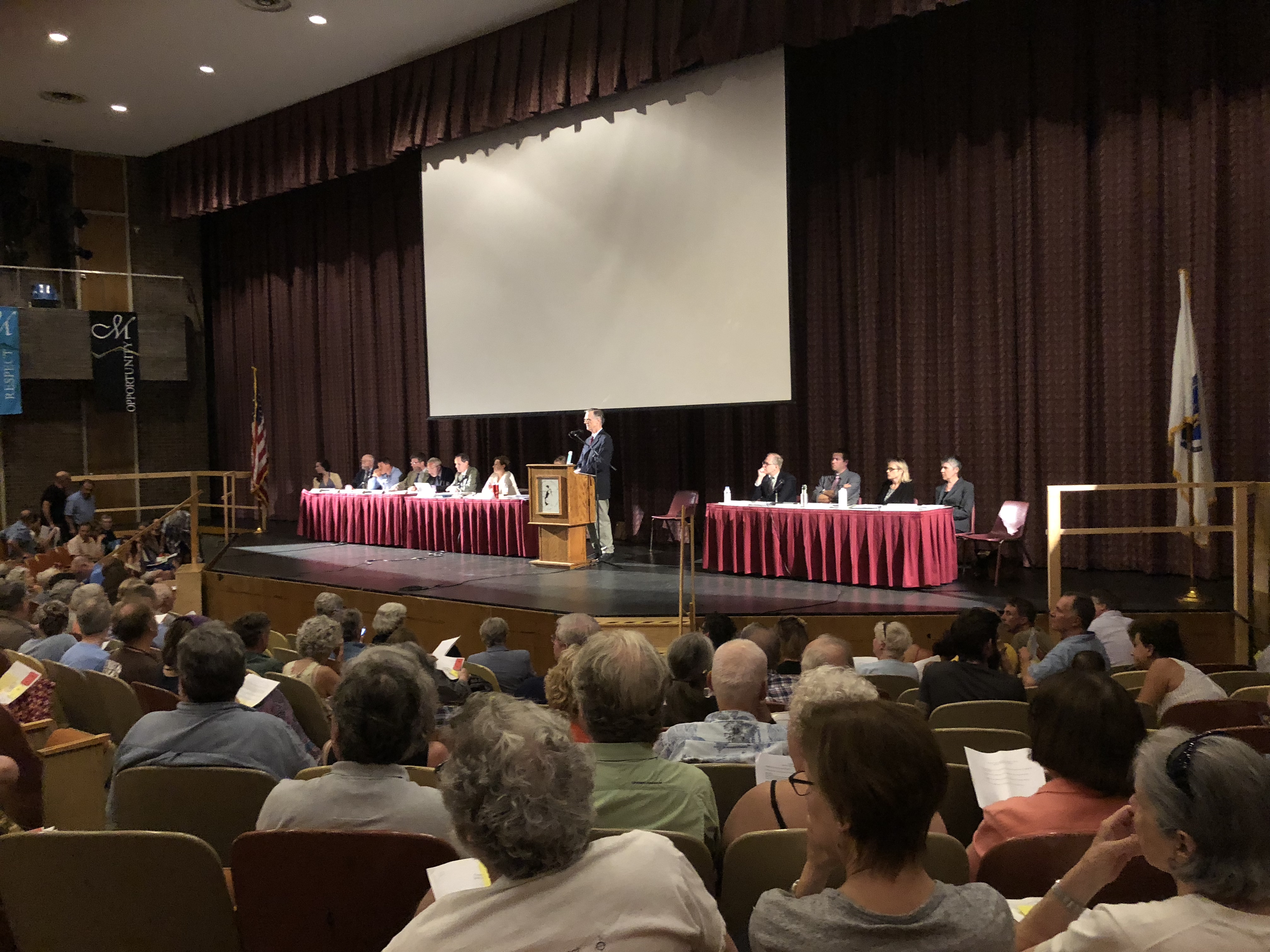 But when it was over, opponents of the town’s plastic water bottle ban had suffered another stinging defeat while the residents who live near Gary J. O’Brien’s trucking business on Blue Hill Road will have to continue the fight in pursuit of some semblance of peace and quiet.

The defeat of the effort to repeal the plastic water bottle ban points to what is now an indisputable fact: For better or worse, Great Barrington is now a solidly progressive community that prides itself on getting in on the ground floor of environmental issues.

Five years before the water bottle imbroglio, town residents approved a ban on the sale of thin-film plastic shopping bags with handles. Current advocates of the water-bottle ban point to the success of the so-called “plastic bag reduction bylaw.”

And this phenomenon points to yet another reality: The divide between the natives and those from outside the area is as wide as it’s ever been. Don’t take my word for it or judge based only on last night’s meeting.

Take a look at the post by Egremont resident Karen Berger lamenting the divide on the Great Barrington Community Board Facebook page. As of Tuesday afternoon, there were more than 500 comments, some of them off-topic — this is social media, after all — but many appeared heartfelt and even soul-searching.

Nowhere is this division more evident than on the plastic water bottle ban. Most of those who spoke in favor of the repeal appear to be either natives or people who had lived in the area for decades. The woman who organized the petition for the repeal, Laura Keefner, has lived in town for 45 years.

Another woman who spoke out for repeal, Emily Fahey of Housatonic, said she is part of five generations of a family that has lived in the town. Fahey argued against paternalism by those who think they know better.

“Never in my life has someone told me what I can and cannot drink out of,” Fahey said. “I’m an adult. I am educated. You should trust in me to make the right decision.”

At the annual town meeting in May where the ban was initially passed, one of those arguing against it was Andy Moro, who chairs the Republican Town Committee.

Many — but not all — of those who favored keeping the ban moved here from elsewhere, or perhaps started out as part-time residents. They were passionate and spoke of the need to lead by example.

Wendy Kleinman, who helped organize the original ban as a member of the environment committee of the Berkshire Women’s Action Group, said, by her estimate, Great Barrington residents were responsible for generating 1 million single-use plastic water bottles per year.

But there was also action group member Anni Crofut, a Berkshires native, who made a passionate plea to retain the ban and rightly noted that recycling is not the answer because China, which previously took most of our recyclable plastics, no longer accepts them.

But more than anything, the vote of the repeal confirms the near collapse of political conservatism in Great Barrington. Five years ago, Republicans in the town thought they were making strides in “taking back” their town like Sheffield did, as they told me at the time.

They were riding a wave that crested with the rejection by Great Barrington taxpayers of not one but two $50-million-plus reconstruction plans for Monument Mountain Regional High School. Republicans were so emboldened that they practically drafted young John Beebe, son of conservative firebrand George Beebe, to run for selectman. Those hopes were dashed when the young and untested Beebe was trounced by current selectman Ed Abrahams, a progressive.

But the GOP resurgence was not to be. Republicans have gone the way of the dinosaur in Berkshire County, which is the second bluest in the state after Suffolk, the county that includes the city of Boston. Call it what you want: Great Barrington is now liberal, progressive and forward-thinking.

Other divisions were evident during the meeting, as well. Matt Masiero, co-owner of Guido’s Fresh Marketplace, attempted to speak but was shouted down by those who didn’t want to hear his voice because, though a Great Barrington business owner and taxpayer, Masiero lives in Richmond.

In a letter to the editor of the Edge, the Masiero family had supported the water-bottle ban but moderator Michael Wise had announced in advance that Great Barrington residents would have first crack at speaking.

“I feel like I’m at a Trump rally here,” a disgusted Masiero fumed as he walked away from the podium.

If ever there was better evidence of the waning conservative influence in Great Barrington, it’s the margin of defeat for the repeal effort. In May, the ban passed by a show of hands that I estimated at 2–1 in favor. Despite a substantial social media and public relations push and more than 500 residents in the auditorium, the repeal effort last night fell short by almost 100 votes: 296–199.

“I was disappointed with the tone of the meeting,” Abrahams told me afterward.

Over the weekend, Abrahams had proposed in a letter to the editor that the implementation of the ban be postponed until next May. He said he decided against making the motion after finding little support for it on either side of the aisle.

“My motion wasn’t entirely in order, either,” Abrahams said. “It would have essentially undone the other motion.”

The other matter that proved contentious was the failure of the town to approve the purchase of 11 Roger Road, where O’Brien’s trucks are driving the neighbors to the brink of a nervous breakdown, or so it seems.

The short version is that O’Brien’s property predates zoning and his use of it for trucking in an otherwise residential zone is grandfathered. But neighbors and code enforcement officer Edwin May insist he has expanded his operations over the years, which he may not do without a special permit.

The matter has been tied up in court for years, with about $30,000 spent by the town in legal bills and an estimated $100,000 total that will need to be spent to end the matter with court proceedings that could take years.

Last night the selectmen and the finance committee proposed buying the property for $298,000. Click here to read our last article on how that proposal came about and to review the history of the controversy.

See video below of the discussion last night of the proposed purchase of 11 Roger Road:

The proposal sparked a lively debate between those who thought the residents deserved relief and those who feared that “buying off” O’Brien would set a terrible precedent that would embolden other zoning violators to refuse to budge and simply await a payment from the town before ceasing and desisting.

This is one of those cases where both arguments have substantial merit. Yes, paying O’Brien to go away sets a terrible precedent. But innocent parties settle nuisance lawsuits all the time. And yes, settling could invite further litigation, but you do a cost-benefit analysis: Do we lose more from inaction than we do from paying the offending party to go away? If the answer is yes, then you write a check.

There seemed to be confusion in the audience regarding the clean-up of any environmental problems a review might uncover. Selectboard Chairman Steve Bannon said the purchase-and-sales agreement stipulated that the town could back out of the deal or expense it to the seller if the remediation effort proved too expensive. However, I did not hear Bannon say how expensive was too expensive.

Taking into account the purchase price, the legal fees and the environmental assessment, Abrahams conceded the town would likely lose money on any resale. He is to be commended for his candor but the admission might very well have sealed the proposal’s fate.

Part of the problem is that property owners who run afoul of zoning regulations are considered violators of civil law. That means if the property owner does not comply with a cease-and-desist order, for example, the town’s only recourse is legal action. And the violator’s avenues for appeal appear to be endless, which is why the billable hours accumulate for both sides.

If, on the other hand, chronic zoning violations were considered criminal acts, things might be a little different. If an offender had to spend a night in jail, get bailed out — or run the risk of establishing a criminal record — zoning violators might think twice before flashing the middle digit at town officials.

After a call to vote, Wise announced that the article, which was the last on the warrant, would need to pass by a two-thirds majority. At 199–149, the article gathered a majority but failed to pass because the winning margin was insufficient.

That total was about 150 voters fewer than cast ballots for the plastic water bottle ban repeal. So lots people left after the first article and the fourth. There was some suspicion, most notably by Edge reader Craig Okerstrom-Lang, that the loss of voters cost the 11 Roger Road article a victory.

Say what you want, but the neighbors who have suffered as O’Brien has made a mockery of the town deserve better.