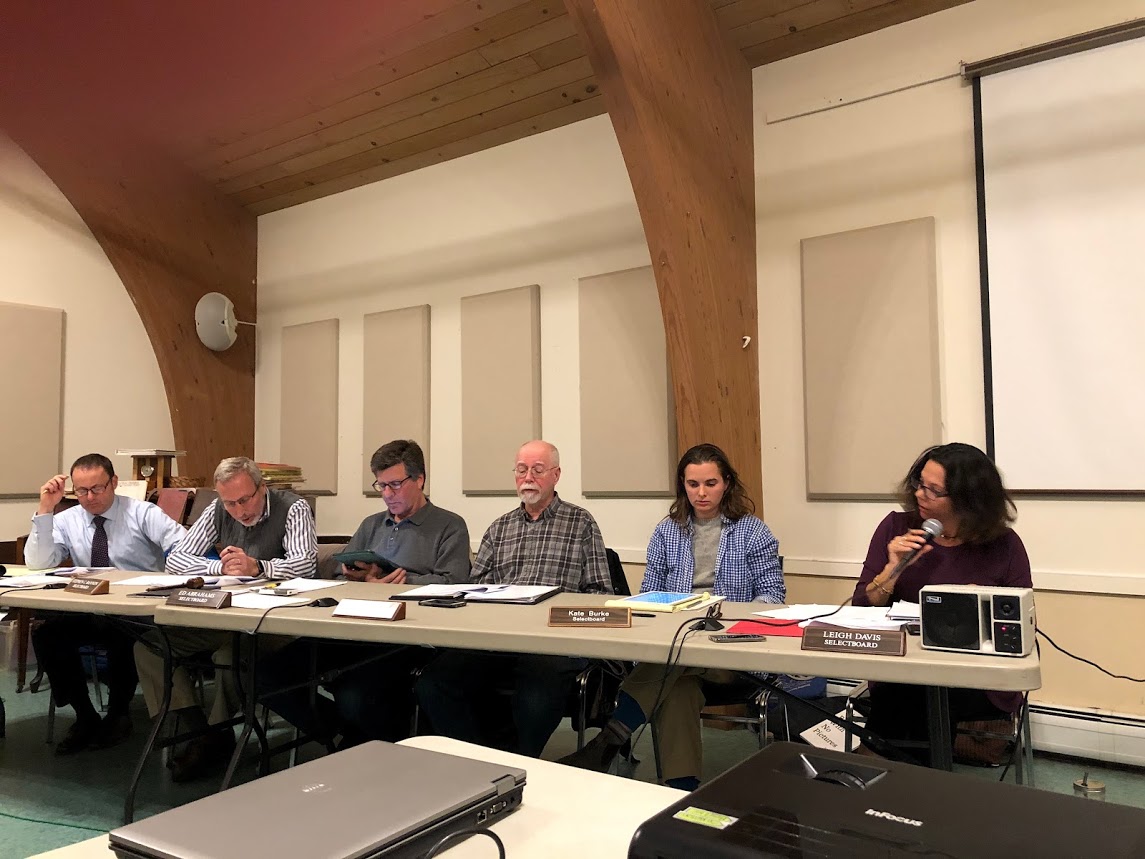 Great Barrington — A noteworthy schism on the Great Barrington Selectboard has been exposed by an exercise that is typically one of the quietest and least controversial tasks the board undertakes.

At its Nov. 13 meeting, which contained a packed agenda filled with multiple updates about roads, bridges and traffic enforcement, a board review of its own policies and procedures escalated into a battle between three members of the board and its most recently elected member, newcomer Leigh Davis.

Davis openly questioned why her fellow board members wanted to revise certain policies and whether they were a response to actions she has taken since her election to the board in May.

At a meeting earlier this month, the board had first taken up the proposed changes, which included making it more difficult for board members to place items on the agenda and another measure that would prohibit board members from commenting outside of a meeting on matters that might come before the board again as part of a public hearing process.

The proposed changes (click here to read them, along with the subsequent revisions) also had some teeth: “Any member who is found by the board to have violated the policies and procedures may be removed from a committee or other assignment by the chair, and may be subject to public censure by the selectboard.” Davis was vice chair of the town’s economic development committee but recently resigned.

See video below of the proposed policy changes and the discussion:

Before the discussion on Wednesday, Davis read a statement. Click here to read it. Of the proposed change in the procedures to require a majority vote of the five-member board to place items on the agenda (since abandoned), Davis said:

“Any attempt to squelch the minority vote has no place in our town’s policies. Although this proposal has been withdrawn following public pressure, it begs the question as to why this was proposed in the first place.”

Discussion of the proposed changes followed Davis’ placing of an item on the agenda at a board meeting on July 22, not long after she learned through media reports that the town was not represented at a public hearing in Boston on July 1 before a legislative panel that would effectively enable the return of horse racing to the Great Barrington Fairgrounds.

After asking in advance that the item be put on the agenda, as selectboard members are entitled to do, Davis raised a series of questions about the lack of local control. Public pressure subsequently caused state Sen. Adam Hinds, D-Pittsfield, to withdraw his co-sponsorship of the bill.

Activists later succeeded in filing a home-rule petition to the state legislature that would allow Great Barrington residents to weigh in on the possible return of horse racing to the fairgrounds. The petition accumulated hundreds of signatures, easily enough to allow residents to provide input on the controversial subject through a special town meeting, which has been set for Wednesday, Dec. 11, at 6 p.m. at Monument Mountain Regional High School.

On Wednesday, selectboard Chairman Steve Bannon said he withdrew the proposed policy change that would require a majority of the board to put an item on the agenda. He characterized it as “probably an overreach” and “an idea that I had floated” in case a board member wanted to post an item that, in the opinion of the chair and the town manager, was not ready for discussion.

“It was out there for deliberation,” Bannon said. “I talked to some other former chairs and they thought it was a bad idea so I took it out. So we didn’t even have to discuss it … It wasn’t to stop a minority opinion, by any means.”

Most of the other controversial proposed changes, such as the restrictions on outside discussion of issues by board members and on citizen speak procedures, were recommended by town counsel David Doneski, Bannon said. The policies also included a proposed code of conduct for board members, which also caught Davis’ attention.

Selectboard member Kate Burke, who was elected in 2018, had been working on a code with Bannon since last fall because, she said, “I was new to this and I wanted to do a good job.” She had obtained copies of such codes from other towns, such as Pepperell in Middlesex County. Burke also noted that Great Barrington does not have a new selectboard member orientation process in the same way that, say, a school committee would.

“And I felt like there was a lot of different ways in which people were operating and I was looking at our selectboard policies, which doesn’t currently have these kinds of things in it, and it doesn’t really outline specific ways to do this job as a selectboard member,” Burke said.

The proposed policy passed by a margin of 4-1, as did most of the others. In discussions, Davis raised the question of language, such as the inclusion in the code of the terms “discretion,” “binding” and “personal benefit,” which, she argued, were overly subjective.

“So that’s why I’m making this request,” Davis said. “I’m sorry that it seems that I’m making this unduly complex but I do have reasons, and for future board members, it’s respectful for us to know that when we request something to be on the agenda and then it’s turned down, we don’t have to wait to read the agenda packet on the website.”

Davis’ motion failed for lack of a second. It was that kind of night for her.

Another measure proposed to limit the ability of attendees to address certain matters during the public comment section of selectboard meetings, known in Great Barrington as “citizen speak.”

Bannon said Doneski advised the board that entertaining comments concerning matters on a special permit that were slated for a later public hearing might expose the board to charges of bias.

Davis characterized the proposed policy as “an overreach.” She proposed to let meeting attendees meetings speak “but not as part of the record.”

“I think it’s really important that citizens, when they make the effort and are engaged, that they speak,” Davis insisted. “And I have a very big problem about limiting citizen speak here, so I am strongly against this.”

Like many of the other motions that night, this one passed anyway 4-1. The rest of the proposed policies, starting at Section 10, were tabled to the board’s next meeting Nov. 18.

During citizen speak, West Stockbridge resident Maureen Quigley stepped forward to defend Davis and scolded her colleagues for the way they treated Davis. But first she asked if any of the selectboard members had conflicts of interest in the matter of Fulcrum Enterprises, which proposes to build a controversial cannabis manufacturing facility on VanDeusenville Road. None declared such a conflict.

“It was a little disconcerting being in the audience when Leigh was speaking and the behavior that was [exhibited] towards her during these discussions,” Quigley said to applause. “Things being ‘silly’ or ‘piddling’ — and i just found that really upsetting the way she was treated when she was trying to openly speak.”

Davis was also approached by another woman, Rachel Collins Kelly, after the meeting adjourned. Davis said Kelly was “visibly upset” at the way Davis was treated. Davis later told The Edge she did not know either woman and had never spoken to them.