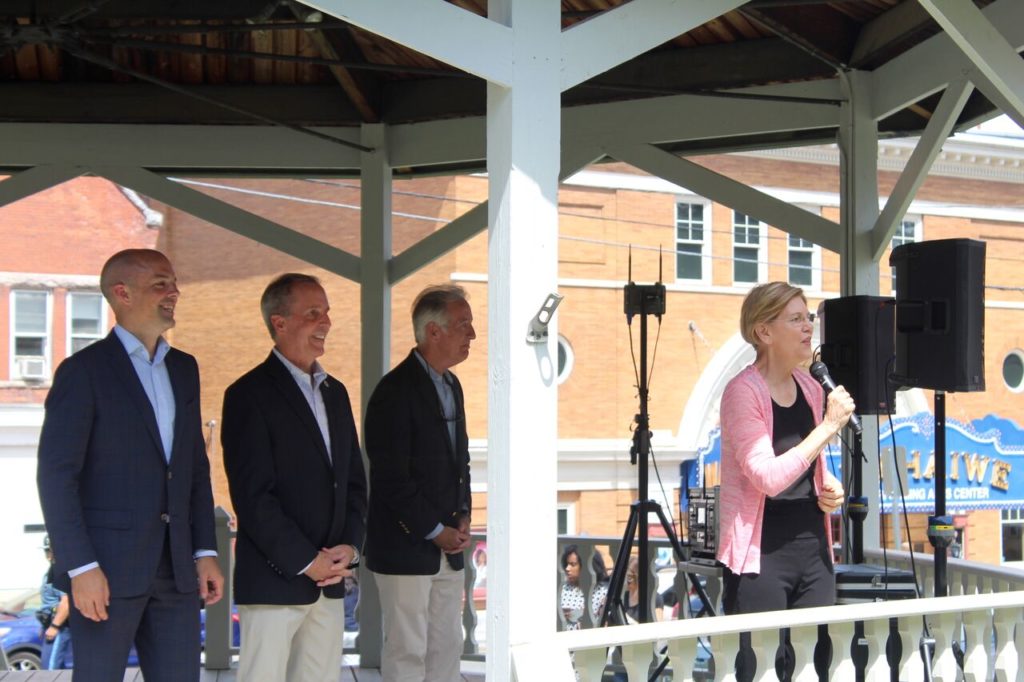 Great Barrington — In the first televised presidential debate between challenger Richard Nixon and President John F. Kennedy, those who watched the event on their TVs overwhelming thought Kennedy had won while those who listened on the radio believed just the opposite. The most common explanation for this disparity is explained by a phenomenon in politics: What you look like when you say something can be more important than the words leaving your mouth.

Such a spectacle was on display before this writer and some of the 200 others lying on the lawn around the gazebo behind Town Hall Sunday as we listened to the remarks of Sen. Elizabeth Warren, D-Massachusetts, through a speaker system set up by the campaign. The difference in reception from the audience inside the Mahaiwe Performing Arts Center auditorium and the reaction from the overflow crowd outside was palpable.

See video below of Warren’s remarks to the overflow crowd that had assembled around the gazebo:

Amid speculation about a 2020 presidential bid and a Senate race in November, Warren adopted a new speaking tactic and abandoned her previous style, which was a signature mix of policy wonk and school teacher peppered with fiery liberal rhetoric. Instead she embraced the well-worn path of a campaigner—making a more cynical appeal for quick applause by promising to fight the Republicans and leaving the details of that fight for another day.

The shift in tone presents a contrast to the senator’s remarks during a previous town hall in the Berkshires last summer, at Berkshire Community College in Pittsfield. This may well be the result of management. Yesterday’s rally was organized by the senator’s campaign committee, not her Senate office. It could also be that last year’s town hall was held amid a GOP fight to repeal the Affordable Care Act, and the conversation had a clear focus. Whatever the reasons, it’s worth noting the change.

Last summer, Warren answered the question (one she admits she is asked at every town hall) of what citizens disgusted with politics can do to make a difference. Back then, Warren prescribed a list of ways people could effect change, from canvassing on doorsteps, calling their representatives, tweeting, organizing local meetings to discuss the issues and registering young people to vote. Yesterday, she responded to the same question by saying, “everyone needs to get in this fight.” She added that talking to people who disagree with you is also important.

The most striking example of Warren’s embrace of quick and catchy applause lines came on the question from Jennifer Daley, who drew applause herself when she expressed her frustration with the emphasis of testing over learning to think creatively in public schools.

In the answer to her question about how to improve the public education system nationally, Warren said, “We could start by getting rid of Betsy DeVos,” but moved on to the next question before outlining a plan for what she and her colleagues in the Senate could do once DeVos is out. Through the speakers, the audience outside the auditorium could hear this remark being met with thunderous applause, but only a few people on the lawn clapped. A woman behind me remarked to her husband, “She didn’t really answer that question.”

On the topic of pollution and the environment last year, the senator spoke about putting pressure on companies like GE via a carbon tax, banning offshore drilling and fighting Republicans to allocate more money in the federal budget for the EPA. At the Mahaiwe, she had this to say on the matter: “Right now, we need to do as much as we can as quickly as possible to better protect our Earth.”

After about an hour of sitting on benches and laying on the lawn, attendees outside began collecting their bags and heading to their cars. When the topic of immigration surfaced and Warren told a story about visiting a detention center in El Paso, Texas, more attendees left. Her story ended with a declaration, “We are not a county that separates children from their families.”

The last time she answered a similar question on immigration (at BCC), Warren spent nearly 10 minutes detailing her support for the Dream Act, which would provide legal status to undocumented immigrants who were brought to the U.S. as children.

As Warren made her closing statement and waved to the audience, the crowd inside gave her a standing ovation. Meanwhile, at the gazebo, those who remained clapped politely. By the time Warren stepped outside the auditorium, those who had been grumbling outside about the vagueness of her answers cast away their disappointment and ran to get in line for a photo. There is no doubt that, for many of them, she remains a hero on the left.