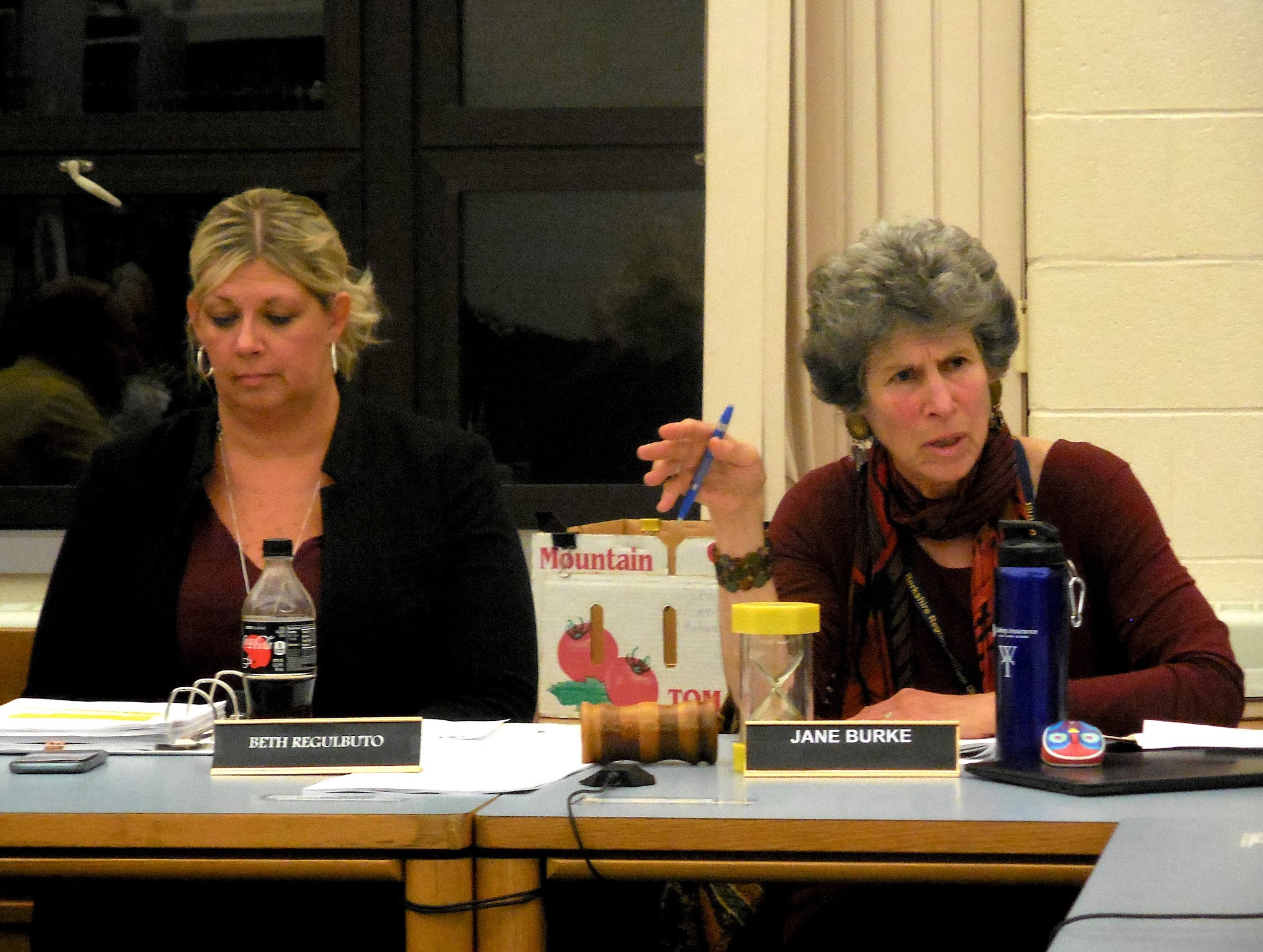 Sheffield — If ever there was any uncertainty about whether the Southern Berkshire Regional School District is in crisis, that doubt was removed after Thursday night’s school committee meeting.

The school committee has found itself embroiled in three open meeting law violation complaints, with a fourth likely on the way. Both the committee and its embattled superintendent and her special education director are the objects of whistleblower complaints from employees.

Both employees have complained of workplace retaliation and one has filed a lawsuit seeking damages. Online petitions have been formed by district residents to demand that action be taken against the superintendent.

It was that kind of night. Indeed, the atmosphere was tense enough that two Sheffield police officers were called to observe the school committee meeting lest things get out of control.

When committee Chair Jane Burke opened the floor for public comment, Jennifer Brown, whose mother Maryellen represents Monterey on the committee, walked briskly to the table and distributed her second open meeting law complaint this month against the committee. Click here to read it.

Brown alleges that after a closed-door session at a special meeting on the previous night, the board emerged and adjourned the meeting. Brown says a quorum of the committee stayed after the adjournment and “held an illegal meeting.”

“They deliberated and repeatedly scolded, intimidated and retaliated against Maryellen Brown for whistleblowing their previous violation,” Jennifer Brown wrote. If true, as alleged, that action would be a clear violation of the state open meeting law, which prohibits a quorum of a public body from conducting business or deliberations outside a noticed meeting.

The “previous violation” Brown initially complained about concerned an email Burke sent to all nine of her fellow members on the morning of Oct. 7 after receiving a message on the previous day from this reporter that The Edge was working on a story about a lawsuit and whistleblower complaint from longtime district employee Kurt DeGrenier. That email, which was disclosed by Maryellen Brown, also appears to be a blatant violation of the open meeting law.

In an email to The Edge Friday morning, Burke declined to comment on the latest complaint about the post-meeting activity, other than to say: “We are in receipt of the Open Meeting Law Complaint from Jennifer Brown dated October 24th. The Southern Berkshire Regional School District School Committee will meet to consider and respond to the complaint in accordance with the Open Meeting Law.”

The committee then had to vote on whether to go into executive session last night in order to discuss with counsel what has become known in some circles as the “email scandal.” The closed-door session was proposed, according to the posted agenda, “to consider an Open Meeting Law complaint” against the school committee.

The agenda item cited several state statutes purporting to support the executive session, though the irony of discussing an open government complaint behind closed doors was not lost on those in the audience.

That prompted a scolding by former school committee chairman and Alford resident Carl Stewart, who insisted that holding an executive session on the open meeting law complaint was “completely improper.”

“The fact that on advice of counsel, you cited a number of statutes is . . . what we call bootstrapping in the law,” said Stewart. “It doesn’t make it proper. And one of the statutes cited is the Massachusetts Privacy Act, which has absolutely no relation to this.”

Stewart, a retired attorney and former federal prosecutor, performed some research and discovered case law on open meeting laws in New York and Oregon, which he said, “track very closely with Massachusetts” and are “very similar.”

“All of them hold that this is an improper executive session,” Stewart said. “And by the way, if that meeting is held in executive session, you’re going to have another open meeting law complaint by me tomorrow.”

For good measure, Stewart also lectured the committee on yet another open meeting law violation. That clear violation happened last September when the committee voted to elect a new chairperson via secret ballot.

Burke nevertheless moved last night that the committee go into executive session but said she would brief counsel on Stewart’s concerns. Member Bonnie Silvers, also a former chair of the committee and a one-time ally of Stewart, said she was unconvinced of the necessity of going behind closed doors.

See video below of the school committee discussing an open meeting law complaint and whether to go into executive session to discuss it:

Member Dennis Sears insisted it was much ado about nothing: “To be as polite as I can, it’s a rather specious, if not totally foolish, attempt to create havoc by using the open meeting law as a means of trying to stir something up.”

Member David Travis objected to even considering the matter because he was convinced it was not a violation. He said there were no deliberations in Burke’s email because none of the other committee members responded to it.

See image below of the relevant portion of the state open meeting law guide:

The vote to go into executive session was 8-2, with Silvers and Travis objecting for completely different reasons. The committee emerged after about half an hour. Burke read a statement that “acknowledged that any opinions contained in the Oct. 7 email should properly be discussed in an open meeting pursuant to the open meeting law.”

Burke insisted that any error was unintentional and added that, “the committee has also voted to explore options for additional open meeting trainings for our members.”

See video below of school committee Chair Jane Burke reading a statement acknowledging the committee should have discussed the contents of the email in open session:

Looming over the proceedings is the specter of an administration in crisis. The embattled superintendent, Beth Regulbuto, is the subject of the aforementioned lawsuit and whistleblower complaint from her former dean of students, whom she had demoted. The suit seeks unspecified compensatory damages “in an amount to be proven at trial, plus triple damages, attorneys’ fees, interest and costs.”

A second complaint from special education case worker Brenda Olivieri alleging workplace retaliation and poor management has been lodged against Regulbuto and student services director Sandra L. Hubbard. Olivieri made her complaint in an email to the school committee but has not yet filed suit.

Two separate Change.org petitions have been started concerning Regulbuto: One calls for her outright removal as superintendent when her contract expires in June and the other requests a vote of no-confidence in her.

Regulbuto was hired in 2017 to replace the retiring David Hastings. She is in the third and final year of her current contract. Prior to coming to Southern Berkshire, she was the assistant superintendent for business at the Hampden-Wilbraham Regional School District. Click here to see her LinkedIn profile.

Stewart, who played a role in negotiating Regulbuto’s employment contract when he was on the school committee, later said if the committee does not act on her contract by Sunday, Dec. 1, then it is automatically renewed for one year.