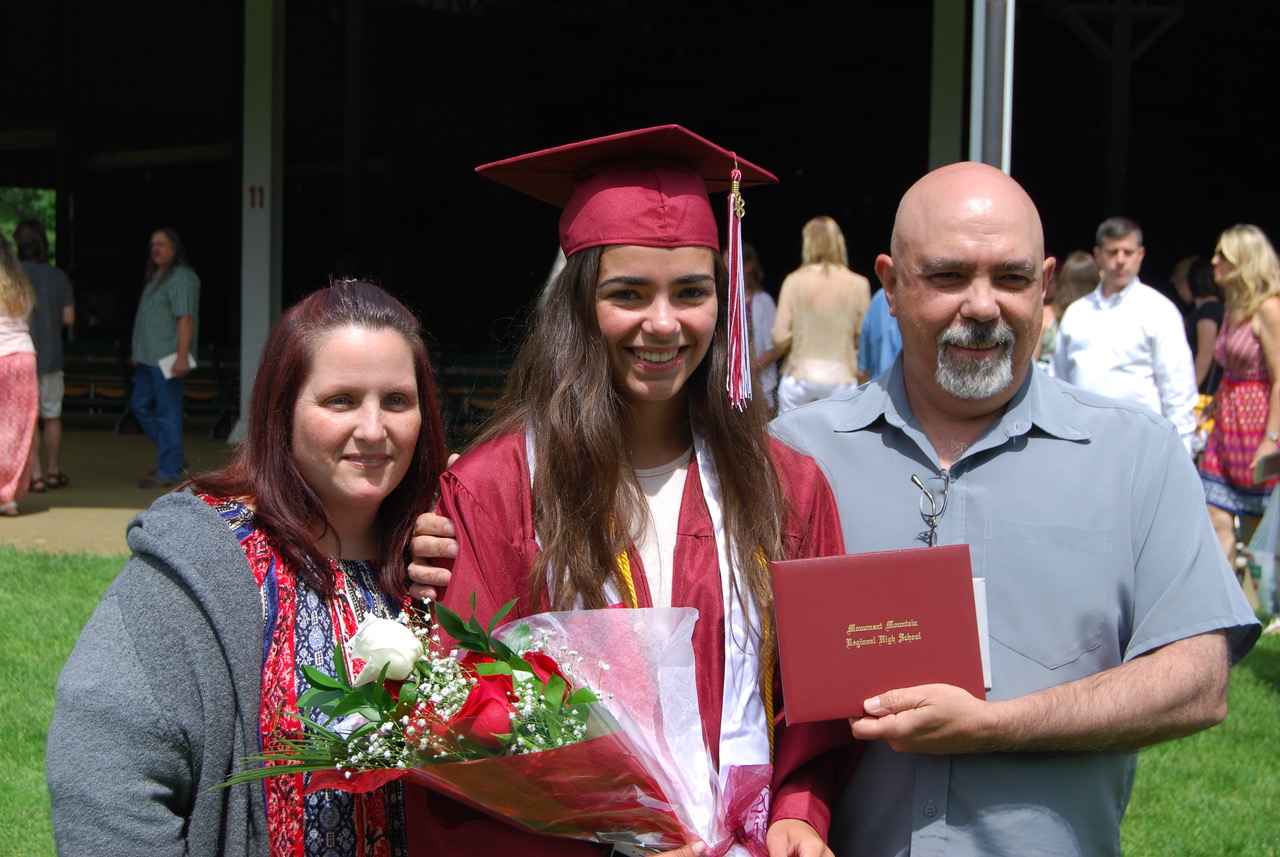 Savanna Nolau, center, stands with her mother, Linda, and father, Isaias, at her graduation from Monument Mountain Regional High School in Great Barringotn. Nolau is one of the first recipients of the Chang-Chavkin Scholarship. Photo: Bruce Haggerty

On May 31st, Monument Mountain Regional High School held its annual senior awards ceremony, where over 100 small scholarships are presented to graduates every year through athletic booster clubs; the Berkshire Crafts Fair; Rotary Club; family funds managed by Berkshire Taconic Community Foundation; at least one second homeowner family who, according to head of guidance Mike Powell, “appreciates what kids can do here”; and another family who supports a group of seniors with $4,000 per year for all four years of college.

But when the director of the Chang-Chavkin Scholars Program, Nancy Roseman, took the stage to announce the details of the new mentorship/scholarship program she is managing, she heard a gasp from the audience. Selected students will receive a total of $60,000, $15,000 per year for all four years of college.

This first year, one graduating senior, Savanna Nolau, has been selected from Monument, along with one senior at Drury High School in North Adams. Savanna was chosen from a finalist pool of 10 students. Two incoming Monument seniors, Stone Murphy and Jennifer Salvatore, will receive the scholarship as well as extensive college application mentoring. Savanna lives in Otis and will attend Suffolk University’s program in Madrid, Spain, in the fall.

Below is a complete list of the 2018 finalists and winners.

Recipients will be called the Chang-Chavkin Scholars after Arnie Chavkin and Laura Chang, founders and funders of the program and part-time residents of New Marlborough (They’ve started a sister program based in Telluride, Colorado, where they also have a home). Recipients of the scholarship must meet income requirements and be first-generation college-goers in their families.

Mike Powell, head of guidance at Monument, said of the program — and of the Chang-Chavkin interview committee made up of Nancy, Arnie, Laura and admissions and financial aid professionals from Amherst and Williams, among other highly selective schools — “They were so thorough and thoughtful. I could tell how invested they were in each candidate.”

In addition, the eight student finalists will each receive $2,000 for college costs (One reason finalists were not selected is they’d limited their applications to community colleges and the Chang-Chavkin Scholars program is only supporting four-year institutions).

Step one for the four incoming seniors is to come up with their own lists of colleges that meet basic requirements (urban versus rural, large versus small, highly selective versus less so). Said Roseman of that process: “There’s all these criteria kids need to sit down and reflect on for themselves. You start off not with ‘I wanna go to Dartmouth’ but with some self-reflection.” The point is not to just get students into college, either, but to ensure that they graduate (Just under half of all American college students graduate within six years from the school they started with, according to Forbes Magazine). Providing first-generation students with financial support is not adequate if successful college completion from schools that match their potential and interests is the goal.

Nancy Roseman knows a lot about what it takes to get to college and make the most out of it. She graduated from Smith College in 1980, and earned a doctorate at Oregon State University in 1987. She taught biology at Williams College between 1991-2013, and served as dean from 2000-2007. She oversaw the process of Williams providing support for its increasing diversity and changing financial aid policies, going “need blind” for international students in its admissions process. She paid close attention to changing socio-economic demographics and how to support low-income students. From 2013 to 2016, she served as the first female and openly gay president of Dickinson College in Pennsylvania.

While there, Roseman became interested in the field of first-generation student support through serving on the selection panel for the Gerry Lenfest Scholars program for students in rural Pennsylvania. That program started in 2002 with five schools and five kids and, this year, worked with 25 high schools and 34 students. The main challenge she found with that work was “getting kids to aspire to competitive schools. They didn’t understand they could get into those schools, or about how financial aid works. For example, at private colleges you can get better packages than at public schools. It can be cheaper to go to Skidmore than to UMass.”

Roseman thought about how to plant seeds for a Lenfest program elsewhere and came back from Dickinson in 2016 wanting to work with kids. Her wife, Lori, said, “Why don’t you build something here?”

Lenfest agreed to fund her planning year, but first she had to sell them on why “America’s premiere cultural capital” needed such a program. “Everyone thinks we live in this wealthy place, but I explained the real demographics.” Nearly two-thirds of North Adams students are economically disadvantaged and, according to the newest free and reduced numbers for Berkshire Hills students, so are 55 percent of Muddy Brook Regional Elementary School students.

Roseman’s work happened to coincide with news, through a Lenfest board member, of a Columbia University alumnus — Arnie Chavkin — who was thinking to do scholarships in the Berkshires. For Chavkin and Chang, that move came about due to a confluence of circumstances. They’d retired from the New York financial world and “We were at the point in our lives thinking about what our charitable activities should be.” The 2016 election was also an inflection point.

They both come from first-generation college family backgrounds and they wanted to make an impact on increasing educational attainment for students in similar situations, though in non-urban settings.

City kids, Chavkin points out, can take a short subway ride from home and get off in a whole new world. But: “We’d noticed in rural areas, kids’ horizons are much more circumscribed. There are fewer resources, fewer programs, college counseling is under-resourced. There are a lot of smart kids who don’t tap into their potential. They don’t know what’s out there. College is a whole different language for some of these families.”

Chavkin would like, ultimately, to include 20 to 25 student scholars each year and: “Our only metric is college graduation. That’s it. We’re not interested so much in which schools, we’re not trying to get kids into Ivy Leagues, but we want to be up above 90 percent in the rate of four-year graduation. I know that’s ambitious, but that’s how we approach this.”

The program’s larger goal is to impact college application systems for participating high schools. The committee’s extensive expertise — on the shifting landscape of financial aid, what academic programs schools are known for— will assist guidance counselors, whose caseloads can comprise hundreds of students and whose work on any given day may have nothing to do with college application assistance. “We’re already talking with them about how to work with our juniors [incoming seniors],” said Powell.

Roseman and her committee will be working on three separate tracks this coming school year. One will be starting up the second round of junior recruitment, with initial applications likely due in January 2019. Together with school guidance departments, she will be putting into place a rigorous support system for the current senior scholars, including SAT preparation, college and financial aid package research, and in-person college visits.

For the two college freshmen scholars, Roseman will aim to instill a resourceful approach to finding help and answers. “If you face kids with the problems they are going to face once in school, they have more resiliency around it.”

As for this year’s Chang-Chavkin Scholar from Monument, Savanna Nolau, it’s a fierce work ethic, ambition to always strive higher and striking confidence, among other qualities, that got her where she is now. She also had her eyes on the college prize since she first came for a tour of Monument, and credits the school for her success. “I love Monument, I wouldn’t change it for the world. I love the people, the opportunities.”

While there, she participated in the internship program, which introduced her to the marketing department at the Red Lion Inn where she’s also worked for the past four years as a busser and server, and to the Key and Pathways service clubs. A two-week trip to Ecuador with her Spanish class in 2017 also inspired her current interest in studying in Spain. Savanna thinks she’d like to study international relations in college, and do work that contributes meaningfully to society.

She’s overflowing with gratitude for the faith the Chang-Chavkin committee placed in her, though she said her final interview with them was “the most nerve-wracking half hour of my life.” Clearly she did not let her nerves get the better of her. When the committee asked Savanna why she deserved to be selected, she responded, “Because I’m worth it.” They believed her.