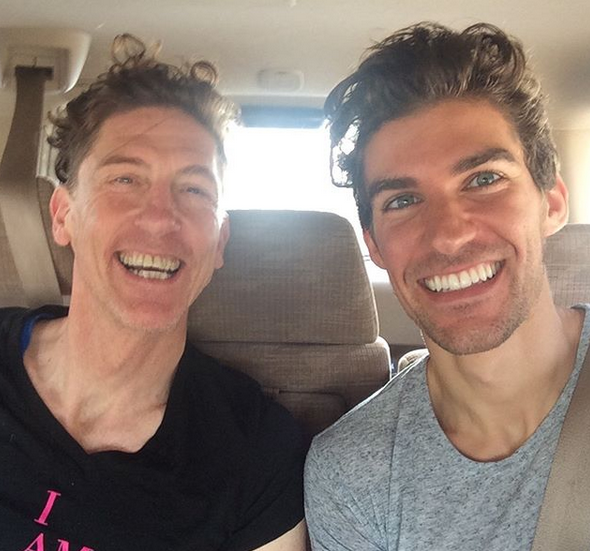 Tom Truss, left, became an uncle to Ben Palacios, right, 30 years ago; now that Palacios is an uncle, too, the timing seemed auspicious to launch their new podcast, 'Ask Your Gay Uncle,' available wherever podcasts are found. Photo courtesy Tom Truss

Great Barrington — Growing up, Tom Truss could have used an older family member in whom to confide, someone other than his parents who might provide an “outside eye” while serving as an “advocate and an ally” for him. Said Truss, “I always wanted a guncle,” — short for gay uncle — “so when I became one, I took it upon myself to provide my nieces and nephews with acceptance, play and unconditional love … with a healthy side of irreverence and pandemonium!” That was 30 years ago, when his sister’s son Ben Palacios was born; now, Ben is a gay uncle, too, and the uncle-and-nephew duo have teamed up on a mission to spread love and self-acceptance across the land in a new podcast that premiered last month called “Ask Your Gay Uncle.”

“As a queer kid growing up in a conservative suburb, I was either misunderstood, out of place or bored,” says Palacios, who currently resides in Los Angeles. “But every time my uncle Tommy would visit, he’d paint my world in vivacious color. He taught me that ‘different’ wasn’t just acceptable … it was admirable,” he added, citing the genesis of this project: building a shared experience and disseminating it to others. Truss, who toyed with the idea of a call-in radio show for several years, landed on the vehicle of a podcast when Ben became an uncle 1.5 years ago. “The timing of [the launch] came out of the pandemic, but not the desire or the need,” he explained of the first six episodes, which were released June 28, the 51st anniversary of the Stonewall riots (a series of spontaneous, violent demonstrations by members of the LGBTQ+ community in response to a police raid in Greenwich Village). The first episode features a bonus track and interview with David Scott, who participated in all three nights of the riots.

In just two weeks, the podcast has had in excess of 3,500 downloads. As to their intended audience? “Anyone who is looking for love and self-acceptance; anyone who is looking for fun; anyone who wants to feel like they are sitting on the back porch with a margarita letting the conversation meander through all sorts of terrain” is how Truss put it. In short, there are not enough analytics to say who their audience is, but their target is people who want a deeper connection. Each episode features a “Guncle of the Week,” in which the pair introduce listeners to a lesser-known individual from culture, as well as author of “The Deviant’s War”; Laura Aguilar, a brilliant photographer well-known for her portraits of individuals in marginalized communities, including LGBTQ+, Latino and obese; and Bayard Rustin, a leader in social movements for civil rights and nonviolence.

“We’re reaching out and trying to highlight those not known outside of the queer community,” explained Truss, who, in the 1990s, was active in Queer Nation, an LGBTQ+ activist organization with a mission to wipe out homophobia and heterosexism in all its forms. The term “queer” itself, part of what Truss calls “the alphabet soup” that is LGBTQ+, entered the vernacular as a “reclaiming of a word that used to harm, ostracize and vilify us.” Truss, who moved to the Berkshires five years ago, spoke openly when asked how welcoming the Berkshires are to individuals who identify as LGBTQ+: “I find acceptance here; I find openness here; I also find a sense of isolation here partly because many of the alphabet soup family are partnered up,” he explained, which contributes to what Truss called “a sense of containment” that is likely absent in larger communities where there are “tons of single queers.”

Palacios and Truss do a lot of balancing one another out: West Coast, East Coast; 30 years old, 59 years old; guncle, greguncle (that’s short for great-gay uncle). That said, the duo’s shared journey “has deepened our relationship tremendously,” Truss said, adding, “I wouldn’t change it for the world.” Truss values his role as mentor and confidante; partly because he is a gay uncle, and partly because of who he is, he has been able to support his nieces and nephews (he has five in total) by having conversations with them they’d be less likely to have with their parents. And, in doing so, it comes full circle: “I get to provide an outside eye to my siblings and their kids, and can be an advocate and an ally to [all of] them.”

So go ahead and tune into “Ask Your Gay Uncle.” “This podcast is for anybody who wants a gay uncle, a good laugh or a little more color,” says Palacios. That said, Truss underscores: “The podcast is intended for mature listeners. Truly!” Each week, the pair hold each other accountable, play outrageous games and answer listener questions about relationships, sex, family, culture, coming out and more. To subscribe, go to AskYourGayUncle.com or wherever podcasts are found (Spotify, Apple Podcasts, Luminary, Stitcher, TuneIn, Google Podcasts). Interesting fact: World Gay Uncles’ Day this year falls on Aug 9. And, as the podcast’s theme song (written by Palacios) advises: “Ask your gay uncle, ask your gay uncle … ask him all the questions you have in your brain … he’ll do his very best to explain.”