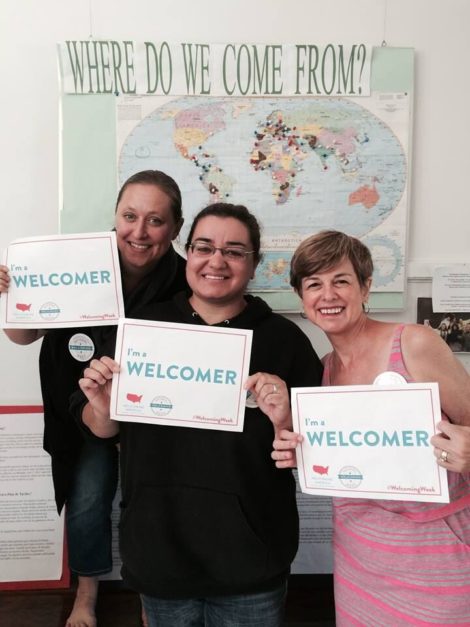 New leadership at Berkshire Immigrant Center in the time of Trump

Pittsfield — It seemed like quite a challenge at the time. In an atmosphere of fear and uncertainty for migrants, the longtime leader of the Berkshire Immigrant Center, Hilary Greene, announced her departure earlier this year, no doubt adding to the insecurity felt by the county’s immigrant community.

After all, Greene had been at the center since 1999, two years after its founding as the New American Citizenship Coalition, and had played a critical role in supporting thousands of clients. Under her leadership, the center had become what its supporters say is a vital force for the county’s growing immigrant and refugee population. Despite formidable challenges and a small budget, Greene saw to it that the center not only survived but thrived. And she will stay on at BIC for awhile as a caseworker.

But as the center and its advisory board began their search for Greene’s replacement, they realized her worthy successor was hiding in plain sight.

For its new leader, the search panel chose a familiar face, Brooke Mead, who has been at BIC for 15 years, for many of those years the center’s only full-time staff member. For much of her time at BIC, Mead has worked closely with Greene, most recently as program coordinator, to ensure successful programming and that the needs of clients have been met.

“Hilary did a great job,” Ethan Klepetar, the Great Barrington attorney who chairs BIC’s advisory board, told The Edge. “We are very fortunate to have Brooke. She just has so much institutional knowledge.”

“When I started, there were three people in a room, we had dial-up Internet and there were no appointments,” Mead said in an interview. “We did our best to answer questions but could not fill out much paperwork.”

The BIC recently completed its move from the First Baptist Church on South Street to St. Stephen’s Church on East Street, just off Park Square. At St. Stephen’s, there is a full reception room, a file room with multiple cabinets, seven private offices and the use of a St. Stephen’s auditorium for special events.

“As we started to see more clients and learn more, our level of responsibility grew,” Mead said of the early years. “We had to keep better records. It’s night and day in terms of where we were then and where we are now. But we have the same core mission.” 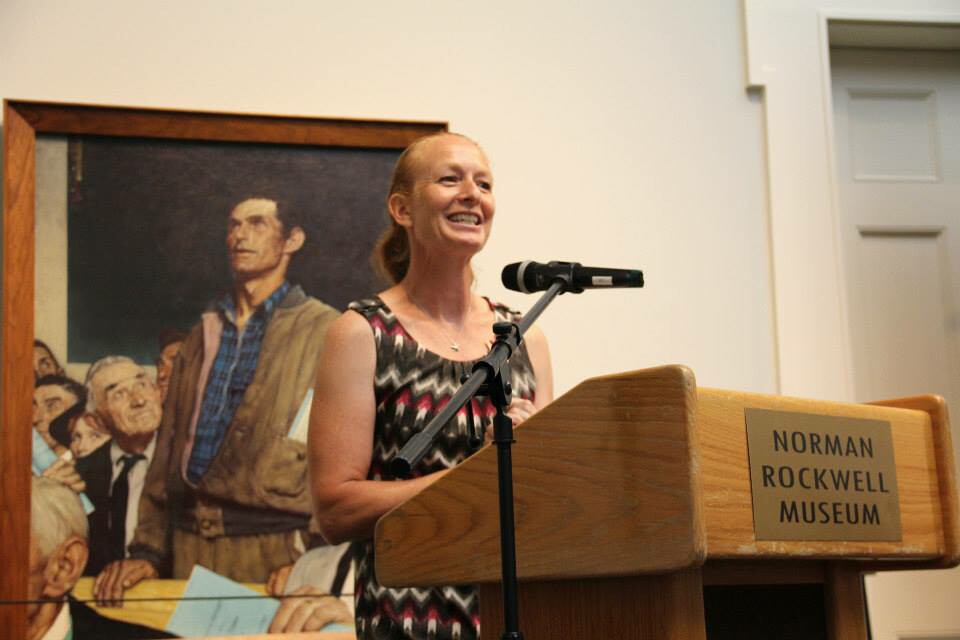 Hilary Greene, former director of Berkshire Immigrant Center, at a 2015 swearing-in ceremony for new American citizens at the Norman Rockwell Museum in Stockbridge.

As a strategic move during Mead’s promotion to director, BIC has hired Ben Fish as a caseworker and has brought on board its first development professional, Sheryl Lechner, a former journalist who has led successful advancement efforts for the Stockbridge Bowl Association and Berkshire Grown.

Mead says 10 percent of Berkshire County’s full-time population is foreign born and that immigration is the only real source of population growth in a county that demands a steady supply of workers for its cultural and nonprofit institutions, which add an estimated $2.4 billion to Berkshire County’s economy according to a study updated in 2012, by Williams College economics professor Stephen Sheppard.

S. Michele Sisselman is an immigration attorney from Pittsfield who has worked with BIC for 20 years. Asked what the value is of BIC to the community, she is succinct: “In a word, it’s critical.”

Sisselman’s only specialty is immigration law. She says Greene and Mead “have been a great team” who are not only competent but “very passionate” about what they do.

“We brainstorm solutions: they look to me; I look to them,” Sisselman explained. “If we can’t come to a resolution, we reach out to the appropriate agency. It’s a big collaboration we have.” 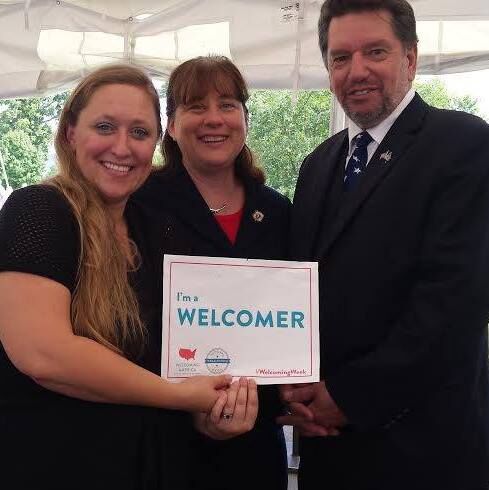 At the same time, she acknowledged that BIC is somewhat isolated, adding that, if you’re an immigrant traveling west from the Boston area, “the turnpike pretty much ends at Springfield.”

“Who else in Berkshire County is serving immigrants with these issues?” Sisselman asked rhetorically. “This is the only game in town. When people have an immigration-related issue or question, they can reach out to various private attorneys or BIC.”

Sisselman said business is brisk at BIC, in part because of the Trump administration’s oppositional stance and policies toward the immigrant community. But she said she has not heard stories about increased harassment of immigrants since Trump took office.

“I don’t want to think that Berkshire County is anti-immigrant,” Sisselman said.

Still, as The Edge has reported, the election of Trump has caused fear and concern in the Berkshire immigrant community – which is saying a lot, considering the dangerous situations many of them escaped in order to come to the U.S.

There have also been widespread and unsubstantiated rumors, on the street and on social media, of increased round-ups of undocumented immigrant suspects in Berkshire County by Immigration and Customs Enforcement since the election of Donald Trump.

Klepetar, the BIC advisory board chair, said, “on one hand, more people might need our assistance, but they might be less inclined to come forward” because they want to lay low in response to the rhetoric and policy initiatives emanating from Washington.

Klepetar emphasized that BIC’s mission is to “help people comply with the law” and that “we’re geared toward helping people navigate the process and become citizens, and also to reunite families.”

And communities seem to be supportive. At least four municipalities in Berkshire County have passed laws adopting a so-called trust policy. At its annual town meeting in May, Great Barrington joined Berkshire County’s two cities, North Adams and Pittsfield, in adopting such policies, as did Stockbridge at its town meeting. Great Barrington’s policy designates the town “a safe and inclusive community” that will not enforce federal immigration law or “aid in the detention, transfer, transport or deportation of residents for civil immigration purposes.” 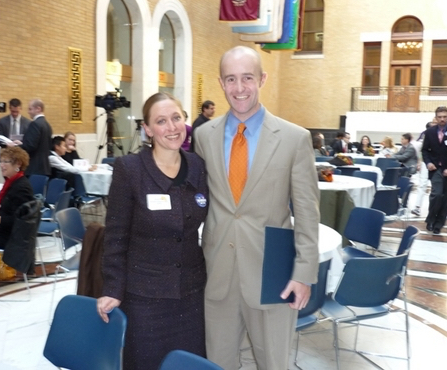 Hundreds of other cities, counties and several states have adopted similar policies. Earlier this year, both the Southern Berkshire and Berkshire Hills regional school districts adopted like-minded policies as they pertain to their own campuses. Similar legislation has been proposed on Beacon Hill but is opposed by Gov. Charlie Baker.

One thing is certain for the BIC: Trump has been good for the bottom line. Fundraising is up. And the center has started a 20/20 campaign ($20,000 for its 20th year) and has almost reached its goal. BIC has done some house parties and restaurant nights to raise money and recently received a grant from the Berkshire Taconic Community Foundation of $10,000 to help fund a bilingual caseworker.

“Lots of people responded saying, ‘No, you can’t say that about immigrants. They are our families and neighbors’,” Mead said. “We had a surge in donations that were unsolicited. And people threw benefits for us.”

Unfortunately for BIC, there is very little state money and no federal funds available to it. However, the city of Pittsfield is making a contribution to BIC of $10,000 this fiscal year, the same as last year. Sisselman said she’d like to see that amount go much higher.

BIC is also using its advocacy education wing to inform and educate both the immigrant and nonimmigrant communities about the issue.

“We’re speaking at colleges and different groups getting the word out,” Mead said.

And BIC is embarking on a strategic planning journey that will determine future staffing and budget levels. But Gwendolyn Hampton VanSant, who leads Multicultural BRIDGE, which works closely with BIC and helped formulate the Great Barrington trust policy, is certain Mead is up to the task.

— Emma Goldman
Read next: Theatre Review: ‘I and You’ at Chester Theatre is a gem