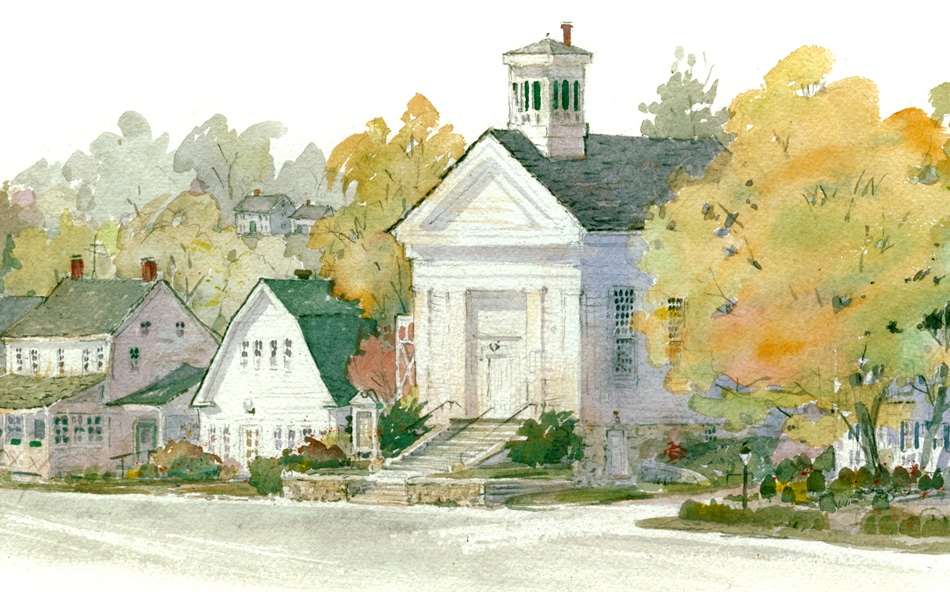 The Monterey United Church of Christ is the site of one of two new food pantires in south Berkshire County. Image: 'Monterey, Massachusetts,' detail, by Leonard Weber, courtesy leonardweber.net

Otis — The reciprocal spirit of giving and receiving is part of what Terry Gould loves about living in Otis. She moved here four decades ago to raise her kids, and one story still sticks in her mind: She was shoveling her driveway after a particularly heavy storm when someone with a plow drove by; before she knew it, the driver had dropped his blade, cleared the end of the driveway where Gould was struggling and was on his way. It’s precisely this spirit of taking care of one another in this close-knit, rural community that led to the launch of a pair of local food pantries in South County over the past two weeks — as local families transition to colder weather and juggle unemployment in the wake of a continued global pandemic.

“People show up and take care of each other; they always have,” Gould told The Edge in a recent phone interview. Two weeks ago, on Sept. 30, a group of dedicated volunteers in Otis shifted the summer food pantry from the Farmington River Regional Elementary School to Town Hall now that students are attending school full-time in the district. Gould, not being one to toot her own horn, calls the new pantry “an extension of what was going on all summer” as schools across the county worked to provide families with breakfasts, lunches and staples for the weekend. Now that school is open, the pantry was shifted to Town Hall (adjacent to the commercial kitchen in what was the former school) to the delight of local residents.

“Everyone stops here for one reason or another,” said Gould of Town Hall, making it a good central location. Wednesday marked two weeks of operation, and Gould reports a bit of a slow start. “The word is slowly getting out,” she said, as evidenced by a steady stream of email and phone inquiries. The pantry’s coffers are currently stocked with a mix of fresh and nonperishable food items; Berkshire Bounty helped fill the shelves with canned goods, local residents have been making donations, and a surprising number of people in town are raising chickens and donating fresh eggs. The intimate nature of this small-town community means personalized treatment: “Let us know what you need [and] if it’s in the pantry, it’s yours,” Gould explained of how supplies have been distributed on Wednesdays during hours in the morning and evening; plans are underway to add hours on Saturdays from 10 a.m. to noon for both donations and pick-ups.

Similar community action in Monterey led to the opening of a food pantry there just last week. “It evolved in a very organic way” is how Andrea DuBrow put it, explaining that food accessibility for seniors became the focus of the Monterey Council on Aging last spring as COVID-19 descended. A group of volunteers, including DuBrow, got to brainstorming beyond seniors: the Berkshires, so dependent upon tourism, would surely be struggling with increased food accessibility issues as people lost jobs. With the knowledge that many Monterey families were getting support through Southern Berkshire Regional School District — and daily breakfasts, lunches and takeaway dinners on the weekends — the group shifted its energy toward creating a pilot food pantry in town.

Mark Lefenfeld and Jay Weintraub of Berkshire Bounty were instrumental in explaining the action steps for setting up a pantry, as was Anne Hutchinson of the People’s Pantry in Great Barrington. This left volunteers space to turn their attention toward securing a location. The large pavilion at the fire station was deemed appropriate for a warm-weather pantry, but the pantry ultimately landed at the United Church of Christ thanks to the generosity of pastor Liz Goodman. “That was really the turning point: a place to do this,” DuBrow told The Edge in a recent phone interview. And so the Monterey Community Partnership was born.

“It really is a partnership,” said DuBrow after launching the first pantry pick-up this past Saturday. News spread by word of mouth, via the Monterey News and in an announcement at church on Sunday. And then the donations started pouring in: There was produce from Berkshire Bounty; eggs, cheese and milk from Highlawn Farm; potatoes, corn, squash and pumpkins from local farmers; and boxes of canned goods from neighbors. “It’s really marvelous,” said DuBrow of the outpouring of support, adding “it’s very interesting [how] people are so self-sufficient here in a certain way” and simultaneously willing to lend a hand. Turnout at the first pick-up was in line with what volunteers had projected: “We had enough to fill about a dozen boxes, and that’s about what we got,” said DuBrow. If getting to the food pantry is an issue, someone will deliver to your door. Above all else, in both communities, everyone is learning as they go.

“I think there is always, in every community, people who have lost a job or are ill or are older that can benefit from a little bit of assistance,” said Gould, adding, “that’s what we’re here for.” Unemployment rates in Massachusetts have skyrocketed over the past six months, leaving many of our neighbors in Berkshire County in a position they never expected to experience. “We have all been in these shoes,” Gould points out, which is why the circle continues: “We have people who have benefitted who then give back,” she said in a nod to the reciprocity that occurs in tight-knit communities. “This community has always taken care of one another. We have always done our giving and our sharing quietly. [Otis] has always been like that.”