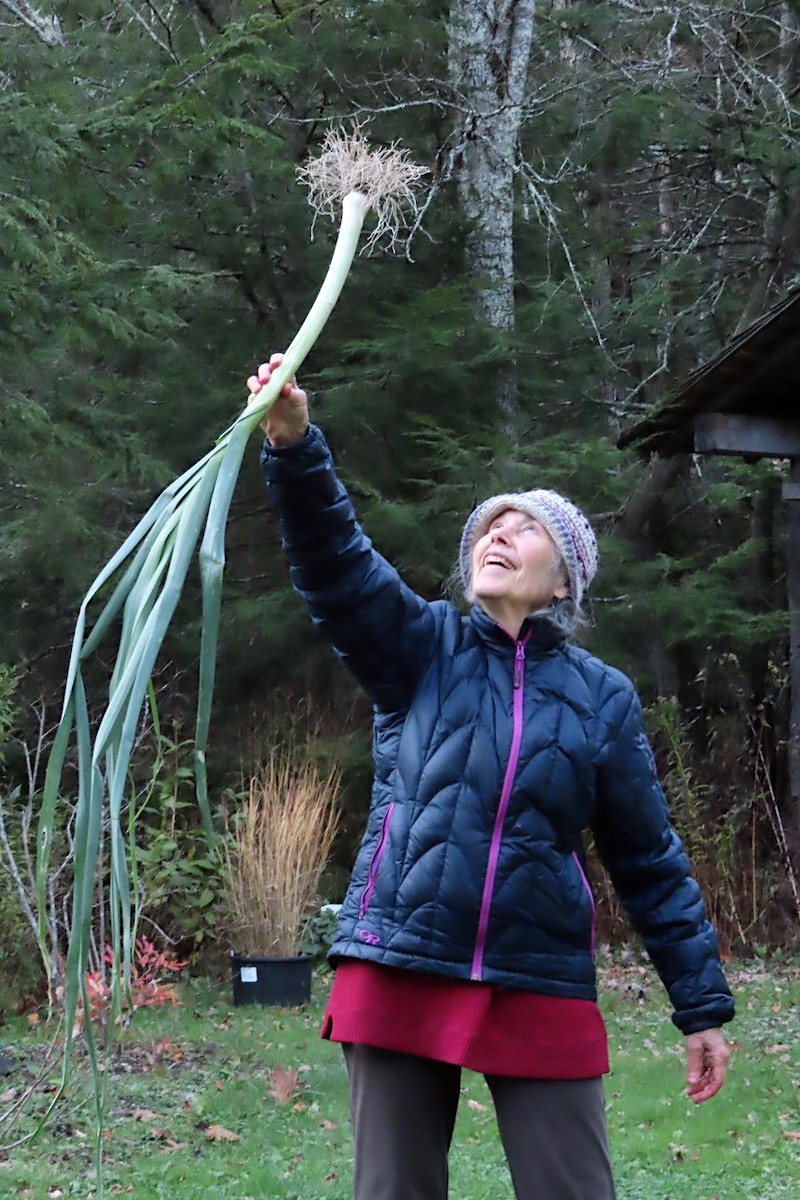 The author catching a leek on the fly in late October 2021.

MOUNT WASHINGTON — Responding to the rhythm of freezing mornings followed by bright, balmy afternoons during the first week of November was exhilarating but deeply concerning. After the autumn equinox, September 22, passed without an anticipated touch of frost, October saw a full month’s surplus of frost-free weather, keeping this gardener suspended, with a sense of loss for the complexity of life adapted over millennia to temperate norms.

According to Edge weatherman Nick Diller, October was the warmest month in his 57 years of weather record keeping in Great Barrington. He reported a low of 32 degrees on October 29, which escaped me, for its imperceptible affect on the warm landscape. A light freeze is defined as 29 degrees to 32 degrees.

The first consequential frost of the season, 28 degrees, did not come until November 3. A moderate freeze, 25 degrees to 29 degrees, is “widely destructive to most vegetation.” This is an astounding milestone. Our concern, for starters, is that opportunistic pest organisms in wild and cultivated landscapes flourished in the absence of a timely killing frost.

On the 3rd, as the Sun climbed to the tops of hemlock trees to the southeast of my garden, I hurried out to celebrate the gleaming, glistening hoarfrost-painted landscape. An expanse of crystal-glazed green leaves, tiny droplets frozen at their tips, was soon touched by the warming rays of the rising Sun and melted away.

A cover crop mix of oats and peas, sown in late September, is particularly beautiful when frosted. After a freeze, greens of frost hardy root crops remain vibrant: sprawling leaves of parsnips, seeded the first of May, and Hong Vit Radish sown in late September. Other autumn foods growing into November include carrots, kales, collards, French sorrel, leeks, flat leaf parsley, and perennial green onions. Cover crops of crimson clover and winter rye persist. The leek in the photograph at the top of the page was catapulted to the author for the first potato-leek soup of the season.

I had harvested all of the fennel, most of the largest Hung Vit Radish, Tokyo Market Radish — a k a turnip — and most of the cilantro and dill the day before the deepest freeze was predicted. The first severe freeze, 23 degrees, occurred on the 6th. A severe freeze, 24 degrees and colder, results in “heavy damage to most garden plants.” My experiment with leaving a portion of the above-listed edible annuals and herbs in the ground through severe freeze proved that all withstand multiple severe freezes. As of this writing, November 11, my plan is to harvest the radish and green onion crops, and to pot rosemary and a sprouted cabbage plant to grow indoors. More about sprouted cabbage, pictured below, when we meet again.