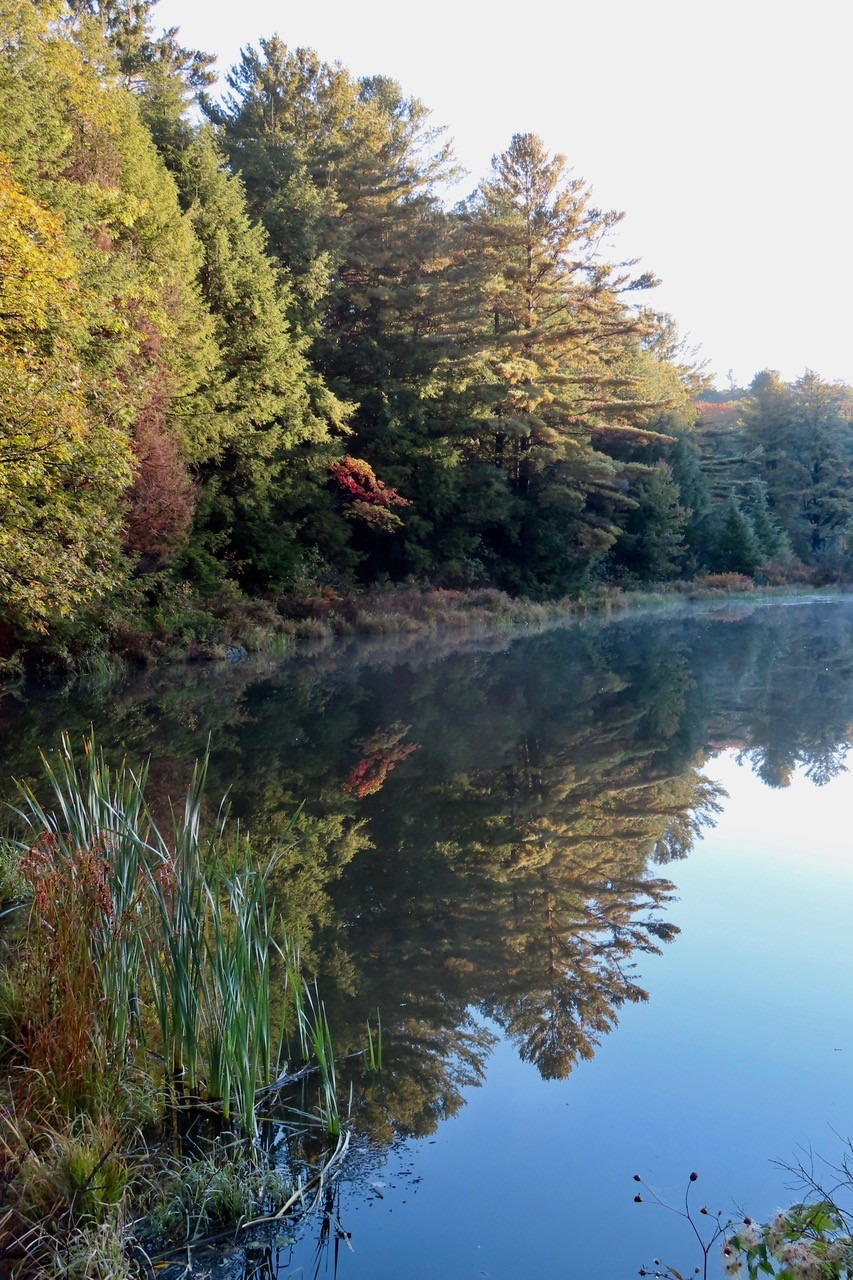 Arriving at pond’s edge, my senses stirred to the expanse of still water rimmed with rising wisps of mist. Above the opposite shore, the fiery white rim of the sun emerged from a dark, forested ridgeline. Nearby sounds of rushing, falling water erupted in my consciousness. Frothy water rushed over the dam and into the streambed that had been drought-stricken for months. That sound washed over and through me, loudly. I had been thirsty for months.

Great sunrays spread out over the hillsides awakening a symphony of vermilion, alizarin crimson, orange, gold, yellow, and green. These are the current colors of red and sugar maple, red oak and beech, all canopy broadleaf deciduous (Latin deciduus, from decidere to fall off, from de- + cadere to fall) trees. Most attractive in the understory, striped maple is also known as goosefoot maple for the shape of its three-pointed, pale-golden leaves. The red compound leaves of sumac are also outstanding. Not to be ignored, evergreen white pine trees are shedding their old needles: See tan-colored bunches of needles behind vigorous green growth.

Foxes are scarce since summer’s kits have mostly dispersed in search of their own territories. On a recent walkabout in a scrubby field, I was delighted to spy a fox in the landscape. As I went on my way, the fox and I kept track of each other. I would pose to photograph and he would stop to get me in focus. Poised at attention, the fox looked and listened intently into the darkness under bushes, hunting. When I picked up speed to head home to work in the garden, fox sped away, too.

In these beds, winter rye seed was sown successively from September 17 through the 24th. Reported to sprout in temperatures as low as 33 degrees, I seeded beds after harvesting the last few leeks on October 3 and 4.

Oats and peas are best planted six to eight weeks before first frost. The bed in the photograph above was sown after garlic harvest in mid-August, and another bed after potato harvest at the end of August or beginning of September. Consider planting oats and peas in spring preceding summer crops.

Cover crops in the autumn and winter garden provide stability and tilth to the soil, organic matter and some nutrition—and to the gardener, a constant supply of wonder.