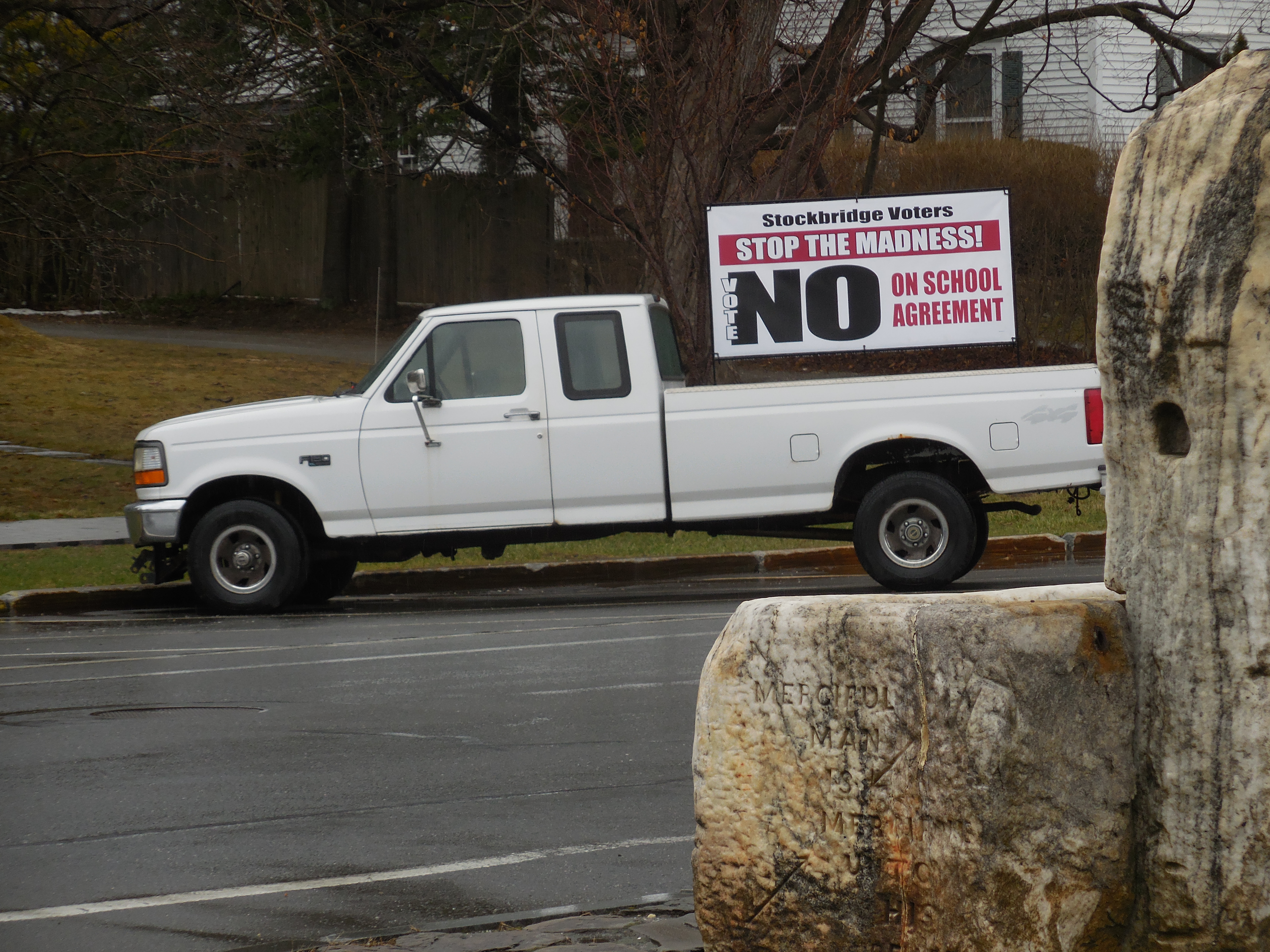 Stockbridge — It’s been the talk of the town this week. In the Elm Street Market, Nejaime’s Liquors and in the Post Office, people were more than curious to know who parked a pick-up truck this week on Main Street across from the intersection with Elm Street. And who erected a large sign on the truck’s bed announcing in no uncertain terms his (or her) opposition to amending the Berkshire Hills Regional School District agreement that determines how much each town contributes to the district’s capital expenditures.

An informal survey by a peripatetic reporter on Friday afternoon revealed that none of the 30 or so people interviewed had any idea who had caused the fuss.

Well, the mystery of the big sign has been solved. The Edge has confirmed that the man who blares his views for all to see is none other than lifelong Stockbridge resident Wilson Wright.

“I just wanted to get my viewpoint out,” Wright said in an interview, referring to his opposition to the proposed amendment that would reform the way property owners pay for the capital portion of the Berkshire Hills Regional School District budget. “I believe it’ll raise my taxes — maybe not immediately — but it’ll happen.”

Wright parked the vehicle on Monday morning and plans to keep it there until Sunday or maybe Monday morning. One week is about right, he said, because he wanted to make sure the part-time residents see it, even though they cannot vote in annual town meeting where the matter will be decided.

The sign urges “Stockbridge voters” to “stop the madness” and “vote no on [the] school agreement.”

Stockbridge Patrol Officer Kirk Nichols told The Edge there are virtually no parking restrictions in that area of Main Street. Indeed, there is no signage indicating any restrictions at all, so there is nothing to prevent someone from parking a vehicle there for an extended period of time. The only restriction for overnight parking is during the town’s snow emergency period, which ended March 15.

The town does a have a signage bylaw, Nichols explained, but in the eyes of the law, Wright’s sign is viewed as temporary.

And of course, there might be also be freedom-of-speech issues if the town ordered its removal because the sign is making a political statement, Nichols explained.

The controversial proposal Wright opposes was endorsed in October by the Regional Agreement Amendment Committee (RAAC) and would change the school district’s 50-year-old agreement so that the three member towns would each pay the same property tax rate to fund the capital portion of the district’s budget, rather than be assessed mostly on the number of students they enroll in the district.

The new formula would not affect how the towns fund the much larger operating budget. Nor would it affect how district residents are taxed to pay for past debt, including the bonded construction costs of Muddy Brook Elementary School and Monument Valley Regional Middle School incurred about 10 years ago.

“Great Barrington is for it — no surprise there,” Wright opined.

That proposed amendment is also viewed as significant because both Stockbridge and West Stockbridge approved reconstruction projects in 2013 and 2014 for the aging Monument Mountain Regional High School, while Great Barrington rejected the required Proposition 2½ overrides, thus vetoing the two projects, in effect.

Wright said he favors Stockbridge pulling out of Berkshire Hills and tuitioning-in its students at the state mandated cost of $5,500, which is about one-third of the current per-pupil costs to member-towns in the district. He estimates this would save Stockbridge about $750,000 per year, though he acknowledged it would be a difficult feat to pull off because the withdrawal of a member town requires the approval of all three towns at separate town meetings.

Others in town are not. Rev. Samuel J. Smith, the priest-in-charge of St. Paul’s Episcopal Church, also serves on the Community Council at Muddy Brook Elementary School.

“I have great faith in the leaders of our schools,” Smith said in a brief interview on Main Street. “The [proposed amendment] is okay with me because ultimately it’s a sound investment.”

As for whether the movement to defeat the proposed amendment is widespread, Smith replied, “My parishioners are not talking about this.”

“I’d like to think that the RAAC, which reached a unanimous agreement on the revised agreement, is representative of the broader community,” Berkshire Hills Superintendent Peter Dillon told The Edge. “I also imagine that there will be many conversations.”

But Wright, who owns Wright’s Garage in Lee, is convinced he’s onto something. We’ll know more on Monday, May 15, when the Stockbridge Annual Town Meeting gets underway at 6:30 p.m. in the gymnasium in the Town Offices building.