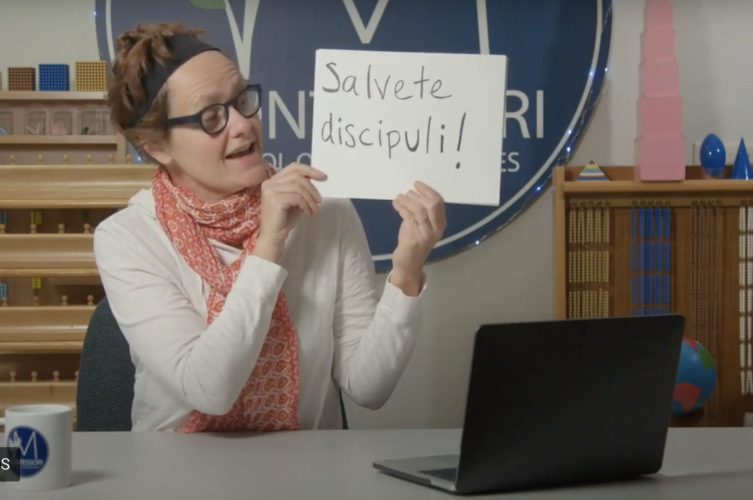 For six school years, I taught Latin to elementary Montessori school students. I use the past tense because I’ve decided to devote myself “full-time” — whatever that will mean for me in the fall, with three school-age children — to writing. My students, apart from a couple of language prodigies, were between 9 and 12, separated into four groups of between six and 10 students. Each group met for 45 minutes on Thursday mornings. That’s not much time, and I am not a classics scholar. No one held ambitions of translating Virgil. But I saw our classes as good preparation for learning the Romance languages, specifically the concept of inflection; that is, the change in the endings of verbs, nouns and adjectives to mark distinctions in gender, number and case. I see my three months of online teaching, just ended, as something else entirely. For those 45 minutes I spent face-to-face with lonely children every Thursday, the “Learning Standard” I decided to meet was: “Draw them in as close as possible.”

Our in-person Latin classes met for years at child-height tables in the middle of our school’s small library. My efforts at keeping order were thus hampered by frequent interruptions from other children seeking books or distraction, who rarely remembered to close the sliding doors behind them. With the addition of a new school wing, we were upgraded to a meeting room meant for adults, outfitted with swivel chairs, which soon replaced the library intruders as my primary source of annoyance. I was compelled to add to my list of admonishments, “Annabelle, sit on your bottom, please!” and “Eli, stop spinning!”

When I was feeling expansive, I’d open one of four windows, which afforded us a grassy view with an alluring hint of the woods beyond. In those days, during the kids’ hour-long recess, they built and maintained elaborate fort villages. With such engaging tasks awaiting them outdoors, I had to keep us on our toes inside, and I was good at that. One day we set up three benches and acted out a scene from our Cambridge Latin textbook in a Roman “triclinium.” We played Pictionary, charades, tic-tac-toe and a ball-toss game where ball-catchers had to shout out the conjugation of the verb “to love,” amare: “Amo! Amas! Amat! Amamus! Amatis! Amant!” We built clay models of Pompeii and created mosaics and frescoes with the art teacher.

One of my instructional shortcomings — already hinted at — was impatience with inattention. If we were working through a passage about Caecilius in the forum, say, and I noticed Annabelle drawing horses — again — I might jab a finger at her and bark, “Annabelle? You ready to read number three? No? Oh, I’m sorry. Was our Latin-learning interfering with your horse-drawing?” She’d peek up sheepishly from between cascades of untended hair. “Sorr-y,” she’d chant, as she’d done many times before. She’d pull her legs out of from under her bottom. She’d pinch up her freckly cheeks, giggle and ask, “So what am I supposed to be doing?”

Then COVID-19 reached us. We were sent home March 13. On Monday, March 16, I started my “Quarantine School Journal” and used what I called “meet.google” for the first time. “I spent time on meet.google with other staff,” I wrote, “to figure out how to pretend to do school with students during what I am assuming today will be the entire spring. I feel strong.” I felt strong despite the fact that it was around this time that each of my days began with another dire New York Times headline, always in outsized font, atop a U.S. map pocked with more and larger red dots of disease than the day before.

On March 19 I arrived at school to find the atrium transformed into a film set, totally dark on one side, lit up bright on the other. A desk and chair had been set up on the bright side, and Vanessa the preschool/kindergarten Spanish teacher was readying herself to read from a script she’d prepared. Someone shouted, “Quiet on the set! Rolling!” She held up pictures of clothing for the camera and said the Spanish terms for them. Next, Launa sang a gentle song for her toddlers. For my video, to be shared with my students on their Google Classroom page, I held up cue cards.

“Salvete, discipuli!” read the first one: “Greetings, students!” I tried to keep it light because I imagined what my students needed was what I needed: reassurance that not everything had changed, that we could, for example, still be playful in Latin class. I put up a card reading “Carpe Diem” and pretended to be deafened by their screaming. “Yes, yes! I know you know what it means, put your hand down!”

They were about to lose a lot of important things, but not everything, dammit. These were the days when people were buying up flour because we craved the comfort of warm dough. I wanted my Latin classes to be like chocolate chip cookies. I wrote in my journal on the day of filming: “It’s not about the material. It’s about the relationships,” and “Everything important is foregrounded now.”

We thought the Google Meet medium would be a stop-gap measure, and at first our Thursday morning gatherings — me with book stacks in the background, William and Eli and Nick and Emma from their pillows, Camille and Ava joining, repeatedly turning to tend to the siblings and cousins they were babysitting — were a novelty. Then a two-week emergency turned into a long-term situation. The students who hadn’t shown up for the first class in March didn’t show up for April classes, either. I reached out to Annabelle’s mom. She left me a message, sounding breathless. She was working 10 hours a day and her husband also had his hands full at their family farm. She assured me Annabelle would report for class the next day, and so she did. I saw her once, blurrily, as though she was peering out of an aquarium. She lost connectivity several times. Then she was gone.

One Thursday a few weeks later, as her classmates pinged one by one to life — Ava, Emma, Fiona, Lucy, Camille, no Annabelle — a heavy sadness fell over me. I was not concerned that Annabelle, who had a good head for language, was falling behind her peers in our study of present tense verb endings. I wasn’t sad she’d be missing the virtual scavenger hunt I’d be introducing to the kids that morning. I knew she found life on a farm much more interesting anyway. I just missed her. I missed her goofy face and her goofy, sort-of-apologetic giggle, her independent spirit. I missed catching her sitting on her feet for the fourth time in 20 minutes, and collecting her paper after class to find the blanks still blank but the edges full of horse busts. How could I have known what a tremendous, once-in-a-lifetime blessing it had been to spend 45 minutes a week with this child?

I’ve been some sort of teacher on and off for almost 30 years. In Milan in 1994, I taught Italian businessmen, who warned me right off that they were “donkeys.” Surely they still do not know the difference between often, never, sometimes and always. I have a photo of them in peak donkey form, shouting out wrong answers at the same time. In 1998 my mother sent a huge box of Swedish Fish to the highlands of Papua New Guinea where I was teaching high school. I distributed the fish one by one to all 604 of my students, with several of the wilier ones taking advantage of my forgetfulness to score a second. Then I left PNG, as I’d left Italy, as I’ve left all my students. What happened to my love? Did it just get applied to the next batch? Is that how love works for teachers?

Years ago, in another journal, I wrote of regret at the end of a difficult year teaching high school English much closer to home: “I wish I had not misspent a moment of their time.” This spring, I worked hard not to misspend a moment of my students’ time. They certainly did not misspend a moment of mine. We craved the comfort of each other’s presence, and I offered at least that, with Latin as the medium. Much more important were our “How are you?” check-ins. I found, to my surprise, a deep well of patience for the many times these got derailed, and took up twice as much time as I’d allotted for them.

There is an obvious pathos in trying to connect through a screen with a child who’s lost the routines and people who give their lives meaning and structure. My compassion for them erased their silliness, fractiousness and childishness. Eli’s intentionally loud yawns, Lexi and Maggie’s dumb argument about who woke up the latest, Tyler’s on-and-off, on-and-off video screen, Freya’s inability to refrain from bouncing, Sunil’s poop emojis appearing in the chat bar long after I’d asked him to please stop chatting poop emojis: All this excused — or rather, all this, just more reason to love them.