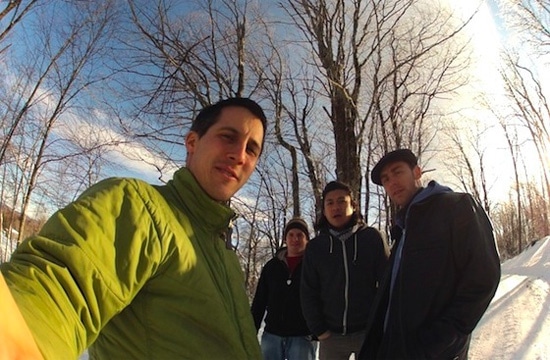 North Adams — Nick Zammuto is a founding member of The Books, a two-piece indietronics band that spanned nearly ten years and found lasting success in art music circles. Recently, he performed with his new band, Zammuto, at Mass MoCA. Joining him on stage was his friend Gotye, an Australian pop star whose song Somebody That I Used to Know is one of the best-selling digital singles of all time.

I caught up with Zammuto after the show:

SB: You played the show tonight with somebody who used to be known as Wouter Andre “Wally” De Backer. How did you meet Wally, now known as Gotye?

NZ: His good friend, Tim Shiel, was a friend of The Books. He’s really funny – we were in San Fransico opening for Explosions in the Sky and Tim had a day off, and this was right after they had performed on Saturday Night Live, and we were at our merch table after our set. This group of Australians come up, and Wally was there; he just bought one of everything on the table. I was like, “thank you so much!” I’m looking at him like, “you guys look like you’re a band or something,” and they’re like, “yeah, we’re Gotye!” I said, “I’ve never heard your music, I’ll check it out.” And, at that moment, they had the biggest single in the world. I didn’t know who I was talking to, so I felt like a moron after that, but he liked our set, and he invited us to open for him on one of his massive tours of 2014.

How did you end up opening for Explosions in the Sky?

We share a label, and we’ve known each other for a long time. As bands go, I think of them as the model for how to be a band. They’re very democratic and make group decisions in a positive way. Maybe it’s the nature of their music; there is no front man in that band, and the way they do business, it’s very straightforward, honest, and based on good vibes.

How does your band work, in terms of writing songs and the business aspect?

Not really, no. Over the years, we’ve forged a brotherhood that’s really positive, but they all have other projects that they’re involved with as well. I sit at home and stew over what’s next, and work on records at my place, and invite them up. It’s really my artistic process, and then I bring them in to collaborate in specific ways. That keeps things simple.

One could say you lead a simple life; you have a supportive wife – first, how many guys are willing to give up a great musical career to be “practical,” and then, how many wives are like, “no, you need to do music!”

She’s seen me when I’m not engaged in creative work, and she doesn’t really like me. I need to do it to stay balanced and be a complete person. She picks up on that. I think it’s for her own sanity as well – she has to keep me on target.

I turned forty this year, and when I got back from tour last fall, I felt old, run down, and thought, “Oh man, this is what it’s gonna be like.” I’m trying to reclaim my youth, trying to get in the best shape I can possibly be in.

What’s your relationship with North Adams?

I’ve lived here for maybe eight years all together, on and off. I came out here to go to school [at Williams College], and then when I was a senior I moved to North Adams into an apartment over on Miner Street, which was fantastic. It was super cheap, and there were no distractions, so I got a lot of music done. Then, I ended up leaving for a while, living in New York City for a while; I lived in Los Angeles for a while, and didn’t see a future there, so I ended up hiking the Appalachian Trail back in 2001, and that brought me down south – I hiked from north to south – and finishing the first Books record at a bed and breakfast in North Carolina. Really surprisingly, people liked that record. We made it for ourselves, and all of a sudden, people wanted another record, so we moved back to North Adams to work on it. We lived in a house that is no longer there.

Which one was that?

It was this awful brown monstrosity of a house. There were like six apartments in that building, and I was the only one in the entire building. It was just bitterly cold. It was cheap, and I had the run of the place.

You’ve cited grunge rock pioneers Nirvana as an influence, and also the rapper Timbaland. What are some ways other people’s music has influenced you?

Well, that was kind of a joke. Timbaland had a song called Too Late to Apologize, but he pronounced it “too late topologize,” so I had to add the other syllable, and then some, to restore balance.

But he basically inspired a whole song of yours.

Yeah, I guess so. That whole auto tune thing, I had to try it just once in my life.

How do influences work for you?

Very subconsciously. I’ve listened to a lot of music in my life – really different kinds of music, over the years. I grew up listening to classic rock, like everybody else in my town, then started getting into harder stuff in high school, like Primus and Fugazi, then also getting into bluegrass at the same time, which was weird. Then, I started getting into Aphex Twin and Squarepusher in college. All that stuff gets mixed together in some way. I’m interested in versatility. I’m not really a brand builder; I just want to try everything, because life is short, you know? I could do the same thing over and over again and probably have a more successful career – it’s just not interesting to me.

You could also put up drywall.

Yeah! It would pay better than what I do.

What are polyrhythms, and why are they not used more in electronic music?

That is a great question. I can’t speak to the second part, because I feel like it’s a mistake that they’re not used more often, but a polyrhythm is basically when you have two tempos going simultaneously. The most common ones are two over three, the other is three over four. So you can do lots of variations on those things and the two fit together like…

He plays some examples using the back of his chair.

You’re very practiced on those.

Yeah; it’s kind of in my blood at this point. I think 4/4 is like the “blue jeans” of music, and I never wore blue jeans.

It seems that every musician in Berkshire County who knows about The Books considers you a bit of a local hero. You split with co-founder Paul de Jong because of personal differences, and you’ve had three years to reflect on this. What did you learn from that situation, and how do you apply those lessons to your new group Zammuto?

Losing The Books was like losing a child. It was hard. I still suffer from it. It was a deeply wounding experience to have lost the project because I worked so long and so hard to develop it and push it forward. To have it end was a drag.

Was it your choice?

With any complicated relationship, it’s a mixture of being forced to do things you don’t want to do and having to make the decision: it was just bringing me down in every way. The only thing keeping me in it was the livelihood of it. That’s not a true motivation, so it had to change.

What was bringing you down – that you couldn’t deal with Paul?

Yeah, there were a lot of problems working with him. I’m not gonna go into the details, but it was not a good collaboration.

Obviously, musically, you guys were still working well together, but just in terms of other stuff?

Listen carefully: you’ll hear what happened. The Books shows started to feel like a glorified karaoke to me, because there were just two of us on stage and we were relying on electronics a lot. I felt like I was just going through the motions, in a way – the shows were a blast, but they felt limited because I wanted a live time keeper on stage. I wanted a drummer, and there was never going to be a drummer in The Books. It was not a possibility. My first order of business when I was forced to form a new band was to find a killer drummer, and that’s how I met Dixon.

He’s unbelievable. You know, I say “benevolent dictator” to describe myself, but he’s become a key member to have, and I rely on him a lot early in the process of writing songs. He lays down a framework to write into, so we do a lot of open-ended recordings early on in the process. I got about halfway through the first Zammuto record before I met him.

He speaks very highly of you, despite the dictator thing.

[Laughs] Yeah, I love Sean. He’s like a brother to me. Everybody else in the band is as well, including my actual brother.

A lyric from Too Late to Topoligize: “You’re my tax return.” Romantic, and so timely as we head into April.

I think any kind of long-term relationship starts to feel like there are obligations that come around in an annual way.

Here are some zammuto videos: