Any lover of classical piano performance who has listened to Simone Dinnerstein’s provocative recording of Bach’s Goldberg Variations would be intrigued to hear her in person. We jumped at the chance to listen to her daring counterposition of Philip Glass and Franz Schubert in the acoustically stunning, elegantly-restored Meeting House in New Marlborough, Mass., on September 17, 2016, sponsored by the New Marlborough Village Association.

Note, please, this excerpt, Bach’s introductory Aria of the Goldberg, and savor each note.

In her spoken introduction, Ms. Dinnerstein urged the audience “to put the program down,” and not to note which of the pieces that ran continuously through each half of the concert were by Glass or Schubert. Rather, if one simply listened, one would perceive “the blurred lines between the music.”

Really, could the piano works of modernist Philip Glass stand up to the magnificent oeuvre of this great romanticist?

Well, here’s the citation for Glass’s just-announced National Medal of Arts, presented at the White House: “For his groundbreaking contributions to music and composition. One of the most prolific, inventive, and influential artists of our time, he has expanded musical possibility with his operas, symphonies, film scores, and wide-ranging collaborations.”

The question couldn’t be answered by obeying Ms. Dinnerstein’s ground rules. So notes were taken, and an evocative image was created. Carolyn’s portrait conveys the depth of the artist’s involvement, sustained through every second of a two-hour recital. Both of us were mightily impressed with the thought and effort that went into it, although, to say the least, the lines between the pioneer of contemporary minimalism and the sublime romanticist were far more frequently bolded than blurred. Some of the similarities across the works (keys, intervals, motific rows) seemed incidental, coincidental, and occasionally forced. But inspiration abounded, and as you can hear in the Aria from the Goldberg, each key was pressed with sensitivity, delicacy, and exquisite care. 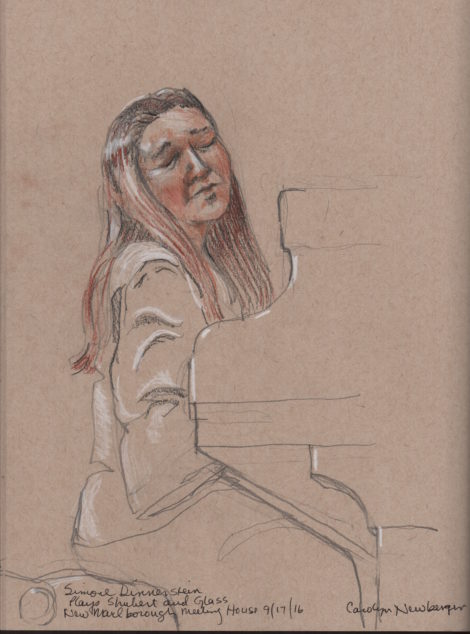 Generally speaking, Glass’s renowned compositional style features repeated rhythmic elements that layer on one another and build tension and emotional impact through increasing textural density and nuanced dynamics. Without question, some of the climaxes are thrilling, and the prevailing moods are trancelike, heartwarming, accessible, and, occasionally, though affecting, intellectually vapid. Verticality reigns, rhythms and chords build and subside in steady marches, and diatonic conjuring of comfortable grooves focuses the composer’s thematic, contrapuntal, and harmonic development. Glass’s predecessors are as much Indonesian Gamelan and traditional jazz as Maurice Ravel’s Bolero, Paul Dukas’ Sorcerer’s Apprentice, and Arthur Honneger’s Pacific 23 and Duke Ellington’s Daybreak Express emulations of locomotives in full whirl.

Better, listen here. Contrast the most fully developed and emotional of the Glass works on the program, replete with astounding shifts to septuple time in his Etude No. 2 (here performed by Andrew Chubb), with Schubert’s Sonata in B-flat (performed by Mitsuko Uchida). Schubert’s horizontality pulls the listener along, eager for the next turn of melody and resolution of non-harmonic notes, moved by the unfolding, song-like compositional inspiration.

When Franz Schubert crossed Dinnerstein’s imaginary line, there was, of course, a sense of familiarity, and, no doubt, for many in the audience, relief. Her performance of his splendid Sonata in B-flat, which completed this daring concert, brought down the house.

Simone Dinnerstein, one may venture to predict, has a brilliant career ahead of her, as a compelling pianist, a visionary programmer, and an inspiring educator. More power to her, we say! More concerts like hers are desperately needed, to make us feel, think, and open our eyes, ears, and hearts to the unfolding legacy of musical composition.