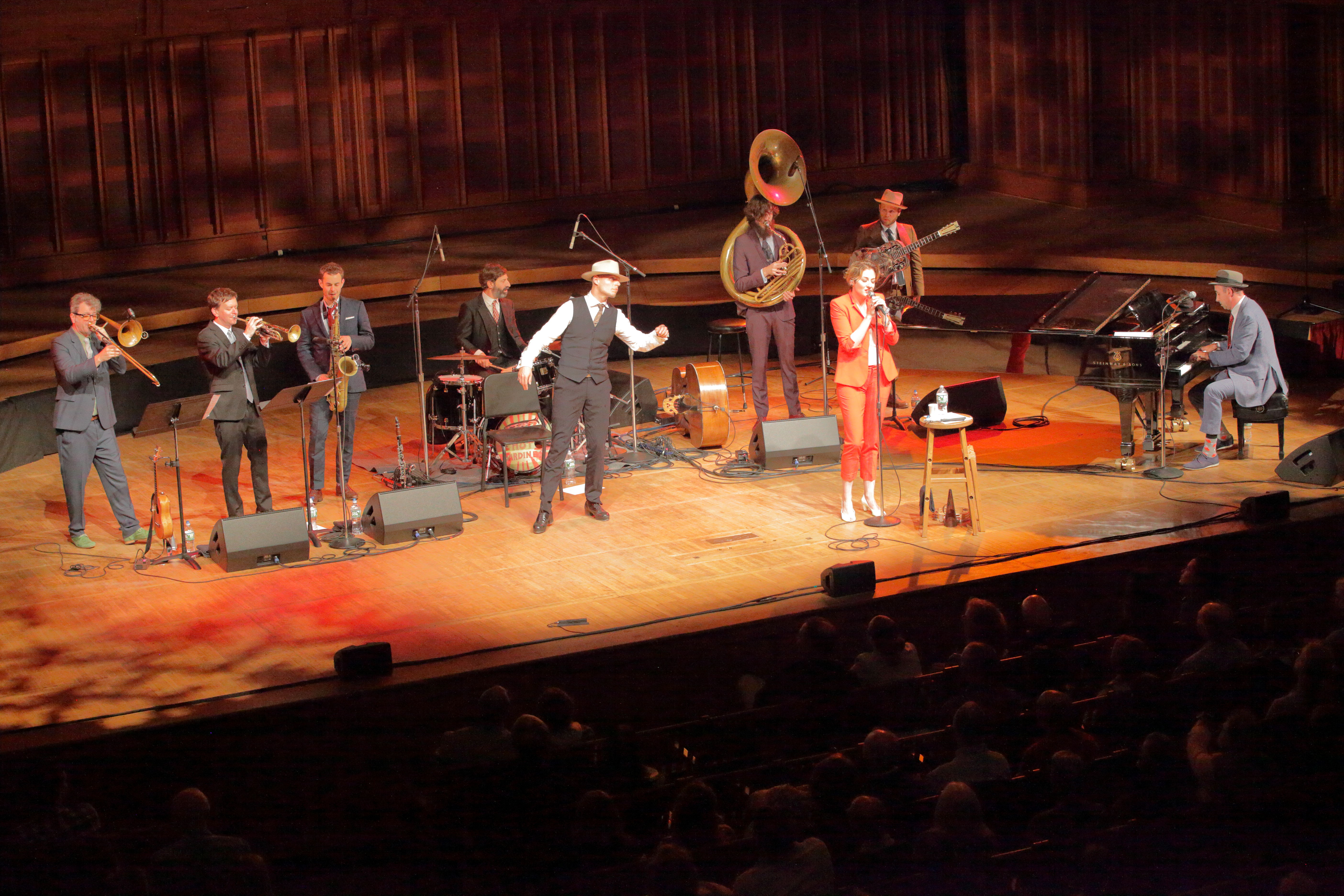 Escaping the rain and chill on June 16 in anticipation of a concert of hot jazz by the New York-based Hot Sardines, your reviewer, who’s performed and studied classic jazz for decades, brought optimism and a strong sense of support to an ensemble of young performers engaged in its contemporary revitalization. (Full disclosure: My most recent recording is entitled “Contemporary Classic Jazz Live.”)

On their website, the Hot Sardines assert their intentions:

“Fueled by the belief that classic jazz feeds the heart and soul, the Hot Sardines are on a mission to make old sounds new again and prove that joyful music can bring people together in a disconnected world.”

On the Facebook page to promote their new recording, French Fries + Champagne, they list as their “Band Interests:”

as well as their “Genre,”

noting what they are “About,”

The program, played without an intermission, consisted of traditional jazz classics (Runnin’ Wild, After You’ve Gone, Why Don’t You Do Right, Petite Fleur, Til the Real Thing Comes Along, and six songs associated with the legacy of Thomas “Fats” Waller: Minor Drag, It’s a Sin to Tell a Lie, Lulu’s Back in Town, Honeysuckle Rose, Dinah); two by George Gershwin (Crazy Rhythm, Summertime), Sweet Pea, Look at Me, composed and sung by Bob Parins, joined by Ms. Bougerol, who also sang three songs in French, including Petite Fleur and L’Amour s’en Fout).

Sadly, notwithstanding their proclaimed intentions, this performance did not begin to express the musical roots and high standards of individual and collective improvising that distinguish the classical jazz tradition.

Take, for example, and compare the Hot Sardines recording below of a popular “Fats” Waller vehicle, Lulu’s Back in Town, to the original:

Note the delicacy of Waller’s pianism versus the ponderous, clunky treatment of Palazzo’s. Listen to how Waller delights in the silliness of the verses with delicious rhythmic anticipations and suspensions, a light, toe-tapping “stride” left hand, perfect intonation and a natural voice, where Palazzo is square, nearly always thumping on the beat, bereft of left hand technique, and in lame imitation of Waller’s vocal, nasal to the point of distortion, frequently flat, and absurdly altering Waller’s send-up of Cole Porter’s exquisite lyric, “Miss Otis Regrets,” to “Mr. Otis Regrets”.

Rather than approach the musical material with appreciation and respect, the songs became vehicles for hokey jokes and exaggerated technical displays.

The one consistently nuanced and modulated performance came from the tap dancer, who picked up the subtleties, syncopations and accents of the many pieces in which he took extended solo turns, demonstrating the special connection between layered rhythm and melodic variation, like the best classical jazz soloists from Louis Armstrong to “Fats” Waller” to Benny Goodman and such modernists who revisit the tradition as Evan Christopher, Hiromi and Wynton Marsalis.

More’s the pity because, with the exception of the pianist, each of the instrumentalists showed evidence of technical skill deriving from classical conservatory study.

There’s an irony here since nearly all conservatories now have jazz departments, but these are typically isolated from their classical instrumental degree programs, which emphasize the classical music traditions. (I know this well from my decades of board service as an overseer of the New England Conservatory and a trustee of the Berklee College of Music.)

Specifically, the Hot Sardines showed neither knowledge nor respect for the African-American blues tradition and the careful listening within the musical ensemble that informs the distinctive textures and counterpoint of serious professional performance.

These classically trained players were able, albeit with frequent and obvious errors, to navigate the harmonic patterns, or “changes,” of the songs. This manifested as a fraught and mechanical exertion, as trumpet, clarinet, trombone and string bass struggled to demonstrate what their instruments could do rather than to subordinate the heroics to the service of honest musical expression.

This was especially problematic in the hands of bassist Crane, whose formidable classical chops betrayed him. He forsook giving a steady and consistent rhythmic foundation in support of his colleagues for high-register acrobatics and ostentatious leaps from the top to the bottom registers. After Crane lifted his large sousaphone to his left shoulder and lit into two numbers, it was evident that this was not his principal instrument. He could barely produce a coherent impulse, much less the lightly-swinging, forward-pushing, 2/4 “oom-pahs” that pieces like “Dinah” call for.

Without a trace of knowledge or respect for the New Orleans “cutting contest,” where famous jazz musicians endeavored to outdo one another–partly in technical display but more importantly in alternating improvisations of challenging and creative musical ideas on an agreed-upon set of chord changes–the trumpet, trombone and clarinet competed in offering increasingly outrageous examples of gimmickry: in reaching, and frequently missing, high notes; in volume, most notably in the trumpeter’s bell-splitting massacre of George Gershwin’s Summertime; and in hokey, juvenile asides which brought chuckles but didn’t exactly entertain the audience.

Who needed to hear a comment about someone’s wearing socks depicting the game of beer pong unless the point was to emphasize his or her professed love of drinking? And what was the point of the dialogue when Ms. Bougerol, in introducing Summertime, asked, “Gershwin?” and a couple of the sidemen proclaimed loudly, “Gersh!?”

To this listener, Ms. Bougerol’s making fun of the name of the distinguished 1930s Chicago recording ensemble the Harlem Hamfats bordered on racism. And her jokey assertion that “Fats” Waller was kidnapped by Chicago gangster Al Capone to play for his buddies but then stayed for three full days because his booze was on the house not only perpetrated an uncorroborated rumor but pronounced a disrespectful allusion to the tragedy of the chronic alcoholism that presaged his pneumonia, which killed him on a cross-country train at the age of 39.

Ms. Bougerol indeed mentioned the group’s dedication to Waller and his music. Apart from Pallazzo’s rough piano, the horns–most especially the unmodulated blatting of Brandenburg’s trumpet–contradicted the subtlety and style of Waller’s “Rhythm,” as he referred to his regular instrumental colleagues of Herman Autrey, trumpet; Harry Dial, drums; and Al Casey, guitar. I played a concert in New Hampshire in the early 1980s opposite a group led by Autrey and am familiar with most of his recordings. What was heard last night in Ozawa Hall crunched against the memory of his richly emotional, crisp, blues-inflected phrasing.

I admit to being a “moldy fig” on the early jazz I so love, to borrow the term used by the beboppers of the 1940s to insult the jazz purists who didn’t understand their music, although I wholeheartedly support its honest reinterpretation by serious musicians of today.

And I wish that the Hot Sardines would swallow their pretensions along with their liquor and listen carefully to the music of their forbears.

I did so, armed with the tools of musical analysis, in this article in the 1977 Journal of Jazz Studies that focused on the “stride” tradition of piano playing in which “Fats” Waller played a central role.

You can scroll down to page 59 to see how Waller fits into this fascinating musical story. And if you’d really like to try to play like him, you can puzzle out my faithful transcriptions on your piano. Do this at home, please, but do it lightly, thoughtfully and, above all, respectfully of the master.