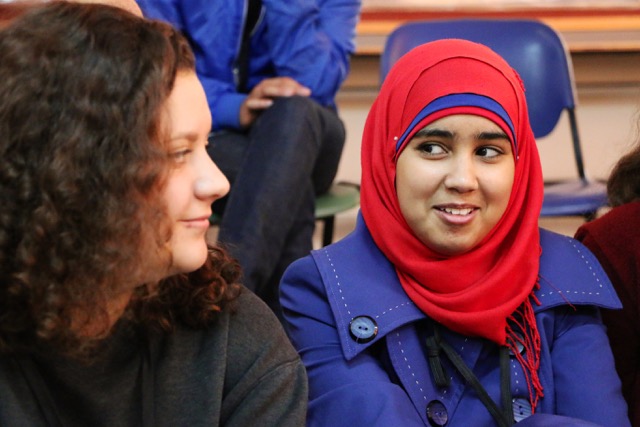 Almost thirty years ago, Daniel Pearl, a young reporter from California, moved to the Berkshires to work at the North Adams Transcript, and then at the Berkshire Eagle. In the few years that he lived here, he became friendly with others who shared his interest in making music.

Pearl went on to other journalistic assignments with the Wall Street Journal which ended tragically in 2002 with his widely publicized beheading by Pakistani militants. It has been 14 years since his grisly execution, but his friends continue to honor his life with musical performances dedicated to his memory.

If you remember Daniel Pearl, or if you are just learning about him, if you like music, or if you just want to be inspired by his unique heroism, you should make sure to go to the Mahaiwe on Saturday, March 5 at 7 p.m. (free of charge, no less!) for Music in Common’s tribute to Pearl.

The evening begins with a 23-minute documentary, “From Madness to Music,” produced by Lynette Najimy of Beansprout Productions, about the community activism prompted by Pearl’s death, The film will be followed by a discussion led by Rep. William Smitty Pignatelli and Anastasia Stanmeyer, editor of Berkshire Magazine.

The evening’s hosts are members of Music in Common, a group formed by Todd Mack in 2005, three years after Pearl’s death. The group evolved from a casual backyard get-together Mack hosted of musicians who had known Pearl here. In the years since, the “get-together” has traveled all over, attracting audiences who did not know Pearl but knew his story. “Sadly, the majority of the world knows Danny Pearl because of his murder,” says Mack.

Music in Common performs here in the Berkshires, across the country, and in Israel. Their performances can have up to 45 musicians in a concert. Since there are no ticket sales, money is raised through sponsorships by local businesses, raffles, auctions, concessions at the concerts, and sale of merchandise.

Music in Common evolved “after a lot of brainstorming encapsulating what we do.” In laymen’s terms, the organization engages in community building with music and multimedia. They identify where there is a need to overcome barriers and then try to do the networking to find partners “on the ground.”

The group’s scope is fairly directed. “We don’t go to Taiwan or the Far East any more. Now our focus is on bridge building between western or American culture and Arab and Middle Eastern culture.” Music in Common visits and performs in underserved communities in areas of conflict. Recently, they spent two weeks on the West Bank working with Palestinians.

Their work with Palestinians involved songwriting and making videos. A Palestinian NGO (nongovernmental organization) had seen some of their work online, and asked them to bring their program to the West Bank. As it turned out, that made an attractive package for grantors.

On their recent trip to Israel, they worked with four different community centers throughout the West Bank. The groups were composed of up to 15 participants of high school or college age. The students wrote songs and then worked on a video project that spoke to the issues they addressed. One group they directed on the West Bank did a program called “I am Palestine,” which the students hoped would change the image of Palestinians from terrorists to doctors, bankers, teachers, and musicians.

In Israel, Arab and Jewish students go to different schools, so Mack’s group paired them for a deeper cultural immersion.

“There’s a lot of intentional dialogue that needs to take place in our programs,” says Mack. “They really open up and speak honestly about what they’re thinking.”

Pairs of schools are required to sign a contract guaranteeing that there will be a get-together once a month. Currently, they are getting pairs of schools together to see the documentary at the end of their school year. And they are working with teachers to help develop curriculum on the issues.

Mack evinces the hope that people who attend Saturday night’s event at the Mahaiwe will learn about the work his group does. “I think that we’ve entered an era where nowhere is sacred, or safeguarded from terrorism or hate crime. Although the Berkshires may not be an ethnically, religiously, or racially diverse community, that doesn’t matter.” He notes that opinions are typically informed from first-hand encounters, so he hopes to draw a large audience Saturday night.

It’s easy to respond to violence with anger, revenge and hatred, but that is not the way Todd Mack and Music in Common see it. They are pleased that Rep. Pignatelli will be co-hosting the evening’s discussion. “Smitty gets it,” he says. “He understands that what we do globally has such relevance to what we do right here at home.”