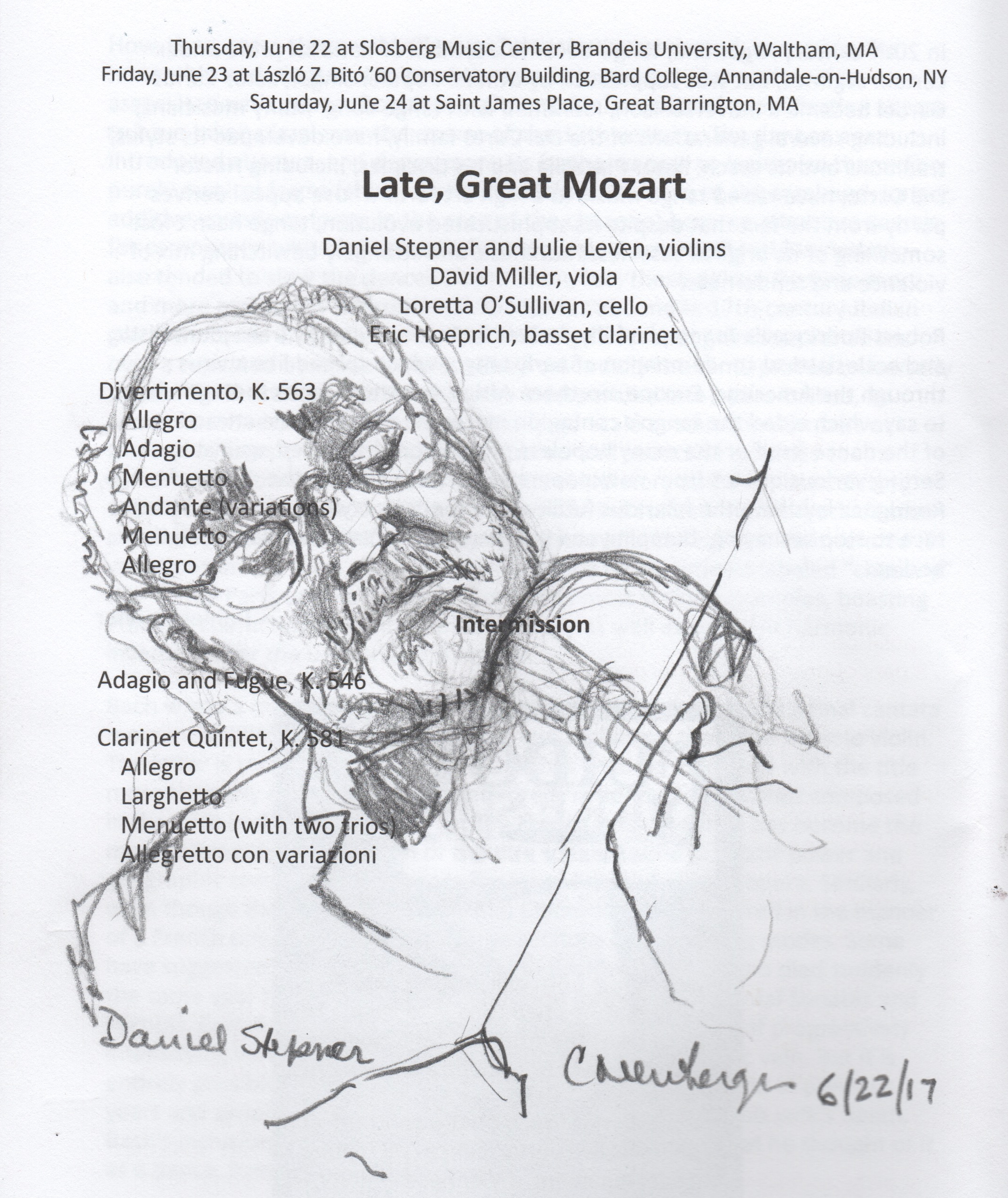 The evening’s concert program on June 24 forms the background of Carolyn’s drawing of Daniel Stepner, Aston Magna’s leader and principal violinist. We offer it as a fond tribute to our friend, and Carolyn’s mentor, Sol Schwartz. An artist, cellist, and teacher, Sol and Carolyn drew their last concert illustrations seated side by side in Ozawa Hall at Tanglewood two summers ago, even as his final illness gathered momentum. Sol’s hand, he said, drew music. All his published works, including Drawing Music, include many such scraps and adornments. So it happened to Carolyn, who grabbed her program rather than her sketchbook at the start of this inspiring evening.

Daniel Stepner’s formidable ability to interpret the complex language of musical composition graced his 30-minute talk before the concert on June 24 at St. James Place in Great Barrington. He illuminated the compositional structure of the first piece on the program, Mozart’s Divertimento, K.53, and provided essential tools for comprehending its structural underpinning. Simple arpeggios, i.e. up and down chords, elaborated into principal themes and the astonishing, counterpoint-driven, complex, forward-looking harmonies. Baroque violin in hand, Stepner demonstrated revealing excerpts.

He noted that it was Costanza, Mozart’s wife, who pushed him to write fugues, which earlier in his career, she alleged, bored him. In the three works offered in this program, fugal writing powered melodic lines that wove together in thickets, anticipating by decades the harmonies of Schubert, Brahms, and Wagner.

The basset clarinet master, Eric Hoeprich, presented the second half hour of the introductory discussion. He gave a vivid description of the evolution of this antecedent of the modern clarinet, a lengthy, pretty, boxwood device bearing an angular proboscis at its nether end, which softens its sound.   Its extra length also lowers the clarinet range a fourth. When deployed to perform works like Mozart’s two clarinet concertos and quintets, it permits playing the notes as the composer wrote them.

Hoeprich, too, was a clear and charming speaker, who illustrated ably his instrument’s challenging technique and satiny sound. He and Stepner are old friends, dating from the founding of the Orchestra of the Eighteenth Century, and it showed, both in the introduction to the concert and in their interaction during the clarinet quintet that concluded the program. Like Stepner, Hoeprich is also a celebrated teacher and musicologist. His book The Clarinet, published Yale University Press, quickly became the bible of the instrument after its publication in 2008.

David Miller, viola, and Loretta O’Sullivan joined Daniel Stepner in this exquisite performance. A long work, it occupied the first half of the program. Such was its richness and the engagement of its performers, that time flew by.

The aforementioned arpeggios were stated in an upward direction in the allegro first movement, quickly morphing from the opening E-flat tonality into F, C, and A-flat major upward tracings, all the while framing a delicious sequence of ambiguous and romantic harmonies. When the arpeggio returned to E-flat, in downward rather than in upward direction, it re-oriented us to the initial structure and atmosphere., Stepner’s introductory wisdom certainly aided the audience’s comprehension of the work.

But the thrusting, daring, intriguing series of question-and-answer phrases across the trio, the dense counterpoint, and the unexpected harmonies over the repeated-note pedal point of the baroque cello challenged us still more, driving excitedly the end of the movement. This was not the Mozart of Eine Kleine Nachtmusik.

Equally, the second adagio movement, after an ascending A-flat arpeggio on the baroque cello, gave way to intriguing complexity. Cello and violin exchanged reciprocal melodic fragments in modulations that cut through a thicket of chords to C-minor. In this a sadder mood, the cello uttered an affecting, soft, ascending F minor triad, presaging a touching sequence of appoggiaturas and leading tones (nonharmonic notes that resolve, respectively, upward and downward) in harmonic atmospheres A-flat, F minor, D-flat major, and A-flat. In the end, again, a downward A-flat arpeggio in the violin signaled a thoughtful resolution through F minor to a re-orienting, upward A-flat major arpeggio, each note of which was ornamented with a long grace note, emphasized and extended in the role of a leading tone. Here was Mozart at the height of his intelligence and insight, presaging the arc of Beethoven and Mendelssohn.

A delicious, surprising sonority burst forth when in this movement the trio played together in their lower registers. Burnished, velvety, dark, it was quite unlike any sound emerging from a trio of modern instruments, except perhaps in works written for 3 or more cellos or contrabasses. But there was nothing outré about this, and Mozart no doubt knew what he was doing.

Toward the end of the Divertimento, double-stops in the baroque cello and viola revealed yet another contrast from their modern counterparts, a dark-and-light quality when poised against the baroque violin. Here was Mozart the orchestrator, utilizing the full resources of the small ensemble to amazing effect. In the resonant St. James Place theater, the vast space resonated sympathetically.

Here, too, is a key to the contemplative mood of the piece. All the harmonic transitions include minor passing harmonies and melodic transpositions. These inevitably yields an emotional tinge sadness, if not a struggle to get back to the starting major tonalities. Perhaps mirroring the burdens of Mozart’s personal life. This was a time of financial adversity, when his performances on piano were drawing fewer people, during an epoch of civil tumult in Europe.

On the subject of St. James performance space, a difficult challenge accrued to the performers emerged in the Adagio and Fugue that followed the intermission: staying in tune. Your reviewer knows this unfortunate story well as a performer on piano, tuba, and contrabass, but he’s not an acoustician. When the ceiling over you is very high, and the ceiling over the audience is higher still, one faces a devilish challenge to listen and coordinate continuously one’s intonation with your chamber music colleagues. It happens to the best of us, and the solution isn’t only to tune up again between movements. Such an effort was made here, but the problem recurred.

Rather, the stage and ceilings need to be tuned to the ensemble, well prior to the performance. Notably in the Berkshires, the South Mountain Concert Series resides in a century-old, purpose-built chamber music hall, which has a stage that bears a resemblance to the inside prow of a submarine. Also in New England, Yale Music School’s Sprague Hall is a similarly lively space with a high ceiling over the audience, but its stage, about the same area as St. James’s, has a narrower conformation and lower ceiling. Both halls derive from the generosity of Elizabeth Sprague Coolidge, the “fairy godmother of chamber music,” as the citation reads on a plaque adjacent to the South Mountain stage. Frank Cunningham, the versatile recording engineer with whom I’ve worked both in live transmissions from WGBH and several record albums, recorded this performance. He replied to my question afterward that he understood that plans are in the works to engage an acoustical consultant to recommend retrofits to St. James Hall.

Eric Hoeprich’s basset clarinet sung with exquisite clarity and depth in the Clarinet Quintet, K. 581. All through the piece, his perfectly calibrated, whizzing arpeggios and fluttering thirds resonated like mellow love-calls through the ensemble. Just a certain amount of reediness gave a gentle edge to a voice more like a recorder or baroque flute than a modern clarinet.   Hoeprich projected a marvelous, seemingly magical consistency across the clarinet range, from the very lowest to very highest. So much for whatever improvements accrue to “modern” instruments.

You can get a lively sense of Hoeprich’s virtuosity from his lovely performance of Mozart’s Clarinet Concert in A-Major, K. 622

Listening to him live, in the company of Daniel Stepner and his colleagues, however, was even more gratifying. Hoeprich’s dynamic nuances, ineffable melding with the four strings, and subtle phrasing were thrilling to behold. His sense of line yielded revelatory insights into Mozart’s questing spirit – daring to speak, as it were, from the heart – that manifested toward the end of his short life.