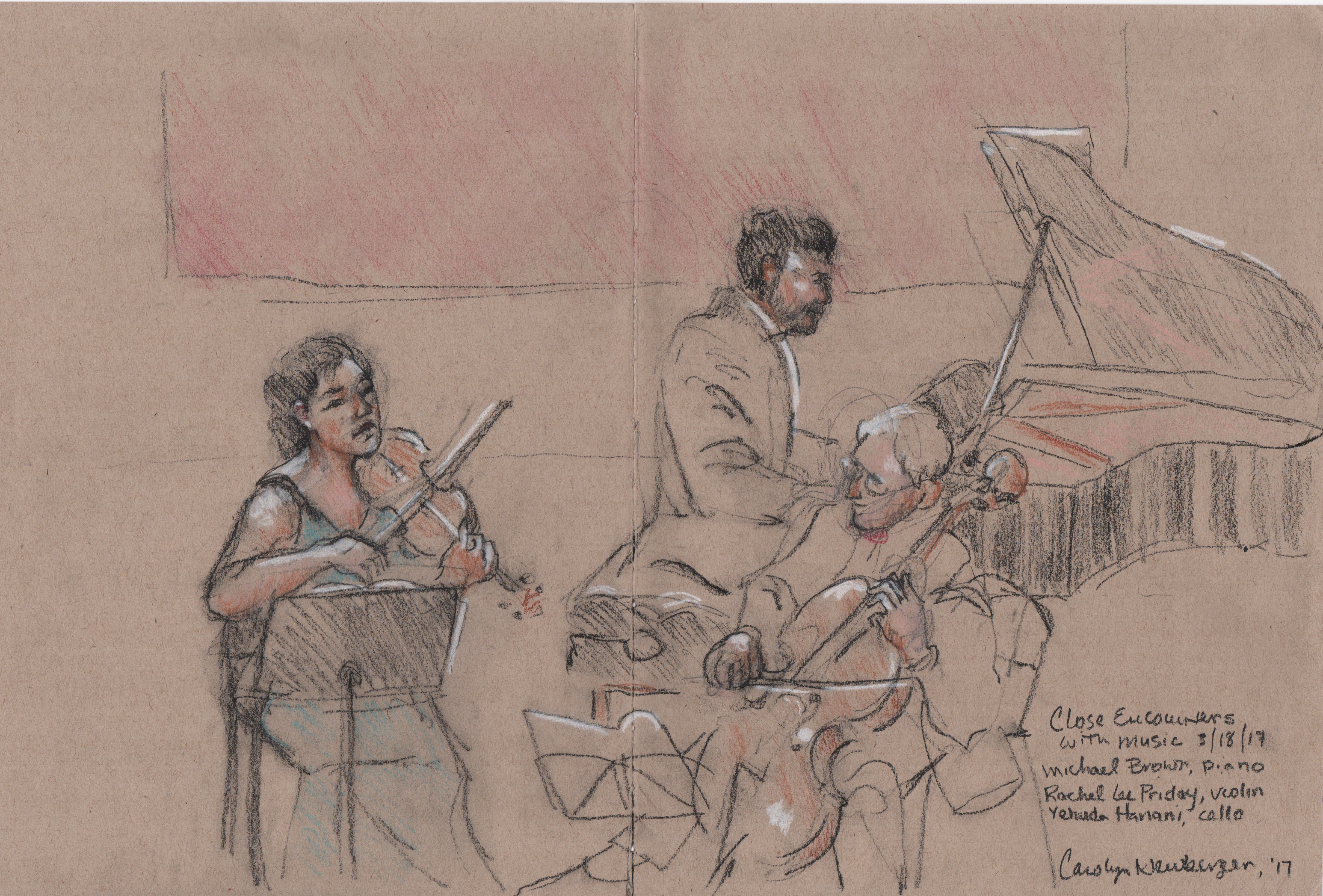 A large audience in Great Barrington’s Mahaiwe Theater braved the snow and cold for a warm, heartfelt, and satisfying chamber concert on March 18. Entitled “Beethoven Journey: Early Middle and Late,” it featured a provocative introductory lecture by Artistic Director and distinguished cellist, Yehuda Hanani, in which he spoke to the need to acknowledge the personal contexts of great musical works. (Beethoven’s love of the forest and his frequent walks to enjoy both the natural beauty and its aural landscape were tragically counterpoised with his progressive loss of hearing, even as these works were composed.) The program comprised his 1796 Sonata No. 2, Opus 5, in G minor for piano and cello; the 1801-02 Sonata No. 7, Opus 30, No.2, in C minor for Piano and Violin; and the 1811 “Archduke” Piano Trio, Opus 92, in B-flat major.

The young virtuoso pianist, Michael Brown, took Beethoven’s role at the piano in all three works, engaging more and more deeply as the evening proceeded, the house warmed up, and the musicians sorted out the intimate communications which these challenge works require. His astounding color palette and technical wizardry were in full display all through, and one could imagine the master himself approaching this level of sublime artistry at the piano.

Hanani himself proceeded immediately to the cello after his informative introductory lecture. A passionate and superb Beethoven interpreter, he plunged into the opening G minor solo note with tremendous aplomb. The chosen tempo was slow and contemplative.

Brown’s eloquent, muted reply signaled an exciting conversation to follow. And indeed it did. Hanani’s intense emotional engagement with the music, however, created a series of unforeseen and unpredictable auditory interruptions. When he extended his right leg after a thrilling phrase, or emphasized the dancing 6/8 2nd movement rhythms, he scraped his leather soles and bounced his heels against the stage. From the first balcony, the noise of these collisions was damaging. It took effort to tune it out. (Someone must have said something, because when Hanani returned for his marvelous contribution to the Archduke trio, there wasn’t a single artifact.)

Note the exquisite collaboration between cellist Mstislav Rostropovich and pianist Sviatoslav Richter, two of the greatest musicians of the 20th century, on the splendid video below. You can see and hear why they are so revered. The blinding rapidity of the rondo movement is unlike any chamber music your reviewer has experienced, a stage set of exaltingly masculine musicality, a magnificent duel on the precipice of risk. (On the day of this writing, had he lived, Rostropovich would have been 90.)

The brilliant young Korean-American violinist, Rachel Lee Priday, whose solo career with major orchestras now spans the globe, is also a noted chamber artist, whose life includes studying violin at New England Conservatory, English at Harvard College, and a stint as a journalist, at the Paris Review, and with Charlie Rose. Subsequently, she went to work at the New Yorker, as a fact checker. At first, she didn’t let her colleagues know that she’d been profiled in that very magazine years before, but ultimately she became known as “the violinist” after she was outed by an admiring or envious colleague. In a philosophical interview with Kore Asian Media about growing up as a young prodigy, she spoke of her time at the New Yorker:

“And it is who I am,” Priday said, matter-of-factly. Working at the New Yorker had required more of her time than her prior jobs, or Harvard, for that matter. After a year, she decided to return full-time to music. To her, journalism had been a second career, she said. By then, she’ d been playing professionally as a soloist for more than a decade. . .

“I remember when I was 8 years old, and I was playing a Beethoven violin concerto,” she said. “I just played the first line over and over until I felt like the phrasing was completely right, and I felt like I was in the right mood. For me, starting with the right mood and getting completely immersed in the music is always the way that I really find the voice and find the music.”

Lee Priday performed her sonata with Brown with splendid confidence and depth of emotion, emphasizing the power of the C minor repeated figures and their sweet complements in the relative major. She and pianist Brown made eye contact repeatedly, and their ineffable communication yielded strikingly coordinated dynamics and, in the second movement, exquisitely stunning pauses between forceful exhortations, romantic phrases, and blazing C major scales. Beethoven’s dazzling human insight and sense of humor radiated through cascades of questions-and-answers, quick shifts from major to minor, and deliciously offset accents. In Brown’s capable hands the piano produced a whole symphony of strength and color.

The fourth movement was a revelation of Beethoven the conjurer at the height of his powers, the marvelously slow beginning giving way to a steaming allegro with multiple rhythmic and harmonic punctuations: gorgeous rests following crashing szforzandos, a C minor development building and building inexorably to a G7 cadence. When its central repeat began, one could not but smile in anticipation of listening to the long passage yet again. In the end these astounding young players, whose exchanges gathered height and tremendous intensity, constructed yet another musical edifice, topped off by a wild presto with echoes of passionate gypsy dance.

The monumental “Archduke” piano trio took pride of place after the intermission. It’s a lengthy and engaging work and surely deserves such special prominence on a Beethoven chamber program. And this evening’s performance projected its magic with brilliance, subtlety, and total immersion in in its glories.

“Thayer’s Life of Beethoven, the classic Beethoven biography, quotes the testimony of the composer Louis Spohr, who it says attended a rehearsal of the piece at Beethoven’s home. ‘It was not a treat, for, in the first place, the piano was badly out of tune, which Beethoven minded little, since he did not hear it; and secondly, on account of his deafness there was scarcely anything left of the virtuosity of the artist which had formerly been so greatly admired. In forte passages the poor deaf man pounded on the keys till the strings jangled, and in piano he played so softly that whole groups of tones were omitted, so that the music was unintelligible unless one could look into the pianoforte part.’” (p. 64.)

The “poor deaf man” indeed! That cruel fate could force such a musical masterpiece from the pen of a composer who would never hear it requires us to ponder the depth of Beethoven’s personal tragedy. And to the gift he left all of us, especially in nights like this.

Brown, Lee Priday, and Hanani gave an “Archduke” performance for the ages. Right from the start, Brown’s splendidly modulated expression of the piano entrance gave way to exciting, perfectly calibrated rhythmic decorations by the ensemble, with unpredictable accentuations on the second beats of the 4/4 meter. One could imagine Beethoven himself leading his little band forward in what seemed like a piano concerto with a miniature string orchestra. The optimistic, B-flat major tonality summoned a sense of sunrise, with a grand piano occupying the center of a spring landscape.

But in the quiet passages that followed, a gorgeous expressivity emerged from each instrument, blending perfectly and flowing seamlessly. Virtuosic, perfectly articulated trills, affectingly emphasized appoggiaturas, and subtly breathing dynamics brought forth a sense of awesome beauty, an overwhelming match of compositional mastery and inspiring musicianship. The movement was supremely satisfying.

A 3/4 dancing second movement built to a stirring finale, giving way to another piano-centric, prayerful start to the Andante cantabile slower third movement, in which elegant, repeated rhythms rose up and subsided with impressively varying degrees of intensity. The trio’s collaborative spirit shone through the thematic variations over a scalloping harmonic structure that followed, with Hanani’s sonorous cello weaving a textured cushion around Lee Priday’s gloriously singing violin, and a Brown’s deft, perfectly-voiced realizing of bass contrapuntal lines, delightful rhythmical pulses and patterns, and dazzling right-over-left-hand and reversing crossovers.

The final, Allegro moderato movement brought the concert to a close with a faster tempo, playful, unpredictable accents and a sense of gaiety and joyous exploration. Again, a prominent, juicy piano part led the show with up and down runs pulling the violin and cello to magnetic unisons that broke into wonderful waltzes and marches on the way to a romping succession of arching arpeggios in the finale.

Bravo to Yehuda Hanani for pulling this concert together and rehearsing these young stars to a fare-thee-well.

Here is Hanani’s teacher, Pablo Casals, in an equally spellbinding performance of the “Archduke” trio with Alfred Cortot, piano, and Jacques Thibaud, violin, recorded in 1928, in London.

Note as well Hanani’s insightful interview in which he reflects on studying with the maestro at the age of 90, when Hanani was 20, “a life-changing experience for me, to which I would not want to subject my students,” which in turn led him to a pedagogy that focuses on his students’ finding their own voices. This includes, inevitably, listening to them, both as developing individuals and as musicians. There’s also an imbedded clip of Casals teaching a master class at U.C. Berkeley in 1960. Draw your own conclusions, but your reviewer’s money is on Yehuda Hanani.