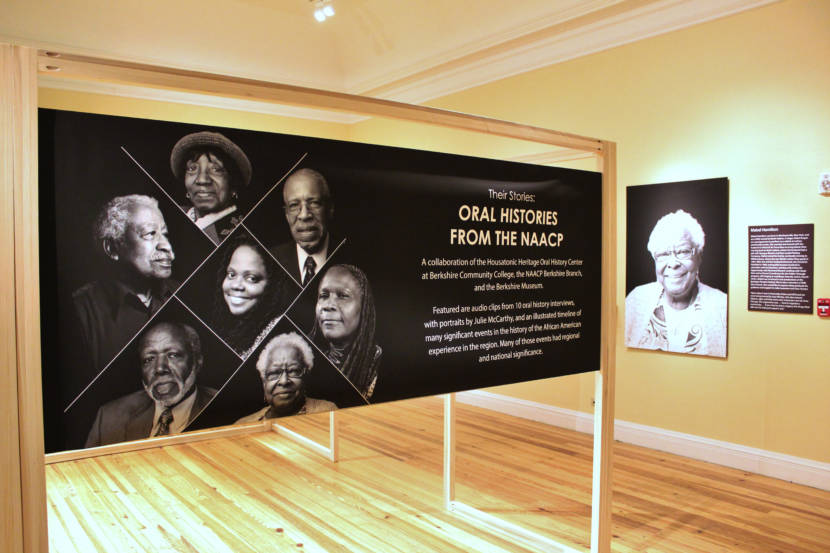 Pittsfield — Wray Gunn grew up in what he calls a “heavily segregated” neighborhood in Henderson, North Carolina. His family, which consisted of three boys, lived next door to a white family, also with three boys. On Saturdays, it was not uncommon for the six friends to meet at the movies. Despite separate entrances—Gunn and his brothers used the rear entrance while their neighbors used the front door—the boys created a common ground of sorts in the balcony of the theater where, if each trio of brothers sat at the partition, they could enjoy the movies together. This anecdote of Gunn’s is but one of many voices featured in “Their Stories: Oral Histories from the NAACP,” currently on display at the Berkshire Museum. The exhibit, a collaboration of the Housatonic Heritage Oral History Center at Berkshire Community College and the Berkshire chapter of the NAACP, documents the stories of individual African-Americans in the Berkshires.

“In my school …we were very few,” recalls Evelyn Pratt. “You could count them. The principal called one of the Black brothers in there and they were told, ‘Don’t ask any white girls out.’ They would not allow that at North High School … I was thinking, as they say, ‘stay in your lane.’” These anecdotal accounts of growing up in the Berkshires, and elsewhere, are balanced by events with more regional and national significance. For instance, in 1865, the year slavery ended in the United States with the passage of the 13th Amendment, Frederick Douglass lectured in Pittsfield. Interestingly enough, slavery was abolished in 1783 in Massachusetts—through a judicial interpretation of the state constitution—thanks to a crusade led by Elizabeth “Mumbet” Freeman. In 1868, the year the 14th Amendment to the Constitution was ratified—guaranteeing equal protection under the law to all citizens, including Blacks, to whom citizenship was granted—W. E. B. Du Bois was born in Great Barrington; he would later go on to become the first Black person to receive a doctorate from Harvard, and co-found the NAACP in 1909—the Berkshire County chapter was organized in Pittsfield in 1918.

Optimism and faith permeate many of the messages: “Always try to help: if you can help someone, as you pass along the way, then you can live in the world and not be in pain,” reflects Magdalene Adams in a paraphrase of one of Martin Luther King Jr.’s famous speeches. She adds, “You have to have patience to see wisdom and faith come alive.” Adams served as the president of the local chapter of the NAACP in Pittsfield when it was reactivated in 1983. The following year, Stephanie D. Wilson graduated from Taconic High School and went on to become a NASA astronaut; when she went into space in July 2006 as a crew member of the Space Shuttle Discovery, she requested that James Weldon Johnson’s “Lift Every Voice and Sing” be played as the wake-up call for astronauts. Portions of that song—along with the lyrics to 200 other popular songs, not to mention books and poetry—were composed while simultaneously working against discrimination in the early quarter of the 20th century.

“I feel like I’ve lived into being an African American woman,” says Gwendolyn VanSant. “In a way, I was avoiding it as a young scholar wanting to be acknowledged as smart and capable just because I am, not because I was the Black girl in the room. It’s very different trying to fit in rather than being honored for my intrinsic value as a human being.” This powerful sentiment is balanced by two women on the exhibit’s timeline: the first, May Edward Chinn, was born in Great Barrington in 1896; she went on to be one of the first Black women to become a medical doctor. The second, Margaret Hart of Williamstown, became the first Black graduate of the State Teachers College of North Adams in 1935; she went on to become the first Black teacher in Pittsfield.

The voices included belong to: Magdalene Adams, who visited Great Barrington during a field trip in 11th grade, eventually moved to Pittsfield in order to develop her career at General Electric and was responsible for activating the Berkshire chapter of the NAACP in 1983; Churchill Cotton, an employee of General Electric who came to Pittsfield in 1972, has served on the Pittsfield City Council and the school committee, and is a descendent of Frederick Douglass; Wray Gunn, whose family made their way north to Lee and then Stockbridge where his ancestor Agrippa Hull had lived before and after fighting in the American Revolution, is a leader in the Clinton Church Restoration; Mabel Hamilton, who moved to North Adams as a child, made her way to Pittsfield in 1968 where she quickly became involved in education and social justice; Dennis Powell, an army veteran who was born and raised in Pittsfield, is serving his third term as NAACP chapter president in addition to maintaining an active role in many social and racial justice and education projects; Rev. Charles Pratt, who came to Pittsfield in 1980 to become the pastor of Victory Temple Church of God in Christ, remains active in community and social justice work; Evelyn Pratt, who became active in music and church life at a young age, remains active in music at Victory Temple Church of God in Christ in addition to hosting a radio show with her husband; Shirley Ann Session-Edgerton, who came to Pittsfield when her husband was offered a pastoral position, has been instrumental in creating social and educational programs for area youth including service learning projects; Will Singleton, who was born in Pittsfield and was instrumental in restarting the NAACP in 2013; and Gwendolyn VanSant, who came to the Berkshires at age 15 to attend Simon’s Rock College, is the founder of Multicultural BRIDGE, a minority- and women-run nonprofit promoting equity, justice and trust.

This exhibition is a part of the Berkshire Museum’s ongoing “Objects and Their Stories” series, which presents the diverse cultural, scientific and historical narratives of objects from the museum’s collection. The exhibit runs through Sunday, May 5.