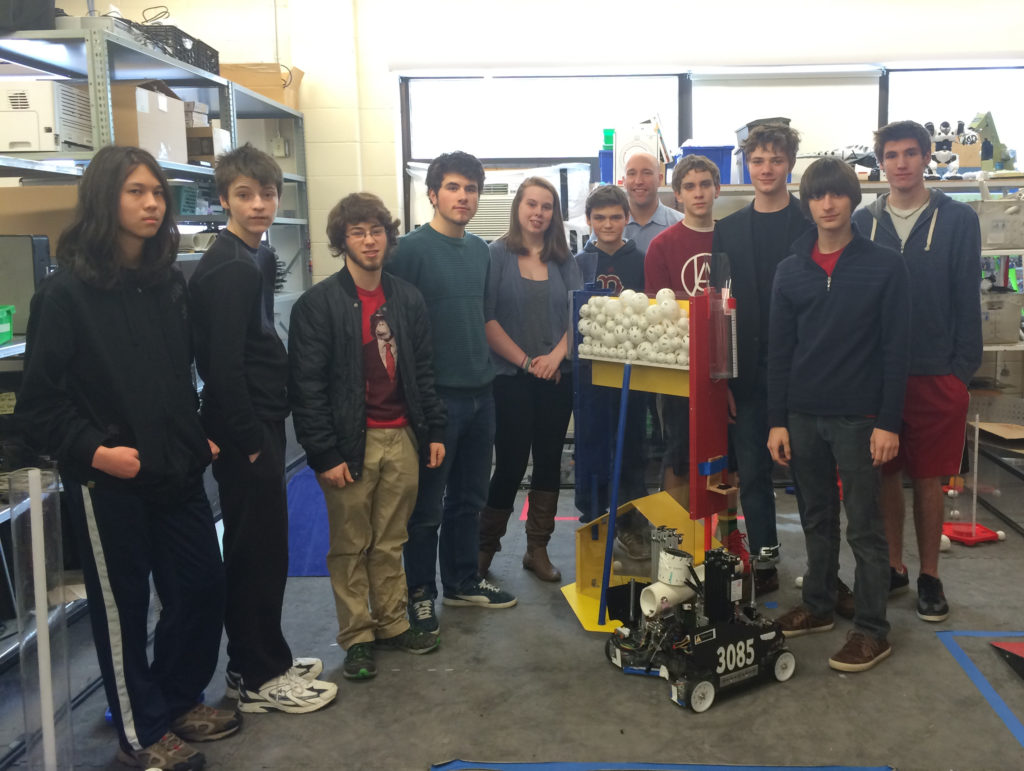 Sheffield — There is something endearing about a robot. Perhaps the delightful R2D2 from Star Wars has sunk into our consciousness; it is not hard to see why one could form an attachment to such a thing, especially if one has built and tinkered with it — sans instructions and under tight regulations — and nurtured it through robotics competitions.

It turns out there is world of robotics beyond what I had ever imagined. That was until last Tuesday, when I found myself in a STEM (Science, Technology, Engineering and Math) classroom at Mt. Everett Regional High School, surrounded by a group of passionate, bright-eyed teenagers, articulate beyond their years (not a “like” was uttered), who explained robotics and competitions to someone like…well, me.

“They get very attached to the robot,” said one robotics team member, of how a robot created by the Mt. Everett team for one year of competitions with specific tasks and criteria must eventually be disassembled or modified for next year’s new challenges.

Mt. Everett is the 2014-2015 FTC (FIRST Tech Challenge) state champion. The team has won three state championships in a row, and with alliance teams from Lenox and Lincoln, they are off to Scranton, Pa., for the East Super Regional on March 19 – 21, which will include 72 teams from Maine to Virginia.

Here is a video at the state competition of the team’s winning demonstration of Higgs Bots 3085:

“We won’t disassemble it until summer,” he added. And that will only happen after Team 3085, nicknamed “Higgs Bots,” demonstrates its robot’s moves. The team started building the robot last September, and began competing in November. The robot evolved over the first several competitions as the team made adjustments.

The base of a robot can be left intact with “tiny modifications,” said another team member, and used the following year, but “this team has redone a robot every single year.”

The competitions are hosted by FIRST, a New Hampshire-based nonprofit with the core mission, says their website, of inspiring young people “to be science and technology leaders,” and also to “foster well-rounded life capabilities including self-confidence, communication, and leadership.” 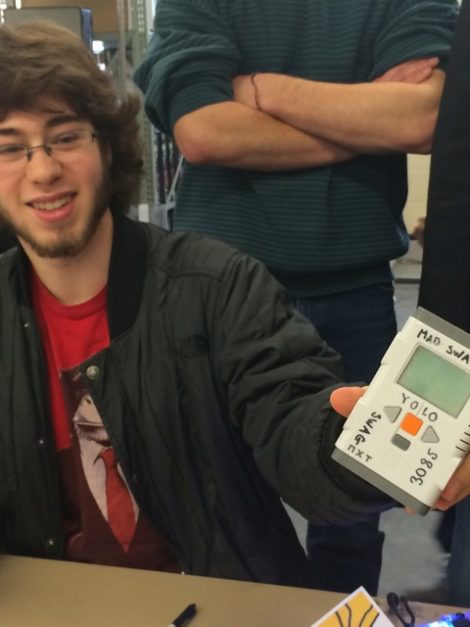 FIRST robotics competitions are known as a “Varsity Sport for the Mind,” and include rules, time, tasks, points, and resource limits for building the robots. The teams “are challenged to raise funds, design a team brand, hone teamwork skills, and build and program robots to perform prescribed tasks against a field of competitors…”

“It takes 880 lines of [programming] code,” said senior Max Lowenstein, lead programmer and competition coach, describing what goes into the robot’s little brain, a Lego Robotics NXT Brick that rides “on board.” The brick is first attached to a laptop, where it gets programmed before it is slid into the robot’s infrastructure.

The code is created for the specific tasks, Lowenstein added. In this case that includes picking up balls and depositing them in upright tubes to score points, which means the robot needs to extend an arm way up high, “a big issue this year,” said senior and head engineer Ben Webb.

Team co-captain and main driver, senior Kosta Casivant, got the controls and the team demonstrated the robot’s prowess in the arena, its size and course specified by competition rules for matches that last two-and-a-half minutes. The size of the robot is specified, too; it must fit inside an 18 x 18 inch wooden cube. Every year the team must build the robot and write new code for new actions, after the new “game” is released to teams in September, Webb said. Last year, he added, the team had to figure out how to “lift the robot up on a bar.” 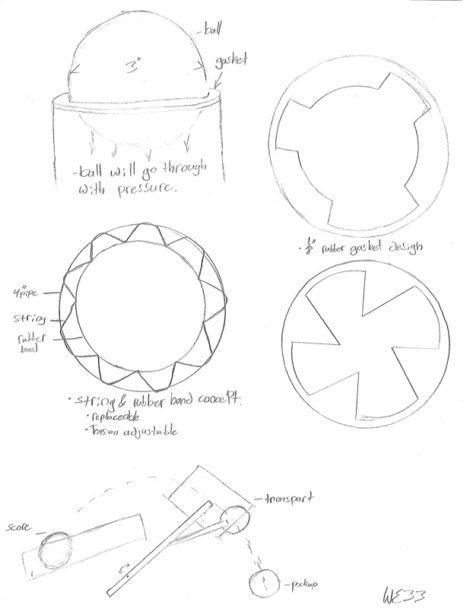 A sketch from the engineering notebook for the Higgs Bots 3085 robot.

There are no instructions.

For that reason, Mt. Everett’s Technology Coordinator, Chris Thompson, who oversees the group and monitors independent studies, calls it “the ultimate in project-based learning…the kids have to think creatively as well as technically, and then communicate their ideas and work in a group environment. These are all top level 21st century skills.  They have to build, wire, and program all while facing a competition deadline.”  The 10 team members meet every Friday after school.

How do they figure it out? Lowenstein, for instance, said he learned programming from the person before him. Aside from their volunteer mentors, students can also take online classes in the room’s computers, like a Python programming language class through Virtual High School (VHS). “Programming education has really opened up,” said a team member. That, he said, has led to an “explosion of interest in the robotics team.”

The team also won awards this year: the Rockwell Collins Innovate Award for best overall robot design; and runner-up for the Inspire Award, which is the highest FTC award granted, and judged across all categories. It is given to the best overall robotic program in the state.

I asked if everyone present was inclined towards the sciences. A lot of heads nodded, but some started shaking. “It’s not so much a requisite for being interested,” said one young man.

Then I expressed some awe at this approach to learning programming plus the engineering, and all of it sorted out by “trial and error,” as one student said. And, I thought, also accomplished through desire and passion.

“The basics are extremely intuitive, but you can add more nuanced things,” said robot programmer, senior Alex Dunn, who said he’d been programming “for as long as I can remember.”

“It’s an organic process,” said another student, of what is a collaborative creation in which the whole team contributes to some aspect. Some do fund-raising for the team, others, social media and web design for the team’s site.

Paul O’Brian, who taught STEM for 34 years and is now retired, serves as mentor to the team and oversees the group with Thompson. O’Brian has been with the seniors in this group for four years, and said their robot reflects their dedication to details, and “sets them apart from other teams.” 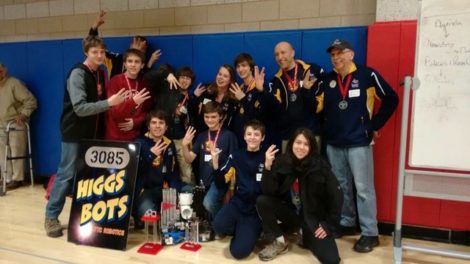 He said the team’s “can do attitude” makes them winners. “They believe they can and will succeed in every competition…the mentors of the program believe in this group of young people, we believe they can do anything they set their minds to, and they come through every time.”

Ben Webb said teams at competitions “get paired at random” and an “alliance” is formed, sometimes with people they’ve competed against. As a result, he said, a good part of the whole undertaking, including the competitions, requires “communication and collaboration.”

“This year could be our year,” someone said as the robot raised its extension mechanism. They hope to be one of the top 25 teams to make it to the April FTC World Championship in St. Louis, Mo.

“Today it happens to be the robotics competition,” O’Brian observed. “Tomorrow it’s the model UN, the soccer program, the band performance, the play. Their attitude transcends everything they do; they are fun to be around.”