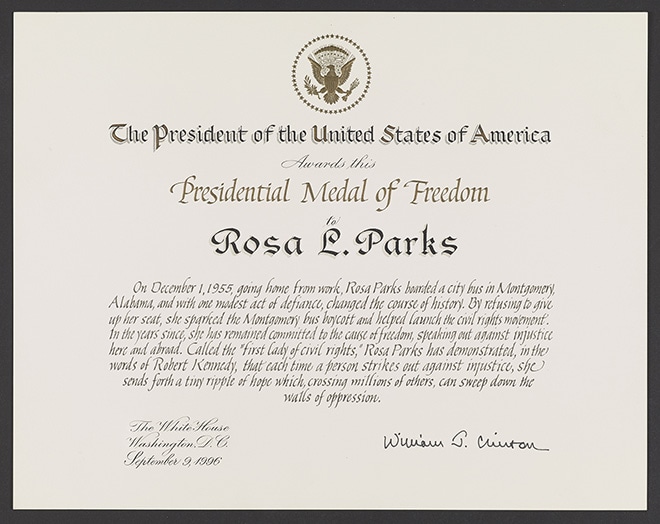 In contrast to the person to whom the award was given out last night, a representation of the Medal of Freedom awarded to civil rights activist Rosa Parks by President Bill Clinton. Image courtesy Library of Congress

I woke up to discover Rush Limbaugh — a man who’s always made sure his woman-hating and race-baiting are caught on live mics and shared nationally — is a national hero, the president hates half the country so much he can’t even shake her hand, and only 72 percent of Iowa precincts were reporting their results 36 hours on.

I was hoping to work on two different, fun, hopeful writing projects this morning, but I’m afraid if I don’t attempt to express this anguish, it will eat me from the inside out. This is the one and only life I’m allotted. I can’t afford to wallow in anguish. I have three beautiful kids to raise (they’re only allotted one childhood), a good marriage that requires attention, and so much work to do. I can’t get to those things now, so I’m sitting down in my pajamas before the rest of my day can begin in the hopes of coming out with a clearer head and a warmer heart.

That Donald Trump has reigned for this long in my country, with this much support among my fellow citizens and could very well reign for another four years, is a fact I don’t think I will ever understand. (And I’ve tried.) It will never not be a cold shock to hear his brand uttered in conjunction with the norms and traditions established and followed by such decent, self-giving, honorable men as Abraham Lincoln, Theodore Roosevelt, Harry S. Truman and John F. Kennedy.

That the haughty neck of Rush Limbaugh has now been honored with the same medal that once rested on the likes of Rosa Parks and Mother Teresa is too awful to contemplate. Yet I have to, because I just saw a picture of Melania Trump doing it. With one f-you gesture, Trump has simultaneously elevated the very worst of humanity and denigrated the very best.

I know that someday soon this alternate universe of good is bad and bad is good will reverse itself again. (It will, won’t it?) And with the benefit of time and distance, what ailment we all once suffered from will psychiatrists diagnose a decade from now as “Trump syndrome”? (What can I do now to minimize its harms?)

I got up from bed. I ran to the back door, then the front door, then to each window, to make sure they were all locked. I had a vision as I bolted and rebolted all the entrances to my house of an army of loyal Trump soldiers marching south on Route 41 with a list of addresses of traitors and unbelievers to round up.

As I write that description, I can hear mocking laughter behind my ear — and can hear the mocking comments, too — from a posse of faceless, nameless men.

“Too bad we couldn’t make that happen, lady. Maybe next time.”

I imagine these men’s reactions on that same night might have been to shake their heads incredulously in the dark, rub their hands together and whisper something like, “Holy shit. We did it. My precious.”

I know that’s ridiculous. I know the winners of Nov. 9, 2016, were far more likely to be wearing suits and toasting each other with glasses of Dom Perignon and cries of “Holy shit, we did it!” in brightly-lit Park Avenue ballrooms.

I also know my visions contain their own privilege and obliviousness. I’m not a Rust State breadwinner who can’t support my family because the good manufacturing job that had brought my own parents into the middle class has gone and is never coming back. I have lost no family member to a death of despair. I have no feelings of alienation that FOX News acknowledges and assuages. The status quo worked fine for me. I hold three higher education degrees; I once had the luxury of traveling the world; and now I have the luxury of sitting in my pajamas on the couch for the morning, writing about my feelings.

I feel strongly that the liberal inclination to mock the ignorance of Trump supporters is no better than the Trump-y inclination to mock liberals for their heartfelt concerns about the state of the nation, yet I can’t deny the appeal of mocking that apparently bottomless ignorance, as much as it implicates us. There’s so little to laugh at these days, and here’s yet another new “The Daily Show” dispatch from yet another Trump rally. Wow. That lady can’t put together a sensible thought. What a dumbass! It’s fun to watch how Jordan Klepper effortlessly forces the guy in the MAGA hat to contradict himself. It reminds me that reason did once prevail and might again. But these are fleeting satisfactions, and cheap laughs, and seem only to help bring about more fully the bleak, broken world that MAGA envisions.

My husband tells me, “Will you please just stay away from Facebook today?”

But below the photo of Rush Limbaugh with his unearned medal is one of my dear friend Linda skiing with her boys in Colorado. In Montana, it’s Kristin’s daughter’s birthday. Kevin in Hawaii has a cool music video to share, Carolyn in North Carolina is taking a lovely hike, Rev. Liz Goodman has posted a sermon full of hope, my former student Leah is really coming into her own, and my cousin Rosie in Australia has just reunited with her globetrotting daughter.

Hope springs eternal, and connection is our only hope. 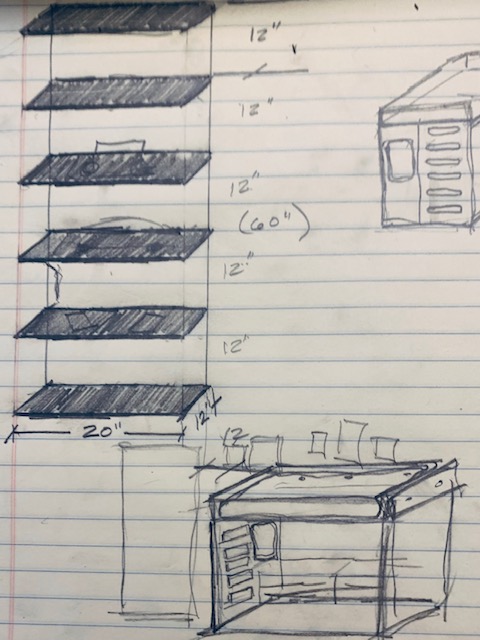 How do we hold all of us together? How do we move out of this purgatory that’s not a union, not working, not serving anyone? We’re the Divided States of America, and divided we fall. What, or who, can keep us from falling apart?

This morning at the breakfast table, having just put the news aside, I stared at the salt shaker. My 9-year-old son ran up and started pointing excitedly at drawings he’d made with his dad last night on a legal pad. “See, Mom? The desk is gonna go here, underneath the bunkbed. Maybe I’ll use the little wood chair in there. And Dad’s gonna build the steps right into the side, see? Like the steps you put into the side of a swimming pool, you know? And we’ll have a little window, too, see?”

He’s so hopeful, my son, making plans for his new room like there’s lots of good tomorrows yet to be. He needs me to join him. I pulled him in close and said, “Tell me again about your plans.”