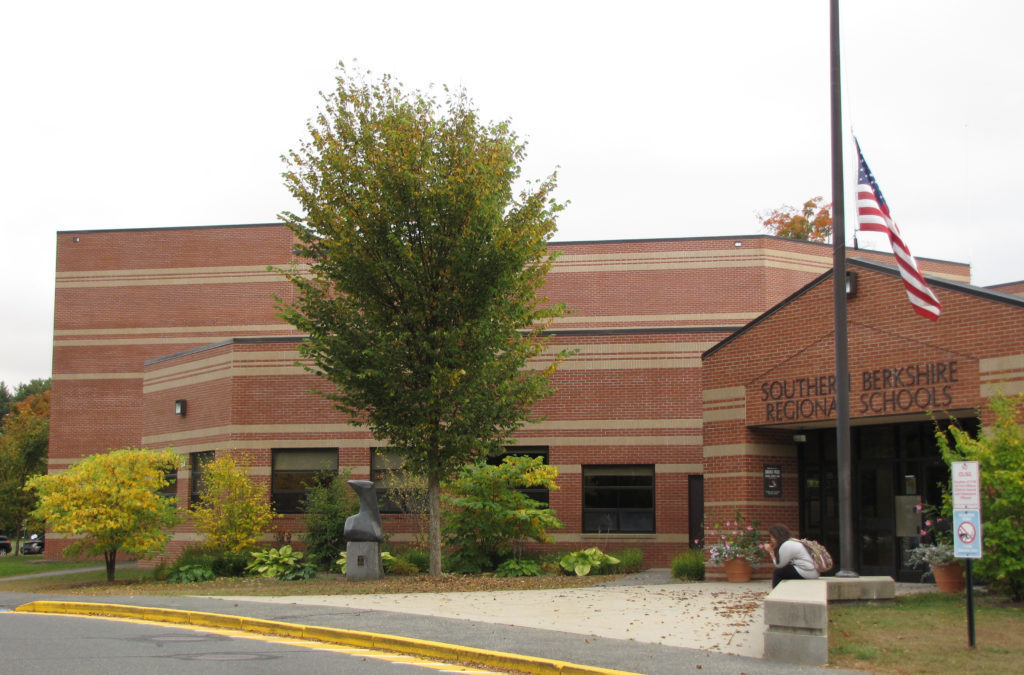 The entrance to Mount Everett Regional School in Sheffield.

Sheffield — There has been no shortage of opinion from adults on the recent goings-on at the Southern Berkshire Regional School District. But now the students are weighing in, and they’re not shy about expressing their opinions and adding their voices to a situation that is very much in flux.

The most recent edition of the Bold Eagle, the student newspaper for Mount Everett Regional School, ran a front-page news story and an editorial on the controversy surrounding two administrators and the school committee.

Both superintendent Beth Regulbuto and the school committee are the subjects of a lawsuit and whistleblower complaint from former dean of students Kurt DeGrenier, whom she had suspended and demoted. The suit seeks unspecified compensatory damages “in an amount to be proven at trial, plus triple damages, attorneys’ fees, interest and costs.”

DeGrenier also alleges breach of contract after he drafted a complaint that his son Hunter, a student in the district, was not receiving the services he was entitled to. Click here to read the full text of the lawsuit.

A second complaint from special education case worker Brenda Olivieri alleging workplace retaliation and poor management has been lodged against Regulbuto and student services director Sandra L. Hubbard. Olivieri made her complaint in an email to the school committee but has not yet filed suit. In addition, multiple open meeting law violations have been filed against the school committee.

The October edition of the Bold Eagle has recently been posted on the paper’s web page. Click here to download it. In a story headlined “DeGrenier’s Dilemma,” senior Brooke Wells and sophomore Rochele Worth recounted media recent coverage of the controversies in both The Edge and the Berkshire Eagle.

“This issue started drawing parallels to the start of the 2018 school year, when students were disappointed to find DeGrenier missing,” the students wrote. “That prompted the distribution of ‘Where’s Kurt’ bracelets.” Though the article did not mention it, one parent, Vicky Russell, also wears an orange T-shirt announcing that she is an SBRSD “inmate.”

The story also noted community reaction such as the Save SBRSD Facebook group, which bills itself as “a forum for parents and members of the Mount Everett community.” Save SBRSD also has an Instagram account.

“Last year and again this year, these events raised alarms for students, faculty and staff alike,” the authors wrote.

The story also notes that DeGrenier was reassigned to the student support center, where students are sent who need to be counseled on their behavior. It quoted student Ethan Benoit as wondering why DeGrenier was moved there. The story then openly raised questions about the motives of those who reassigned DeGrenier.

“And most importantly, is this the most productive use of a popular and skilled administrator?” the authors asked, perhaps rhetorically. “Or conversely, is the student support center a parking lot to keep DeGrenier removed from administrative duties until he is finally forced out of the district?”

An unsigned editorial on the controversies, headlined “What’s Going On?”, raised more questions and made an implicit demand for an explanation from the administration. Also questioned was the timing of the treatment of DeGrenier and the unexpectedly early exit this year of longtime Mount Everett principal Glenn Devoti who, like DeGrenier, was widely admired by the student body.

“So, why are these [two] beloved people within our community being forced out? Why has Mr. Devoti retired unexpectedly early? And why has Mr. DeGrenier been demoted, demoralized and dispirited by the school committee and the superintendent?

“We, the students of Mt. Everett do not understand the actions of the school board and the superintendent. We respectfully request an explanation as to why these popular and effective administrators have been targeted.” School committee Chair Jane Burke declined to comment on the Bold Eagle stories.

But parents who spoke on the condition of anonymity have told The Edge over the last few months they’re convinced that Devoti retired earlier than expected because of pressure from the administration.

Now in its 14th year, the Bold Eagle was revived by Mount Everett history teacher Jeff Lang, who noticed in his first year, 2005, that the school no longer had a student newspaper. Lang, the paper’s faculty adviser, did not return a message seeking comment.

Asked whether the school committee expected to discuss superintendent Beth Regulbuto’s contract at its next meeting Thursday, Nov. 14, Burke said on Thursday that the agenda has not yet been set. Some commenters on Save SBRSD have been openly calling for Regulbuto’s head. Regulbuto was hired in 2017 to replace the retiring David Hastings. She is in the third and final year of her current contract.

After the board went behind closed doors at its Oct. 24 meeting, Stewart, who played a role in negotiating Regulbuto’s employment contract when he was on the school committee, told reporters if the committee does not act on Regulbuto’s contract by Sunday, Dec. 1, then it is automatically renewed for one year.

Burke disputed that. In an email to The Edge, she cited Section 2, Paragraph 2 of Regulbuto’s contract from April 2017: “It is expressly understood by the Parties that this Agreement contains no rollover language. However, the Committee agrees to provide the Superintendent with notice on or before December 31, 2019 of its intent to enter into negotiations for a successor Agreement. Failure to provide such notice will not result in an extension of this Agreement.”

Asked to provide a full copy of her contract, Regulbuto said the district’s public records officer was expected back in the office on Monday and would respond to The Edge’s request at that time.

At a meeting last week of the executive evaluation subcommittee, which evaluates the superintendent, school committee member David Travis reportedly said the district was in an “existential crisis” and that those calling for the removal of the current administration should be careful what they wish for.

Travis, who confirmed his thoughts to The Edge in a text message, noted that both the Southern Berkshire and Berkshire Hills regional school districts have begun preliminary talks to explore a consolidation or merger and that officials representing the eight towns in the two districts are enthusiastic participants. Under those circumstances, Travis asked, who would want to become superintendent of Southern Berkshire?

Travis emphasized that he is “agnostic on consolidation.”

“I’d like to make sure that student outcomes are considered first and foremost,” Travis said.

The school committee next convenes at a special meeting called for Tuesday, Nov. 5, at 6 p.m. A closed-door session has been called to discuss Brown’s open meeting law violation complaint. The agenda says the board expects to vote on a response to the complaint after the executive session.