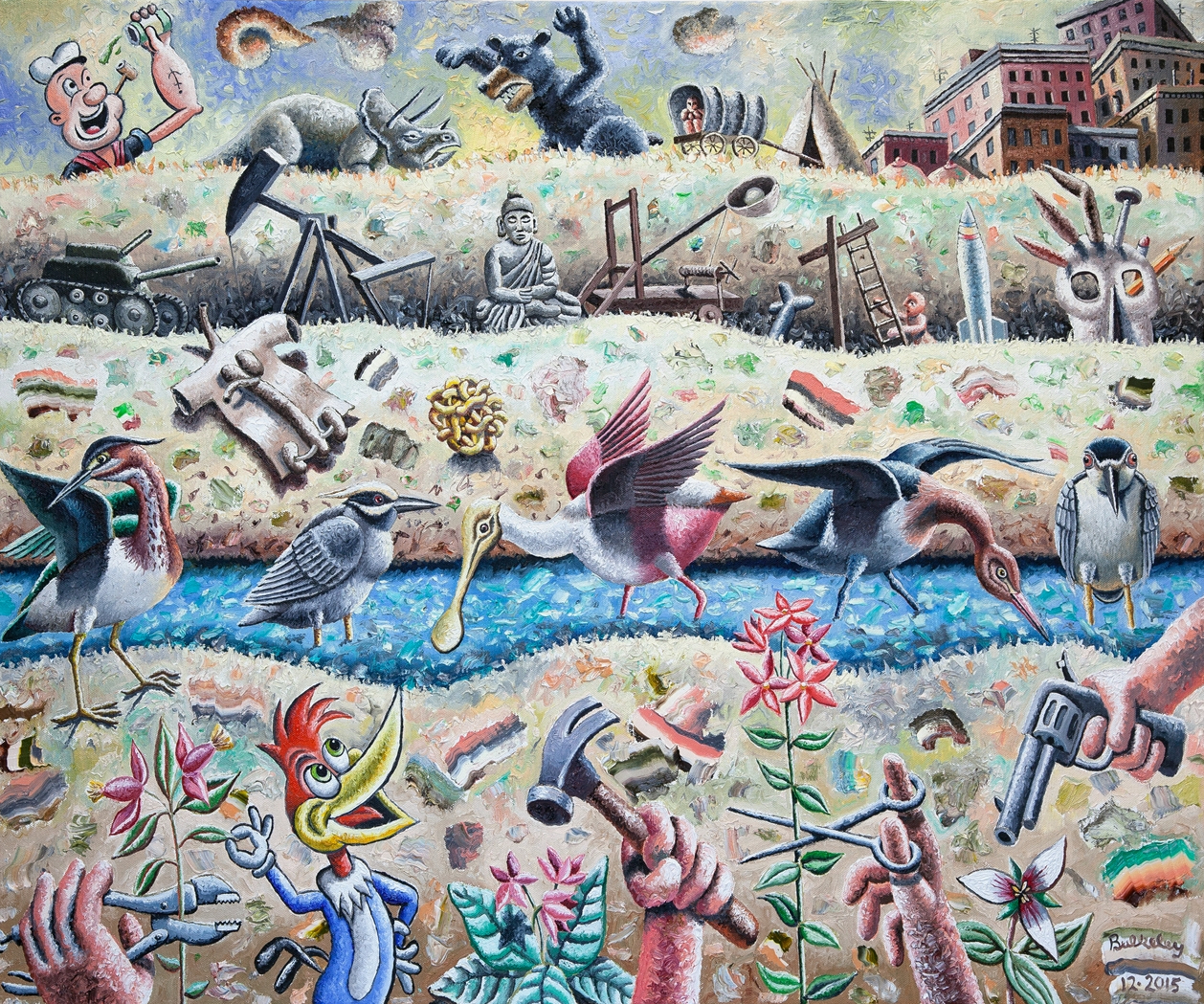 “I try to make paintings that are beautiful, frightening and funny all at once, similar to The Theater of the Absurd, which assumes things are so bad that you can only laugh.”

When you first enter the world of a Morgan Bulkeley painting, you feel as if you are submerged in a sublime, nightmarish labyrinth, where no one gets out alive and nature is continually under siege from the consumerism and violent human behavior found in the everyday.

Bulkeley, who lives in Mt. Washington and works from his studio in downtown Great Barrington, has a collection of his recent work – seven paintings and 13 gouaches — on exhibit at the Miller Yezerski Gallery, 450 Harrison Avenue in Boston until March 15.

One could easy believe the great Flemish painter, Hieronymus Bosch, known for his exquisite depictions of sin and human moral failings has decided to reincarnate himself into the 21th century, climb up Mount Washington in western Massachusetts, sneak under Bulkeley’s reclusive cabin door, kick off whatever monkey might be partying on the painter’s back and continually scream into his subconscious, “Paint this world as you see it. Paint this world as you feel it. No more excuses! Just do it. How long do you think you have?”

And this is precisely what Bulkeley does.

He paints with a passion as if his life were depending on it.

Even after a recent heart attack caused by a blocked artery, and the loss of his beloved sister, Bulkleley was soon back up and painting his unique world. And where Bosch painted skeletal armies and demonic fires, MB, as his friends like to call him, has inserted, tanks and drones, Marlboro cigarette packs and Band Aid boxes.

Bosch’s futuristic creatures plaguing the landscape have been replaced with swallows and owls, deer and badgers and a carnival of creatures, great and small, all of whom, it appears, are on the verge of extinction. Whereas Bosch’s imagination and dense use of symbolic figures relate to the superstitions of the 15th and 16th century, MB has plummeted us into the Now, giving the viewer no option but to go deeper into the horror.

Both artists portray a very unbalanced balance in nature. Dynamic worlds crammed with desperation. But like any great artist, ultimately MB’s work stands alone. His use of color is saturated in painterly light. No detail goes amiss, no animal left out from entering his ark.

It is clear he knows and studies his subject matter with the precision of a clock maker repairing clocks albeit surrounded by a barbed wire fence with a perverted Mickey Mouse yielding a shotgun.

How can we not help but call this painter a visionary, especially when you delve into Bird Loss Heart Attack, his new book published to accompany this collection of paintings. The book, available at the Bookloft in Great Barrington, contains 52 gouache paintings, each facing a poem or prose passage by authors ranging from Shakespeare to Elizabeth Kolbert, all summoning the wonder and beauty of the natural world that, as depicted in the paintings, is fast being laid waste.

“I’ve always thought of myself as a storyteller,” MB writes in the introduction to his book, “offering warnings and suggestions on how to live our lives.”

You only have to glance at the national headlines or read the warning signs posted up and down our poisoned Housatonic River, to know Eden has become bulldozed and replaced with toxic PCB riverbanks. And something radical has to change if we are going to leave anything like a loveable earth for future generations.

Artists depict the reality far better than any politician. If the world MB paints doesn’t fit over the proverbial couch, perhaps it is time to burn the couch and step outside, pick up some trash and stop buying products made by the machine that does not care about contaminated PCBs filtering into the natural food chain. The fact that here in Berkshire County great lengths are taken to promote organic and enlightened living while at the same time we can’t even swim or eat anything in our river is a mirror of his painterly world. As MB writes in his book, “Animals die from our sprays and pesticides, and ingest lead shot, bottle caps, and plastics we throw out of our cars windows.” We are all responsible and the only finger pointing should be within our super selfishly enlightened yoga stretched selves. Period.

The viewer might not like birds trapped in steel or skewered hearts being pecked at by blind birds, but at least he is doing something positive by recording our flaws and the harsh reality of how quickly this environment is changing.

I tracked MB down in the Fuel Coffee Shop and asked him a few questions about his background in the hope of gaining a little bit more insight into his unique picture making process.

JKL: It is a pleasure to be your neighbor in the Old Sears Building in Great Barrington, at the corner of Railroad and Main. Your daily work practice and dedication to your art is an inspiration. Your paintings are seen as reflections on Eden gone awry, some say marrying the painters Audubon with Philip Guston. Can you tell The Edge a little more about your paintings?

MB:  My paintings reflect, I hope, the complexity of our modern world; we still have the framework of nature, it’s incredible beauty, struggling with our desire for speed, entertainment, immediate gratification and disposable “things” with consequent garbage, all wrestling for our attention and souls. I see in nature and in the best of humanity an incredible beauty; but I also see in our technology and aggression a will and ability to destroy that beauty, either actively or inadvertently. The refuse of our consumerism, wafting down our streets, caught in the twigs of trees in our deepest forests or swirling in giant gyres in the ocean, is a steady reminder of our growing and smothering effect on our only habitable planet. I paint to try to make people think of the fragility in which we exist.”

JKL: The conflict between man and nature is often extreme. Guns, tanks and burning buildings are perfectly juxtaposed with animals and birds. I know you spent some time in the 1960’s in Newark during the riots there. It seems that time has had a profound effect on you. Can you talk a little about this painful time in our countries history?

MB: After college I accompanied my wife to be to Newark, N.J., where she worked with VISTA, running a tutoring program, a coffeehouse, and did community organizing. It was in the period of the Newark riots, which saw tanks and phalanxes of National Guard marching down the streets, as well as gunfire and fires popping up around the city. A terrible moment for America.

JKL: There is something mystical about living in the same house you were born in. I know your parents were a great influence on your work and childhood memories fill your landscapes. Can you talk a little about your Mount Washington home and growing up in the Berkshires?

MB:  I grew up on Mt. Washington with my mother, a fine botanist and gardener; my father, a poet, writer, naturalist and farmer; and my sister, a wonderful pianist. People often brought us baby animals, orphaned or injured, to raise. We had, among our zoo, a fox, a deer, owls, hawks, squirrels and flying squirrels, a raccoon, a crow, woodchucks and an opossum. Their beauty and wildness sank into me.

JKL: Is there a funny moment you would like to share with us in the Bulkeley household?

MB: When a friend said quietly, during lunch with my family, there’s a hawk. The friend was stunned by how fast the table was abandoned for binoculars, everyone rushing outdoors.

JKL: I have been enjoying your new beautifully illustrated book, Bird Loss Heart Attack, containing your illustrations to a wide selection of poems written about birds. What was the impetus behind this book?

MB: The book, Bird Loss Heart Attack, is meant to draw attention to the fact of dwindling birds. Those who think of pigeons, English sparrows and starlings as “birds” have nothing to worry about, as they thrive on humans’ habits. But of the 20 most populous species that are in decline, the Audubon Society says that they are down by 68 percent since the 1960s. I am not aiming at what Fuertes was after [Louis Agassiz Fuertes, 1874 -1927], perching birds in gorgeous landscapes. I am setting birds in turmoil and danger, the way I feel it, in irrational, clamorous, chaotic human-scapes.

JLK: Do you have any words for younger artists trying to make their own way in the art world?

MB: The last time my mother was able to walk into my studio, she stared at my new paintings for a long time. Finally she said, “That’s beautiful!” Then there was a long pause, before she continued, “Do you feel all right?” That’s quite how I hope people see my work.
JLK: Given the current political climate of extremes do you have any concerns or fears about our country’s future and what do you think of Donald Trump?

MB: I am flabbergasted to see how so many of our neighbors are slapping a person like Donald Trump on the back: “Carpet bomb’em” is hardly a plan when Syria is already reeling in chaos; “Get rid of regulations” is a revolting suggestion when people in Flint, Michigan can’t drink their water, and when here in the Berkshires our beautiful Housatonic is poisoned by GE dumping their PCBs into that pristine water.

And that was that.

MB had to go back to work.

Back to his studio and solitary daily practice of drawing and painting and sculpting a jumbled up vanishing world.

Morgan Bulkeley’s work is currently on exhibition at the Miller Yezerski Gallery, 450 Harrison Ave., in Boston until March 15, 2016. For more information visit https://www.milleryezerskigallery.com.