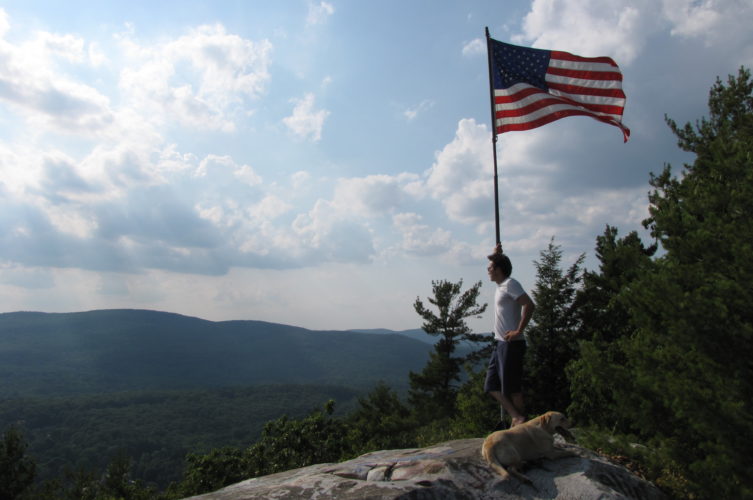 Housatonic — It is a historical and literary landmark that is home to wildlife and dizzying vistas of the Housatonic Valley and beyond. Now more of Monument Mountain – which receives 20,000 visitors a year — will be protected and accessible to the public, thanks to two local landowners, The Trustees of Reservations, the Massachusetts Department of Fish & Game, and the local community.

In what is a boon to southern Berkshire communities, its landscape and wildlife habitats, The Trustees, who already own and manage the existing 503-acres of the mountain, partnered with Fish & Game in June to purchase 45-acres of private land that provides access to, and includes, the Flag Rock overlook on the southwest slope of the mountain, and 280-acres that includes Monument’s highest elevation.

Trustees Conservation Specialist David Outman works with landowners who want to conserve or protect a piece of property. He said that by partnering with Fish & Game, “the state now has an interest, and they’re a great partner.”

While The Trustees own and care for a large portion of the mountain, said Outman, land ownership is fragmented, and private land is often crossed by hikers. “We want to buy land to open it to the public, make it a safe and welcoming place,” he added.

Private parcels on Monument have been donated or sold to The Trustees over the years. The original gift was 260-acres from Helen C. Butler in 1899.

Ethan Culleton, a Great Barrington native who sold the 45-acre Housatonic parcel that runs up from the village to Flag Rock, said that in spirit Flag Rock – a quartzite ledge with soaring views of the Housatonic valley and the Taconic range beyond — has “always been in the public domain,” and sees the sale as part of his larger vision for a community gathering place along a river walk that will lead up into the mountain and ultimately benefit the village.

Referring to the Town of Great Barrington’s Master Plan, Town Planner Chris Rembold said that “Ethan’s vision and the Town’s vision are complementary.” Indeed, a goal for Housatonic in the Plan’s Open Space and Recreation Vision Map states: “Connect neighborhoods with the River, the mountains and open spaces.”

As part of the sale, Culleton, an open-space, sensitive-land-use advocate, said he stipulated that within three years The Trustees must connect a trail from Flag Rock to Housatonic, its collection of mill buildings no longer industrial husks as artists, dance studios, and other businesses move in. To have a river walk here would be a “game changer,” he said, noting that sometimes “open space is the industry. It promotes wellness, provides community, and lends itself to a happy, healthy society.”

Clover Swann of Stockbridge, whose family has deep land preservation roots in the area, said that her hope for the mountain is to build trails to connect the Swann Trust property summit with Flag Rock, an idea that also corresponds with the Town’s planning goals. “I’ve been thinking about how cool it would be for ambitious hikers to hike up from the Route 7 parking lot, go up the mountain and hang out on cliff, then head across the wide expanse of mountain to Flag Rock.”

The Swann Trust has sold land to The Trustees in the past, and still owns “a bunch” of the Mountain’s acres, said Swann, in addition to other undeveloped land in the area. The Trustees purchased these 280-acres (really 282-plus, said Swann) for $190,000 said Outman, who added that the price was lower than the Culleton land – purchased for $350,000 — because it was under a conservation restriction. Swann said she was under a “contractual obligation” to sell, and added that given the terrain of this land, development was unlikely, though the family had been allowed to log there. “But leave it to a mall to think up something,” she laughed.

Culleton still owns land along the river, including part of what once was the Barbieri Lumber Company on Park Street, which burned down in 2001. Culleton isn’t sure what he will do with that particular site, a long section of brick wall still standing amid weeds, but noted that putting it into conservation would restrict industry, and “we need the industry,” and that there has to be a “balance.” Part of his parcel is the parking lot between the mill buildings off Route 183, which, he said, could serve as a visibility point for The Trustees Flag Rock access point.

But access requires an infrastructure like parking, trails and kiosks, said The Trustees Regional Director Joanna Ballantine, and more money is still needed. “We’ve had wonderful public and private support,” she said, “but we still need to do $100,000 in fundraising to be able to steward the property and engage the community.”

Grove Street winds up to the base of the mountain, where it was said that a grove of red oaks once stood, noted Culleton. A charming cluster of homes amid a field with an old barn is a reminder of the past, when it was a mostly Polish neighborhood of mill workers. The chipper Sonny Tarnawa, a former mill worker who still lives on the street – near the former Polish American Club — said he had lived there for 79 years, and recalls the homesteading days, when everyone had animals, and “when we never went to stores for anything.”

The street connects with two trails that lead to Flag Rock. But the lead up is “very awkward,” said Culleton, of the somewhat hidden trail heads in residents’ backyards, and of the lack of parking.

Monument Mountain has an enviable history, given the star power of some who have loved it and clambered up its craggy walls. It was the subject of a poem by William Cullen Bryant, in which he tells the local legend of a Mohican girl who, heartbroken, hurled herself off one of its quartzite ledges. In 1850, Herman Melville and Nathaniel Hawthorne met for the first time on the mountain, developing a friendship that would help the author of Moby-Dick complete the book, which Melville dedicated to Hawthorne.

The mountain was so beloved that in 1899, Helen C. Butler of New York – who was related to the Swann family — purchased 260-acres of it, “to prevent vandals from disfiguring it with advertising signs,” according to the editor of Printer’s Ink out of Boston from that year, adding that Miss Butler “vows she will devote time and money to prevent these historic hills from being defaced.”

Not only did “Miss Butler” turn right around and hand the property over to The Trustees, said Printer’s Ink, but she also gave them $2,000 to care for it, nearly $58,000 today.

The Trustees own and manage 112 reservations in Massachusetts, and they rely on community support as well as large private gifts and state support, and will search “wherever they can,” said Outman, for the money needed to make improvements for these new purchases.