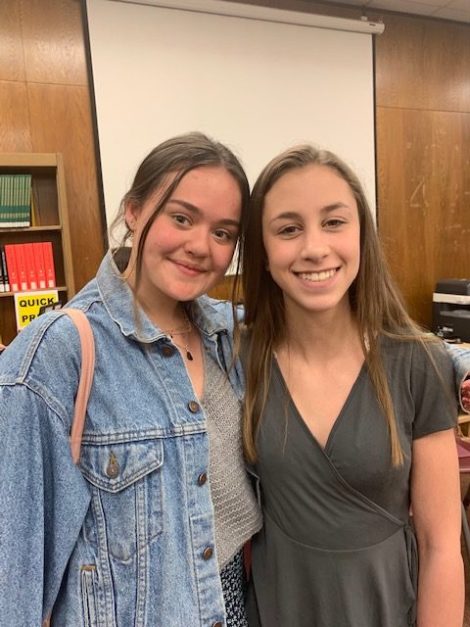 Great Barrington — By 7:45 a.m. Thursday, April 11th, the Dunkin’ Donuts were disappearing in the faculty lounge at Monument Mountain Regional High School, but it wasn’t a staff meeting that was convening. More than 30 community members, business owners and experts from a wide range of life paths and career fields, many of whom had graduated from Monument themselves, plus others who had never set foot in the building, had filled the room and were awaiting instructions. They’d been asked to spend the bulk of their morning sharing career advice, life lessons and words of wisdom with 149 ninth-grade students. 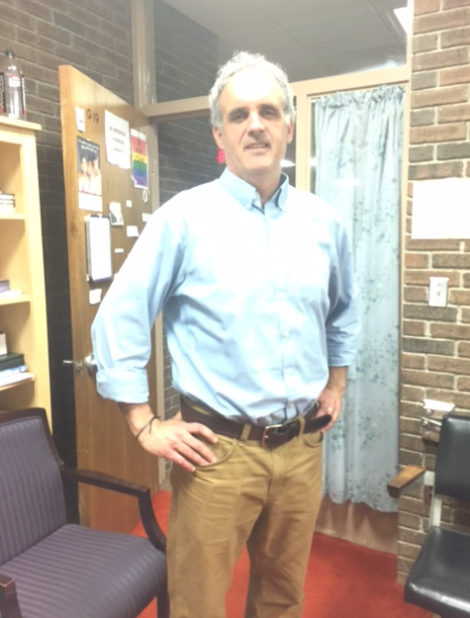 Sean Flynn, longtime guidance counselor at Monument and, this year, the Career/Vocational and Technical Education coordinator, had asked us (myself included, as a freelance journalist) to participate in the school’s first Career Day. The morning served as a kick-off to the district’s initiatives to deepen connections between the district and the community, and help even the school’s youngest students start to envision a future for themselves in the work world.

A fair bit of classroom instruction had been given over to priming the students for their visitors from the work world. “Kids were prepared to be engaged,” Flynn said, “because they’d engaged in activities in their classrooms to start thinking about what potential careers could look like, and had started building their own interest profiles.” An important goal, Flynn said, was for freshmen to be supported to embrace a bigger role and greater responsibility, and not consider themselves “glorified middle-school students.” Added Flynn, “We explained that they were representing themselves, their classmates and their school, and that there’s a responsibility in that. This is a privilege. We want to develop these opportunities, where they have more choices.”

The volunteers who’d gathered were an eclectic bunch who ranged from a millennial engineer to a director at Hilton Worldwide; and from the founder of local CSA Woven Roots Farm to the founder of Xenon Media, based in New York City, which creates TV commercials and online marketing campaigns.

Flynn stressed the value in students seeing Monument graduates “who have walked where they walk” now working in positions of authority and making a living. Brandon Messina, a recent graduate, now works for the West Stockbridge Police Department and attends the police academy. He sat next to Chief Walsh of Great Barrington, who also went to Monument. From Flying Cloud Institute came another grad Lindsey Berkowitz, and from Matrushka Toys and Gifts came owner Brooke Redpath, also a graduate.

On the younger side of the adult professional/mentor equation was Jackson Lyons, assistant engineer at General Dynamics. He grew up in Columbia County, New York, attended Hudson Valley Community College and then transferred to Rensselaer Polytechnic Institute to finish out his degree in engineering science. (General Dynamics’ Pittsfield headquarters regularly posts dozens of job openings they have a hard time filling with local talent. 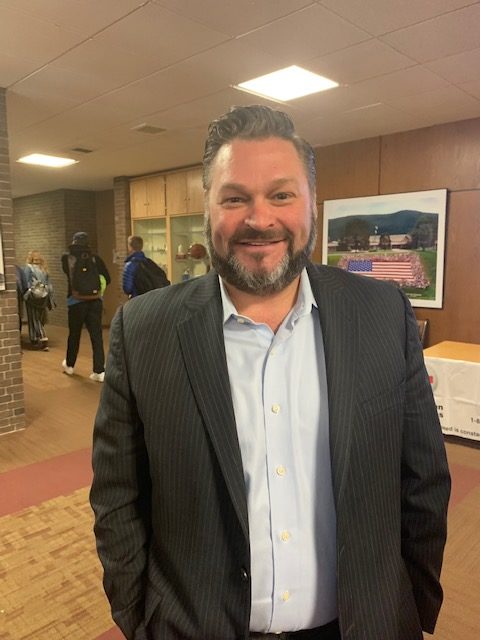 Lyons sat on the Applied Engineering and Advanced Manufacturing panel along with Steven Boyd of Boyd Technologies, a Monument graduate and father of a current freshman, and contractor and architect Bruce Moore.

Boyd was impressed with the quality of the questions students asked, which ranged from “Can I make bad decisions?” to “What did you study?” and “Is this your dream job?” To that last inquiry, he responded: “No, I don’t know what a dream job would be. There are passions, and if you follow a passion, then, on those days when it really just feels like work, you still have something that gets you out of bed and keeps you going.”

Another theme Boyd identified was the overlapping nature of careers “where someone might really want to do engineering, but also be interested in the health and medical field. They have an ability to find a career that blends passions. Kids at this age, why would you have any experience knowing that there all these little directions you can end up?”

I was part of the Communication and Performing Arts panel, along with Doug Robbins of Xenon Media and Dan Lipson of the Emerging Artist Network. Robbins had gotten connected with Monument through local director Cynthia Wade, who was also the reason Robbins ended up purchasing a house in Great Barrington, into which he and his wife plan shortly to move full-time: “Now I’m exploring what I want to do for the rest of my life.” Of his career, he said, “I’ve had a great journey in doing live action production, visual effects, working with ad agencies.” He eschewed the term “entrepreneur,” preferring “self-employed,” since many other people do similar work to his. He “just didn’t want to work for anyone else.”

Lipson is in the start-up phase of a new music technology platform, based in Great Barrington, that looks at artists’ streaming, touring and social media and scores them. “We’re using that to build an app called Labl that music fans can use.” It will work in a similar way to fantasy sports, he said, but using musical artists in lieu of sports teams, “betting that you’ll have a winning label against your friends.” A Monument student had been matched with Lipson’s company in an internship, which is how he made it onto the Career Day invite list.

Ninth-graders Keira O’Rourke and Tessa Climo were positive about the way they’d spent their morning Said Keira: “I found it interesting that so many around here have so many different variations of careers, and get to travel, and pursue things that they didn’t always think they’d end up doing. I think it’s cool that they’re doing things they didn’t necessarily plan for.”

Kate Goble just might be the freshman most clear about her chosen path. She told me: “I know exactly what I want to do. I’m going into stage acting and I’m going to be on Broadway eventually, sooner than later. Musical theater is definitely my favorite medium of the theatrical arts. I’m taking a lot of steps to get toward that goal. I do a lot of community theater and I’m going to ask the director I work with if I can start getting equity points.” She’s working on an actor’s resume in anticipation of an audition on May 4. In school this semester, she’s taking Acting and Directing and Advanced Drama.

Samantha Taxter, on the other hand, is not as focused: “I have no idea what I want to do after high school or in college, so these programs and this whole week we’ve been working on pathways and career cluster tests and they’ve all been really helpful for me. 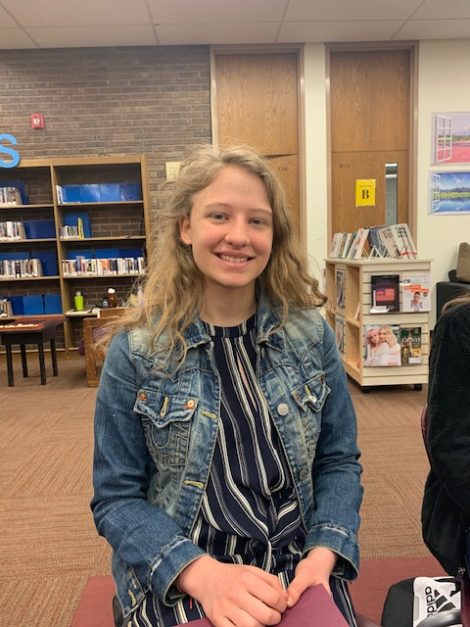 She was especially struck to learn about the interconnectedness of subjects that she’d always seen as distinct and separate: “There are a lot of aspects that you wouldn’t expect. I just came from the art and design group and they were like, ‘Take a business course, take a communications course,’ because you’ll get nowhere without knowing how to do finance and business.”

Charlie Rusk was the senior who helped lead the Communication/Performing Arts group. He’d taken an unusual path through high school, getting most of his required credits out of the way in freshman and sophomore year, thus freeing himself up to delve into his passion for drama later on. In the fall Charlie will be headed to one of the three performing arts colleges to which he’s been accepted.

Student questions in our group were thought-provoking.

We got: “What’s your favorite kind of weather?” (You can apparently tell a lot about a person by the sort of weather he or she likes. I liked a dry fall day, Robbins and Lipson liked it all except for mud season, Charlie could do without the cold entirely.)

Then: “Who’s the most famous person you’ve ever met?” (Charlie once literally bumped into Lin-Manuel Miranda. Robbins worked with Magic Johnson, I met Andy Warhol a month before he died, and Barack Obama had to be dragged away by his handlers from a conversation with Lipson and his wife.) 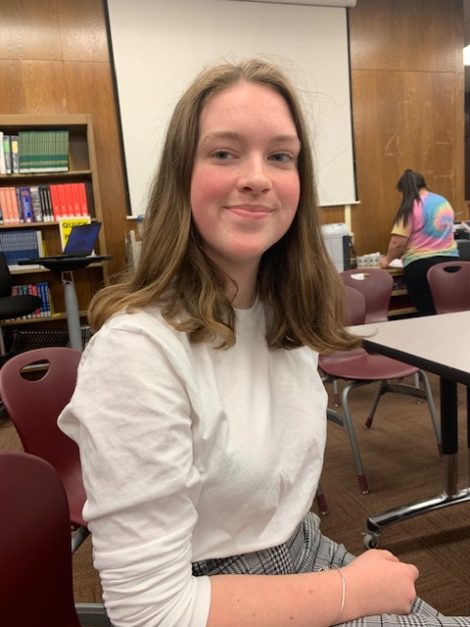 Flynn made his rounds to each group and spoke to as many participants as possible. “What I loved about it,” he said, “was I felt like the groups were well-mixed with a range of kids who don’t always find themselves together.” (Our high school students generally take classes based on three different tracks, or levels; Honors or Advanced Placement, College Prep and Standard.)

A high point was speaking to a young woman who “was lit up” by a great conversation she’d had with Jess Cooney, who owns a successful interior design firm in Great Barrington. The student came away excited at the idea of doing real work out in the world, using her passions for art and design “working in a medium she loves,” Flynn said.

In our last group of the morning was a bespectacled boy in a red bandana who periodically combed his impressive crest of hair. He at first tried to hide behind one of his classmates, but was eventually the one to ask the most-famous-person question. John S. said of the day, “It taught me that you can start off with nothing, and come out with big things as an entrepreneur.” He was speaking of John Field of John Field Tree Service. Field had told students the story of how he’d “just started off with a chainsaw, and ended up buying more and more tools and hiring more and more people, and now he has a big, big company.”

In his regular school day, John enjoys his automotive class the most. His father is a mechanic, and he said, when he returns to Ecuador next time to visit him, “I wanna know how to work the cars so I can help at his shop.” As for spring break this coming week, John will be hard at work as an assistant to a local landscaper. He thinks highly of Monument, where, as he put it, “there is lots of potential, and lots of support.”

Flynn is pleased with the response from adults and kids alike on this first Career Day effort, and is looking forward to expanding it next year. “This year it’s about taking manageable first steps, and finding ways for it to be integrated into the classroom.” He pointed out, too, how responsive the community had been to his requests. “Our community members who get it, who give back, take time out of their day to make this contribution, for me this was the best of our community coming together.”

The ninth grade as a cohort seemed to agree, or at least to find the event worthy of their time and attention. At 10:45 a.m., as visitors were filing out the door to get back to the business of their lives and the freshmen were dispersing throughout the building to get back to theirs, Flynn happily reported that there had been 100 percent attendance in the Career Day program—not a single student skipped.