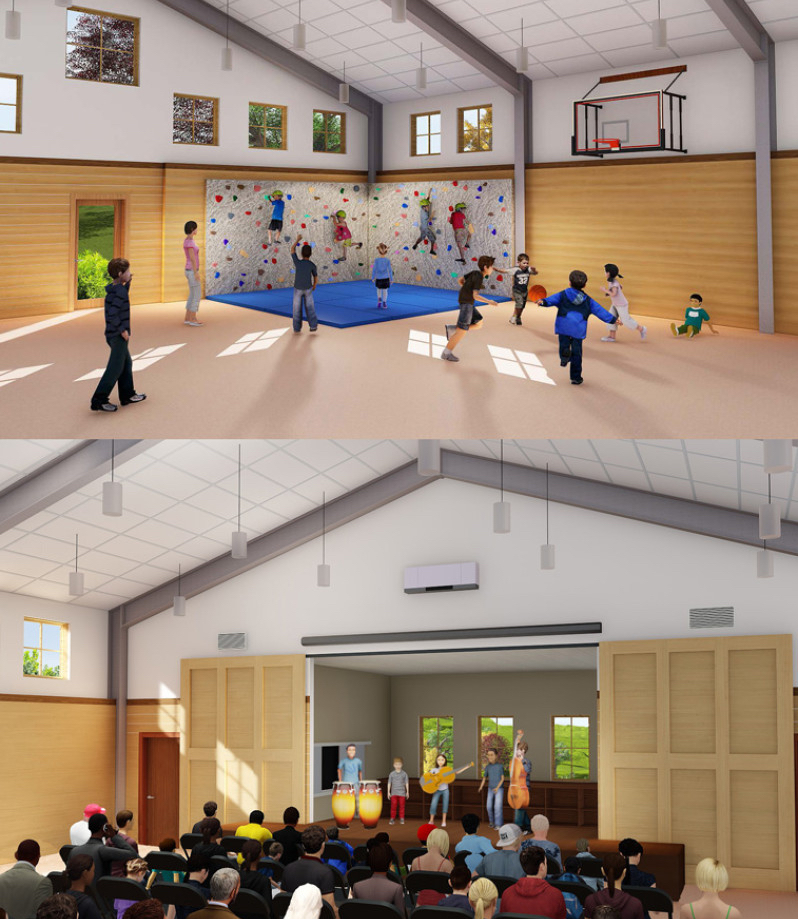 Lenox Dale — Parents, faculty and students gathered around the aptly named “big rock” at the Montessori School of the Berkshires on Friday morning to hear co-founder and Head of School, Todd Covert, announce “Guess what? We have some new spaces!”

Beneath clear blue skies and surrounded by a perimeter of tall evergreens, the community gathered to celebrate their collective work in making what was once a vision a reality: the completion of Phase I expansion and the kick off of Phase II, funded by the $2.95 million Go Beyond Capital Campaign which was launched at this time last year.

On Friday morning “Family Sharing,” a regular event where classrooms pause and children invite their parents and other family into the school to demonstrate their work, was well underway. Just after 11 o’clock, the bright and airy elementary classroom was bustling. Meagan Ledendecker, the School’s co-founder, Education Director, and Elementary Program Guide, pointed me toward students willing to share their work. Julian, age 11, was seated at a child-sized worktable, flanked by his parents.

He was crouched over a “pin map” and, when asked if it was a geography lesson he pondered the question for a moment before replying enthusiastically, “It’s an adventure lesson!” In the center of the room, sprawled on the carpet, nine-year old Athan was hunkered down over an interactive Periodic Table of the Elements. In Montessori schools, where the environment is a critical part of nurturing both cognitive and intellectual development in children, these spaces empower children and foster their independence.

“What a difference a year makes!” declared Church Davis, Chairman of the Board of Trustees, in his opening remarks. Davis called the completion of Phase I an “amazing endeavor” and applauded the efforts of so many who have helped MSB “transition to maturity.” Davis went on to recognize architect Dana Bixby as being both “elemental and instrumental in the expansion of the school,” noting the dual “functionality and aesthetic” that are part and parcel to the Montessori experience.

School administrators used Friday’s event to share with the extended community the first phase of a 7,300 square foot addition that will complement the school’s 9,000 square foot existing space. Happily in use since February is the new adolescent classroom, visual arts studio, library, lounge, and staff offices included in the first part of the expansion project.

It took more than a year of careful collaboration between MSB Head of School Todd Covert, Bixby and Joe Lewis, the representative for general contractor Allegrone Companies to ensure that the new space would fully support the school’s mission: to inspire children to develop independent thinking, self-assurance, inner discipline, and a love of learning in an authentic Montessori environment.

“Last year was a busy year and a noisy one” said Covert, upon taking the podium. Covert’s comments centered on the School’s continually thinking “how to evolve.” He stated, in a press release, “many people have written about what schools should look like, but no one has created the total developmental package that Maria Montessori has.”

Building on this idea, he cited two particularly poignant comments from students since moving into the new spaces over the winter: “I love having a library” and “I like being able to spread out.” Covert conveyed that he agreed with both sentiments. He then went on to quote Maria Montessori, on whose philosophy MSB was built, as saying “education is not what the teacher gives; education is a natural process spontaneously carried out by the human individual, and is acquired not by listening to words but by experiences upon the environment.”

As to the tangible evidence of the expansion’s success? Fifteen Adolescent students now occupy a spacious suite, which includes a full commercial kitchen, a science lab, a quiet study room, and laundry facilities. With more space, students can sit at the kitchen counter doing their Algebra and waiting for the laundry to finish while a classmate cooks muffins for the hot lunch program. They can spread out in their small groups for their weekly research or book club, or they can be in the quiet room to sit and focus comfortably. “The new classroom gives them a home base where they can lay all those things out in front of them and learn how to organize it all, and a safe place to make mistakes during that process and reassess,” said Lead Adolescent Guide Julie Haagenson. “I like that they enjoy being at school. They don’t want to leave at the end of the day.” Like all Montessori classrooms, the Adolescent curriculum is individualized and self-paced, with holistic developmental support and an emphasis on community at its core. And, in Montessori lingo, the “guides” are the teachers, helping students to learn actively rather than passively.

Campaign co-chair and current parent, Dan Neilson, acknowledged at Friday’s event the “remarkable, heartening generosity” of the MSB community. He went on to note that the “Go Beyond” Campaign, originally intended as a five year fundraising effort, is within $40,000 of covering the construction costs on both phases of expansion. The focus, he articulated, is on participation noting that not just the large gifts — rather every modest donation — leaves the School one step closer toward bringing their goals to fruition.

MSB has already begun work on Phase II, which includes a space large enough for whole-school gatherings and indoor sports, as well as an adjoining performing arts space with flexible staging and seating for smaller in-house performances and presentations.

The combined spaces will accommodate up to 180 people for performances and gatherings, band and string performances, and larger events such as the Back to School Potluck or the annual Senior Elementary drama performance. Construction is expected to finish by September, 2017.

In its first decade, MSB more than quadrupled its enrollment. Expanding beyond its initial early childhood class with 24 children aged three to six, the school added programs over its first four years to encompass the full Montessori curriculum from toddlers through eighth grade. MSB’s existing building, designed to accommodate 125 students in five classes, was strained to near capacity prior to the expansion. The School’s Phase I expansion has allowed for six mixed-age classrooms and an overall capacity of 140 students. Those interested in learning more about MSB can visit www.berkshiremontessori.org.