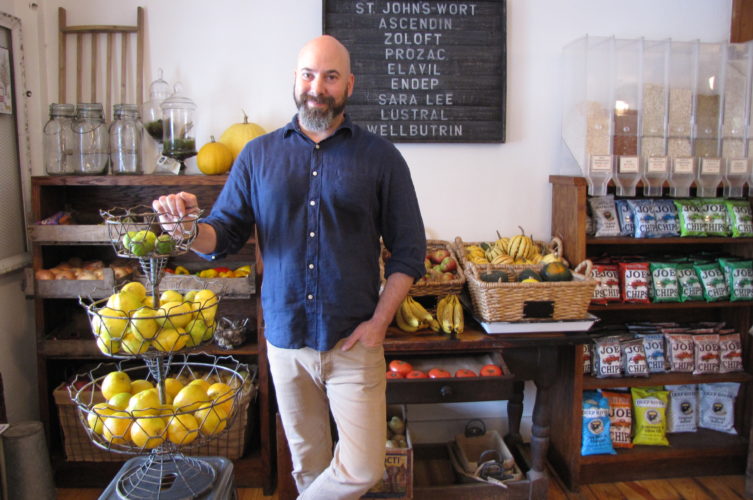 Monterey — Monterey is not just on the way from Great Barrington to Jacob’s Pillow. It’s a picturesque town with about 900 full-time residents whose population swells to several thousand in summer. You can go boating on two lakes, buy fresh chèvre and chat up the goats at Rawson Brook Farm, or visit the homes qua studios of a number of local artists.

You also can visit the Monterey General Store, in the very center of town across from the junction of Tyringham Road and Route 23, but if you’re not sure which century it is when you walk in, it’s because chef-owner Scott Cole allows its 234-year old ambience to mingle freely with its 21st century patrons. Scott’s respect for the store’s longevity appeals to the locals who support the store and to the out-of-towners who can’t quite believe their good luck in finding such a place.

Scott’s 19-year proprietorship of Caffe Pommo D’Oro in West Stockbridge ended in spring 2012 when he began to renovate the antiquated Monterey General Store. He began hiring staff for the store in May 2012 and opened officially in late summer. The General Store is open Monday – Saturday 7 a.m. – 6 p.m. and Sunday 7 a.m. – 3 p.m.

There is a crowd of people who go to the store regularly for breakfast. “People will come in to read the paper and have some coffee,” says Cole. “When they’re up here for the weekend, Dan Barber, his wife Aria and their daughter Edith stop by.” There also is a regular lunch crowd, including even people who make day trips from Hartford, Conn., for the experience.

The General Store serves breakfast and lunch à la carte, with a wide array of freshly baked goods, all made in house. For lunch there are freshly made soups, salads, and sandwiches. For dessert at any time of day there are Scott’s handmade pies, croissants, and tea breads.

(See below for his recipe for the Plum Hazelnut Tart.)

Given Scott’s history as a baker, it’s no surprise that the store’s baked goods are very popular. “Our pies almost have cult status, “ says Scott. He is the main baker, but long-time employees Kyle Pierce and Nina Campus, who have worked in his store since its opening, also help with the baking. Right now the store is selling two types of apple pies, with apples from Riiska Brook Orchard in Sandisfield.

But it’s not just his sweets that appeal to the community. He keeps quart bottles on hand for his customers who can’t get enough of his fresh soups, made daily.

Scott was a member of the group that helped form Berkshire Grown in the late 1990’s, so it’s not surprising that he buys as much as he can from local farmers. Obviously his chèvre comes from neighbor Susan Sellew’s Rawson Brook Farm. He buys a lot of his fresh vegetables from Laura Meister of Farm Girl Farm, who grows the kinds of things he likes, such as spring onions, tomatoes, winter squash, and herbs. And from Riiska Brook Farm he gets eggs, blueberries, and apples.

The Monterey General Store provides some catering, but is limited because of the rudimentary kitchen. “There’s a great convection oven for baking, and two induction cooktops,” Scott says, but that’s as much as he can have until he’s able to install a new exhaust system. He has been able to host private dinners at the store, with up to 30 guests. “There was a New Year’s Eve party for 12 local couples, and I’ve had a wedding reception, too.”

But Scott is held back by the constraints of the small kitchen that won’t be renovated until Winter 2015. After he redoes the kitchen, he hopes to get a license for a package store.

Scott started sponsoring music nights in early spring that were instantly successful. The music nights will begin again in late fall with Robert Oakes and Kate Smith, singers and songwriters from Tyringham.

Scott is a collector. Over the years he has accumulated vintage and antique wares, which he now sells at the store. In addition to his own collection, he is finding new sources, such as New York New, a holistic life style trade show. But he doesn’t have to travel to buy from Blue Q, “the insanely creative line of novelty items by the Nash Brothers in Pittsfield.” The items may be humorously packaged, but “they’re well made. And the soap smells good.”

If you need a yoyo or a slinky, magic sets, balsa wood planes, or letter press items, the Monterey General Store will satisfy. There are several tables between the service counter and the seating area that are packed with these non-essential but fun-filled items.

The Monterey General Store is an anachronism that is once again a successful community asset. You should visit it and see for yourself.