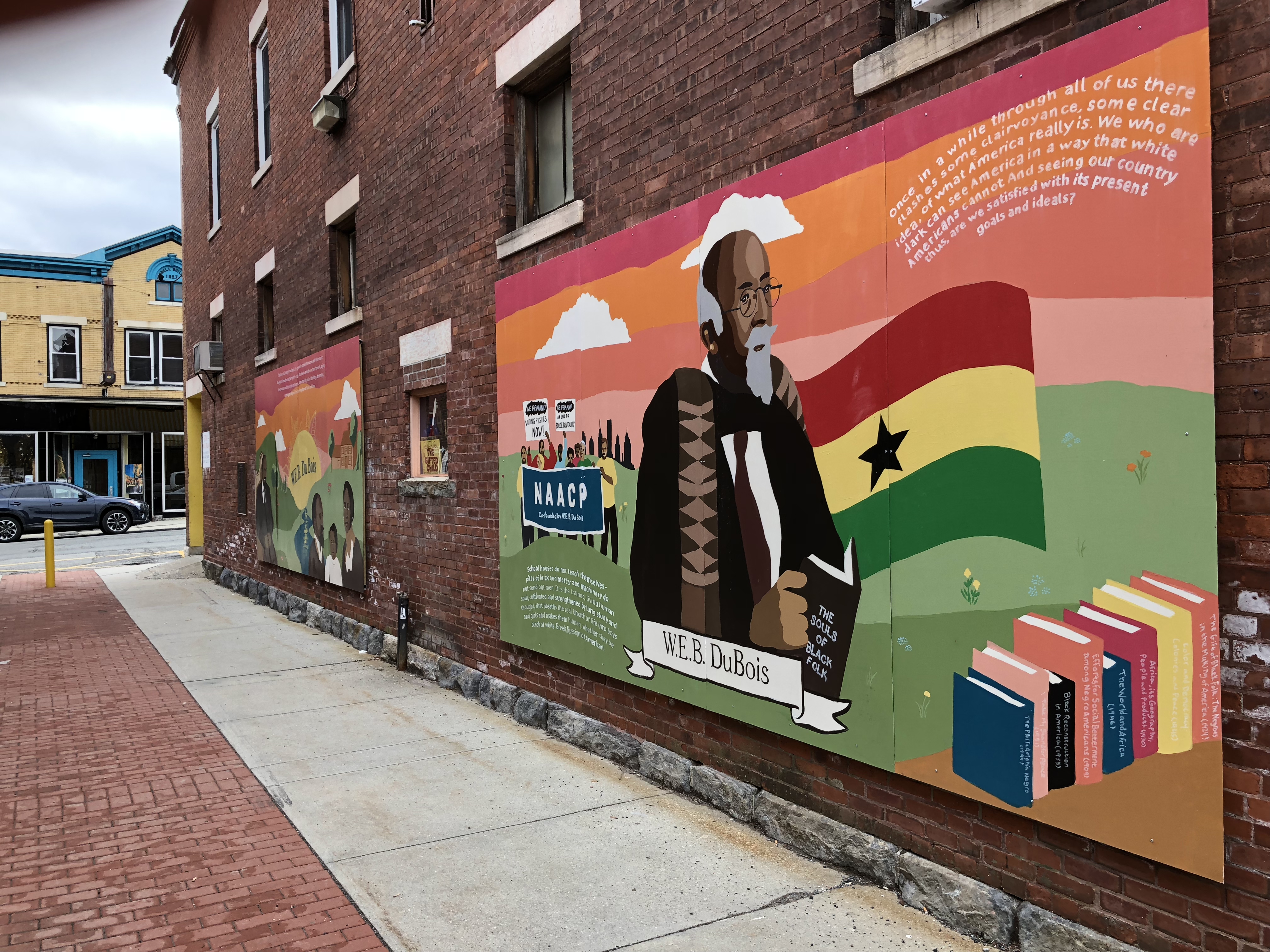 Great Barrington — “I knew it was right down my alley” said Sophie Shron, a senior at Monument Mountain Regional High School, of her creating the designs for a series of downtown murals celebrating W.E.B. Du Bois.  The murals, currently on display on the south wall of the Triplex Cinema and the west wall of 38 Railroad Alley, have garnered national attention after Shron was awarded a Silver Medal in Painting from the Scholastic Art & Writing Awards for her outstanding leadership in the design and creation of four murals celebrating the life and accomplishments of Du Bois, the well-known civil rights activist, writer and Great Barrington native.

“This was my opportunity to teach Great Barrington the relevance of Du Bois’ writing, especially in today’s political climate,” Shron wrote in her submission. “The community has had nothing but wonderful reactions, and it was very rewarding to have the opportunity to educate people through art and to see their reactions to it,” she added in her written statement.

It was another artistic endeavor that introduced Shron to Railroad Street Youth Project (RSYP) — the dynamic youth empowerment nonprofit organization serving young people in southern Berkshire County — after she got involved with the organization through a friend who was an intern. Shron began attending the Youth Operational Board meetings, weekly get togethers aimed at funding youth projects; she was making wire-wrapped jewelry at the time and, in November 2016, proposed a workshop that was ultimately funded. It was at this same time that plans for the murals — to be unveiled in conjunction with the 150th anniversary of Du Bois’ birth in February 2018 — began to unfold.

From its inception, the W.E.B. Du Bois mural project was a youth-led initiative. Shron volunteered to lead a team of almost 20 young people in more than 10 rounds of collaborative revision. In creating the designs for the murals, the team focused on bringing Du Bois’ work and passion to life, incorporating images of his family members, historical contributions, and his love for the region.

Shron cites her work with classmate Zufan Bazzano as being particularly constructive; while Shron served as the design leader, charged with drawing, drafting and layout, Bazzano did all of the reading and the researching, helping to identify which elements would ultimately be incorporated into the finished murals.

The project literally came to fruition over a series of community painting weekends held at RSYP where the designs were projected on panels, painted with exterior latex paint, and then transported to their respective “walls.”

“We are proud that the Alliance for Young Artists & Writers has recognized Sophie’s accomplishments and the significance of the mural project with this award,” says Ananda Timpane, RSYP’s Executive Director. “It is a perfect example of the great things that happen when youth are supported in their community to take risks.”

When I caught up with Shron on Tuesday afternoon, during a break from her internship at Peter Fasano’s screen-printing factory, it became clear that her passion for both creativity and independence have been percolating for some time.

“I do a little bit of everything,” Shron explained, noting that she has always loved to sketch, using a pencil, and that she also likes to sew (a prom dress of her own design will make its debut next month at the MMRHS senior prom).

Shron also points to veteran art teacher Krista Kennedy’s portfolio class — recognized for its being both independent and self-driven — as propelling her passions forward.

“I’ve never taken a class like that,” remarked Shron who is the daughter of Jason Shron and Kara Staunton-Shron of Great Barrington.

As for the teacher’s perspective? “I admire Sophie’s soft-spoken, confident and determined demeanor,” said Kennedy.  “Sophie’s ease with her creativity and artistic practice evokes an old soul,” she added, commending Shron for a work ethic she called “steady and fluid.”

Shron’s passion for art is two fold: she enjoys working in both physical and digital media. This fueled her desire to take part in an Alternate Senior Year, where students are placed in an internship for the second semester while getting a taste of the real world. “I’ve always been independent,” said Shron, adding, “I [pursued an internship] because I wanted to get a taste of the real world and…I wanted to try something new, get a taste of something different.” These breaks from the otherwise structured, scheduled life of a high school student will undoubtedly leave Shron poised for her next challenge: college. She plans to attend Parsons School of Design in New York City — one of five colleges comprising The New School — which is widely regarded as one of the most prestigious art and design schools in the world.

Shron is confident but humble, and her brown eyes hint at the potential being harbored in this young woman. Her involvement in the community runs the proverbial gamut: she designed the chalkboard menus at two local eateries, The Well and Cafe Tangiers; she can be found volunteering for the Special Olympics in support of her brother who has Down syndrome; and she and her family are active members at Hevreh. As to the most unexpected element of this endeavor? A fervent interest in Du Bois, an individual about whom Shron knew little if anything  prior to the commencement of this project. 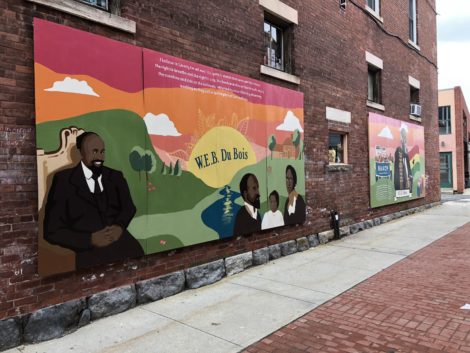 Shron cuts straight to the chase: “So many things [Du Bois] wrote, [it’s] a little shocking how relevant they are …the topics could have been written about today,” she added. She then continued, “I remember one thing that really stuck with me,” she said, going on to cite a letter written in 1914 by Du Bois to his soon-to-be 14-year-old daughter, Yolande, who left  home to study at Bedales School in England.  An excerpt  reads, “Above all remember, dear, that you have a great opportunity…Deserve it, then. Study, do your work. Be honest, frank and fearless and get some grasp of the real values of life.” It is this unwavering stance that is so appealing.  “He really believed in education,” remarked Shron. “My being a female in high school, it really resonated with me,” she concluded. And Shron’s initiative would likely have resonated with Du Bois, an individual whose legacy has quite literally been splashed upon the bricks and mortar of his birthplace thanks to the efforts — and hopefulness — of the next generation.