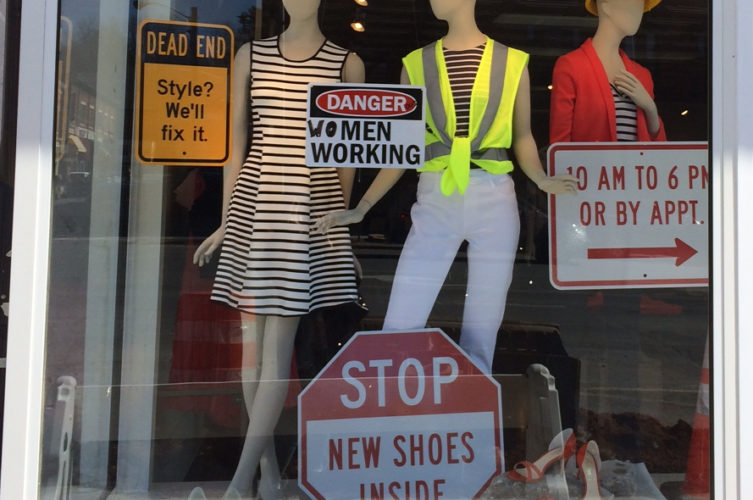 Great Barrington — With the recent butchering of trees and the cracking apart of sidewalks, all part of the state’s Main Street reconstruction project, one would think that shoppers might forego a trip downtown, and that merchants might be cowering inside their stores, swooning in despair.

But the reality appears to be quite different.

“People are still able to access the front of the store and walk down the sidewalk,” said Keith Watkins, working at his mother’s store, Evergreen Fine American Crafts, a shop specializing in handmade gifts. There didn’t appear to be a drop-off in customers, he added, at least not due to the work immediately outside the front door, where half the sidewalk had been removed as part of the infrastructure upgrade. This time of year, he said, “it’s usually slow anyway.” He said the Massachusetts Department of Transportation (MassDOT) workers outside “have been as accommodating as possible.”

The ladies a few doors down, at women’s clothing boutique Louisa Ellis, went a step further, and re-designed their typically hyper-feminine window displays to reflect the manly spectacle outside. Mannequins in designer dresses sported hardhats amid sassy road signs and orange cones. Lead Stylist Sarah Jones said the MassDOT workers gave them stickers for the hats, the cones, and even cut road stone from the street for a shoe display. “They cut it to size,” Jones said.

“They turn off their equipment or move it as a courtesy to customers when they want to come in the store,” Jones added. “They have been lovely.” She said that their customer traffic was “very normal” for the off-season, and that the store offered to let customers in through the back door if they call first.

At Matrushka Toys & Gifts next door, owner Brooke Redpath said she was struggling that morning to stick colorful flags in the newly exposed ground in order to draw attention to the storefront. A MassDot worker wielding a jackhammer and excellent manners noticed and came to the rescue. Also that morning, she said, the men helped a customer load heavy items into their car, and later asked Redpath if she needed help with her FedEx boxes.

The Main Street Construction Project is a $5.4 million state Department of Transportation (MassDOT) plan to improve the one-half mile stretch on Route 7 from St. James Place — also known as Taconic Avenue — north to Cottage Street. The project will replace roads and pavements, “improve sidewalks, drainage, curbs, traffic signals, crosswalks, and lighting,” according to the town. The reconstruction will also add better crosswalks, and bike lanes.

The project will proceed throughout this construction season, and into the following year. During the tourist season in July and August, work will be suspended in the downtown core, from Bridge to Elm streets.

“There’s no point in grousing about it now,” said Jennifer Currie, an artist and life coach who works at Matrushka one day a week. She was referring to the shakeup outside and Main Street’s former allée of Bradford Pear trees that were chopped down last week. She said that everyone in town “seemed to be in mourning” right after all the trees came down. She said she, too, was “sad about the trees,” but that at this point, protesting about it was, she said, with truly no trace of a pun, a “fruitless endeavor.”

“We might as well be on board and look forward to the transformation,” she added, as a handful of customers browsed in the store.

Redpath also said she felt hopeful about the myriad of new trees scheduled for planting at the conclusion of the work. At one point, she laughed and motioned to a browning mini-Christmas tree in a planter that had been shoved to the side of the road. “It’s the last tree on Main Street,” she joked.

But that sunny spring afternoon, people walked up and down the sidewalk as if nothing had changed.

As Sarah Jones from Louisa Ellis pointed out, “nothing stops a shopper.”

Yet there is enough of a nagging worry to have prompted Evergreen owner Barbara Watkins to start the Downtown Promotion Committee, a now informal group dedicated to “bring business to GB during this construction period.” Watkins says that based on what she knows about other towns that have gone through similar upheaval, “this is going to affect us in a big way.”

The goal of the campaign, she said is to get visitors to say, “I shouldn’t avoid GB, I should go there.”

Watkins and the committee have designed a logo, “I Dig GB,” to go on shopping bags and pens, for instance, not to make money but rather to spread the message. The committee is planning a “no-sidewalk sale” for Friday, April 24, and is batting around other ideas. The most ambitious of these is what Watkins now refers to as “Dining Downtown,” slated for June 1 (rain date June 2), which will be modeled after the white dinners held all over the world. The committee hasn’t decided on a name yet, but Watkins said 200 feet of tables — say, from Emporium to Barrington Outfitters — will be lined up on Main Street for a three-course dinner catered by Allium, Castle Street Café and Prairie Whale.

“We’re really trying to do something to keep GB alive,” Watkins said. “That’s the goal.”

For more information about I Dig GB and the downtown dinner write to Barbara Watkins at: info@evergreencrafts.com.

For Main Street construction project weekly updates, click the green button on the right side of The Berkshire Edge homepage.