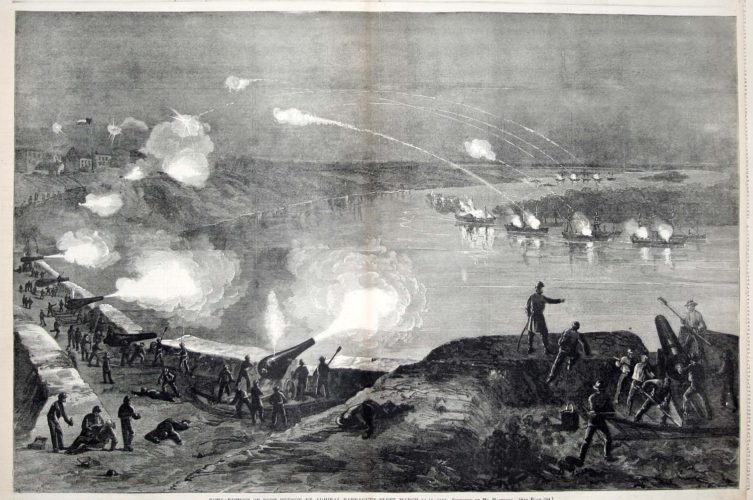 The May 1863 assault on well-fortified Port Hudson, La., was the longest military siege ever on American soil. (Harper’s Weekly, Library of Congress)

With area Memorial Day activities curtailed, a visit to local cemeteries is in order to visit graves of our veterans. One would think the rigors of a “Forlorn Hope” assault on a Confederate fortification in Port Hudson, La., in 1863 would be enough violence for one Union soldier’s lifetime. But a Great Barrington man — recipient of the Medal of Honor — went on to experience a traumatic gunpoint home invasion a decade after war’s end. That story will be told in Part 2. First we learn about the man’s heroism under fire in wartime.

Serving with Company D, Massachusetts 49th Infantry, Sheffield native Frederick N. Deland (1843-1922) “volunteered in response to a call and, under a heavy fire from the enemy, advanced and assisted in filling with fascines a ditch which presented a serious obstacle to the troops in attempting to take the works of the enemy by assault” at Port Hudson, La., May 27, 1863, according to the Congressional Medal of Honor Society.

Deland accepted his medal from President Grover Cleveland in Washington, D.C., on June 22, 1896.

After training at Camp Briggs in Pittsfield, the recruits shifted to Camp Wool in Worcester then traveled to New York for provost duty from Nov. 21, 1862, until Jan. 24, 1863. The men boarded the steamer Illinois and headed south, arriving Feb. 3 in New Orleans to join other Union forces attempting to wrest control of the Mississippi River, a confrontation pitting 30,000 bluecoats against 6,800 grey-uniformed troops.

The all-Berkshire regiment took part in the longest siege on American soil in history,

The Mass. 49th along with the New York 116th and Maine 21st Regiments plus the Louisiana 1st and 3rd Native Guards (black soldiers) were attached to the 1st Brigade, 1stDivision, 19th Army Corps, Department of the Gulf. They participated in reconnaissance and assault operations against Port Hudson May 18 to 24. The unit saw brief action at Plain’s Store then returned to Port Hudson for renewed siege.

For a “Forlorn Hope” mission, five men were solicited from each regiment. Plunkett volunteered but was refused as only one field officer could participate. Lieut. Col. James O’Brien of the 48th went, along with Deland, Lt. Thomas Siggins (1828-1880) and 1st Sgt. William S. Gilbert (1841-1885) of Great Barrington and one other.

According to Sumner, “Company F was guarding the baggage train; about one hundred men were on picket duty, and a large number in convalescent camp and hospital, so that but two hundred and thirty-three men took part in the assault. Of this number sixteen were killed and sixty-four wounded, making eighty in all, more than one third of the whole number. The Colonel and Lieutenant Colonel were both wounded, and every Company had one or more officers killed or wounded. Officers and soldiers who served throughout the war, and who participated in the assault of May 27, have pronounced it one of the severest and bloodiest engagements in the history of the war.”

Sumner delivered a lengthy narrative at a reunion of 49th volunteers in Pittsfield on May 21, 1867. The verse recounts comfortable life in training camp:

Pete Springsteen furnished us with ‘grub,’ according to our means

The beefsteak tasted might good, and eke the pork and beans

Our appetites were glorious, and we minded not the odds,

But Port Hudson proved another story:

Yet not unscathed did we escape the battle’s angry storm—

I stand surrounded here by many a scarred and shattered form;

The grim Death-Angel, hurling forth his missiles thick and fast,

Gave some of us the tokens of his presence as he passed.

Sumner at the reunion proposed a toast to Siggins, “the worst wounded man of the Regiment who still lived. No one who saw him after the battle dared hope that he would ever return to Berkshire, — but it was ordered otherwise and he was here to-night.”

Deland in his own detailed account, which was published in The Berkshire Courier after at the regiment’s 19th reunion in Great Barrington in 1885, said: “There was a deep ditch in front of the parapet. We had quite a distance to march over ground covered with fallen trees, brush and stumps, and while passing over this ground we should be under the enemy’s fire. It was proposed to construct fascine to throw into the ditch, so that when it was filled the men with fixed bayonets could pass over and attempt the capture of the fort. For this dangerous work volunteers were called for from all the regiments. Our captain called volunteers from Company D. Lieutenant Siggins said he would go … With the enthusiasm of a boy of 18, I too joined this Forlorn Hope. I shall never forget that night. We were encamped in a beautiful grove of oaks. The full moon arose and shed its silvery light through the branches, and glistened on the long line of shining bayonets….”

In morning, “We were drawn up in line of battle at the edge of the wood. The colonel called for the volunteers to step to the front. These were formed in our company commanded by Lieutenant Colonel O’Brien of the 48th, Lieutenant Siggins of our Company second in command … With a fearful crash a shell came tearing through the trees, a piece of which struck H.A. Bristol and he was taken to the rear. The order came to move forward. The fascine party emerged from the woods and steadily advanced towards the works. With a horrid screech a shell came just over our heads. Then another. Thick and fast they came, and soon one ploughs through the ranks and a comrade is killed. Now small arms begin to be used, and the ‘zip’ of the bullets salutes our ears. Faster and faster they come and comrades are falling on all sides. The brave Colonel O’Brien falls dead, while waving his sword to cheer us on. Lieutenant Siggins receives a fearful wound in the mouth. The color bearer falls dead and the flag goes down. Another soldier seizes it and steadily marches forward, but soon he too receives a wound and falls. The regiment fares no better than we….

“Colonel Bartlett, the only mounted officer on the field, struck by a ball which shattered his wrist, falls from his horse, which careering wildly to the front, is seen by the 49th, and word goes from one to another that the Colonel is killed. Lieutenant Colonel Sumner had been severely wounded, leaving Major Plunkett in command. We feared the tall major would be a conspicuous mark for rebel bullets, but he stood by his men and came out unharmed. Steadily had our men marched against the storm of iron hail, but the difficulties to be overcome were too great.”

The assault that day failed to take the fortification. But Union soldiers persisted into July then halted, as Deland wrote, “when news came that Vicksburg had surrendered to [Union Gen. Ulysses S.] Grant. [Confederate] General [Franklin] Gardner knowing that it was useless to defend his position further sent out a flag of truce and surrender to [Union] General [Nathaniel] Banks. This was welcome news to us.” Grant claimed Vicksburg on July 4. Banks claimed Port Hudson July 11. The Union Army had taken the Mississippi River and split the Confederacy.

After further action in the Bayou la Fourche expedition and at Cox’s Planation in Donaldsville, the 49th departed Baton Route Aug. 1, marched via Illinois, Indiana, Ohio and New York states to arrive Pittsfield Aug. 22 and muster out Sept. 1, 1863.

The regiment lost two officers and 28 enlisted men killed or mortally wounded and 84 dead by disease, according to Civil War Archive.

Deland returned home to what he expected to be a quiet life — until he experienced another fateful May in 1875, as will be told in Part 2.