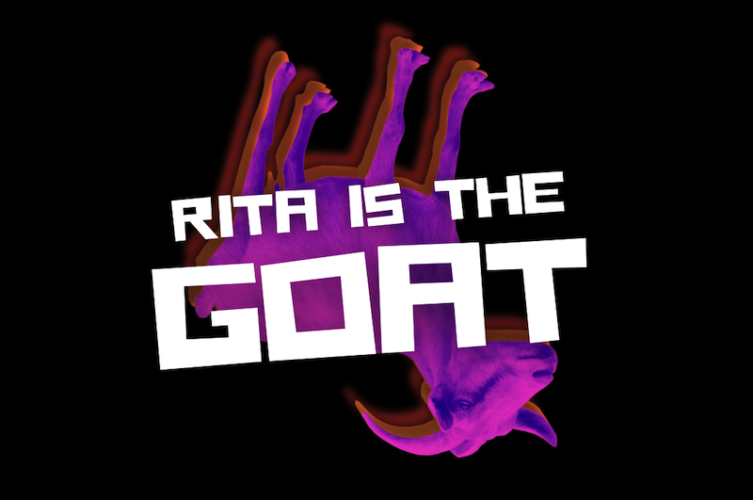 Melanie Maria Goodreaux stars in "Rita is the Goat" at The Foundry in West Stockbridge August 13–15.

WEST STOCKBRIDGE — For those who identify as women and mothers, society’s expectations can feel relentless. Individual opinions (bordering on judgment) — not to mention outlets for sharing those opinions — are everywhere, leaving many women to feel scrutinized no matter what they choose. Enter Melanie Maria Goodreaux — a poet, playwright, fiction writer, actor, and director-dramatist from New Orleans, Louisiana — who lives, writes, and creates theater in New York City. Goodreaux’s new work, “Rita is the Goat,” touches on the complexities of these truths and then some.

“Everyone tells you what you’re supposed to do, and how you’re supposed to do it — namely, that you’re supposed to be a mother, like it’s a given,” Goodreaux told The Edge, elucidating the very tension she grapples with in her new work. What began as a quest to write a solo show — developed during Goodreaux’s fellowship with the Dramatic Question Theatre (DQT) as part of American Woman, a series of solo shows about women living in the United States — “Rita is the Goat” emerges as a fantastical reimagining of a family at odds. The work, directed by Heather Harvey (a Brooklyn-based director/producer/writer who specializes in nontraditional storytelling for stage, audio, and screen) will be co-produced by DQT and The Foundry Friday, Aug. 13–Sunday, Aug. 15.

“[“Rita is the Goat”] presents some interesting angles on mothering, in that you have different characters approaching mothering and fertility in different ways,” that run the gamut from one who is “struggling and striving and wants to be a mother” to another who is not a mother (which inherently begs the question: ‘What kind of woman are you?’). Add to that a woman who, “by most standards would not be considered a good mother … [and] is running up against expectations people have with limited ability and proclivity to be a mother.”

As a single actor depicting seven characters, Goodreaux grapples with myriad issues in her newest work. First, when writing for a single performer, the tendency is to lean toward monologues. When working on this piece, Goodreaux was given some sage advice: just write it, and figure out how a single performer can move through a piece, including seven voices, later. The end result is a lot of dialogue, back and forth between the various characters, all of them played by Goodreaux.

“Writing the piece and performing the piece are two different things,” Goodreaux said of her evolving understanding of her own work. Approaching it as a playwright is a process that requires her to “feel and go into the depth of all the characters”; to perform it is “very, very different.” Call it stepping outside of her usual role, if you will.

Historically, her plays have pointed directly at race; here, she does so more implicitly, “inside of the language, where there is some edge.” Furthermore, Goodreaux describes herself as inclined “to mix sexuality with religiosity,” which reflects her deep Catholic upbringing; believing the two are intertwined, she distorts. Take, for instance, the goat. In the play, it is both Biblical in nature and representative of the scapegoats we create in families, in relationships, and in groups.

“If we cannot pinpoint a person, [and] get absolutely everything we want and expect from [them] or a [particular] situation, the tables can be turned to single someone out and send them off to the cliffs to survive and figure it out on their own,” Goodreaux said of the play’s central theme — “the loneliness [that comes when] we — in just trying to do the best we can in any given moment — get pushed to our edges by people who either misunderstand us, [or] who have to blame us for something they don’t understand.”

Goodreaux is enthusiastic about her upcoming show in West Stockbridge and has found The Foundry, and the DQT, to be incredibly supportive. So, too, has been her collaboration with the director, Heather Harvey. “It’s really wonderful to be working with … another African American woman, who is much younger than I am and brings a new eye to my work, which is really interesting,” said Goodreaux, who is excited to be with a live audience.

“I can feel how much everyone craves telling these stories to an audience,” Goodreaux said of her collaboration that — in addition to DQT and Harvey — includes Amy Brentano, The Foundry’s producing artistic director who, acting as a guest dramaturge, began working with DQT in January during the series’ online playwriting lab.

“This project brought together all these really neat women who are producing, and brings all these great resources to the table, along with fresh insight — it’s wonderful to get there,” Goodreaux said of American Woman, which is where it all began.

“I was tasked with writing a solo piece, and as I enter into these characters, I realize a lot of the voices sound like the hyper-critical voices you hear when you’re just walking around trying to be a person,” said Goodreaux, pointing to how each character is berated from all sides, be it for their size, their shape, or what they’re supposed to be, while just “trying to do the best they can.”

At one point, Harvey told Goodreaux her play explores a cruelty, in a way, that is also comical [insert the playwright’s laughter here]. And, while Goodreaux worries she’s created something dark, in reality she is simply shedding light on a universal truth — something she does with great intention. “If we don’t see plays like this, when will we ever be able to explore themes of cruelty, and bring a little bit of humor to the real outer edges of how people treat one another?”

NOTE: Founded in 2009 by former members of the Professional Playwrights’ Unit of the Puerto Rican Traveling Theatre, Dramatic Question Theatre (DQT) has developed plays that received an array of national honors and nominations for major awards, including the John Gassner Award for New Play, Lucille Lortel Award for Outstanding Play, Drama Desk Award for Best Play, and Outer Critics Circle Award for Best Play. The company develops plays by women and People of Color that deal with race, culture, and class. Concurrently, it builds a diverse audience from the Latinx and Black communities it regularly serves. Tickets to the August performances may be purchased here.