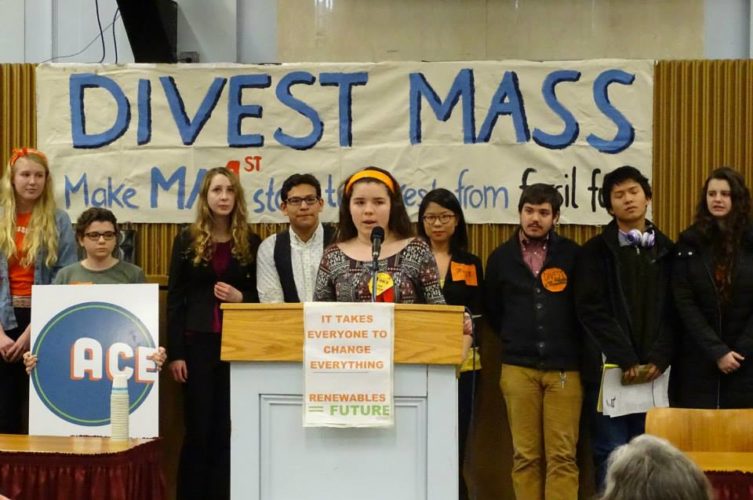 Editor’s Note: Last week, the Great Barrington Selectboard began consideration of a measure that would divest the town’s pension fund of its holdings in fossil fuel companies. Across Massachusetts there is a growing movement for just such a divestment.

BOSTON — Community and faith leaders, state legislators, and activists young and old gathered at the Massachusetts Statehouse on February 12 to raise the call for divestment of the state’s pension funds from fossil fuels.

Sponsored by 350 Massachusetts, the event was part of the Global Divestment Day of actions worldwide to rally and strengthen the growing fossil fuel divestment movement. As of September 2014, more than 180 institutions and local governments and more than 650 individuals had divested more than $50 billion in assets from the fossil fuel sector. As with past divestment campaigns, the current movement is being used as a strategy to weaken the political clout of a harmful industry.

“The aim [of divestment] is to weaken the grip that the oil and gas companies have on our political system,” explained Gary Stoller, Divestment Coordinator for 350MA Berkshire Node. Stoller was one of a handful of Berkshire residents who made the trek to Boston to participate in the forum, which included a panel on carbon risk, a voices for divestment rally, and a youth divestment rally.

Sen. Benjamin Downing of Pittsfield kicked things off with a call to pass legislation that would position Massachusetts to be the first state in the nation to divest from fossil fuels. Downing wrote and is lead sponsor of a bill (S.1225) that would divest the Massachusetts pension fund from fossil fuel interests. The Pension Reserves Investment Trust, valued at $54 billion, currently has about $1.4 billion invested in fossil fuel companies. The bill directs this Trust to cease new investment in these companies and to divest no less than 20 percent per year for a five-year period.

“Climate change is not a policy issue,” said Sen. Downing. “It’s a political issue.” He said if the Commonwealth is truly serious about leading the transition to clean energy and addressing the climate crisis, then divestment is a key next step. “If you’re in a hole, you don’t keep digging.”

Several financial experts proceeded to weigh in on the divestment issue during the panel on carbon risk. As Tom Francis of Fossil Free Indexes explained, the top 200 fossil fuel companies currently have 555 gigatons of carbon on their books, in proven reserves that they plan to burn in the next several decades. These reserves contain five times more carbon than climate experts warn can be burned if we are to stay within the 2°C warming limit.

When carbon regulations come into play, companies won’t be able to burn all of their reserves and those then become “stranded assets.” It is these assets – carbon reserves that must remain underground – that will devalue investment and make continued investment in these companies more risky.

“Divesting from fossil fuels may be regarded as the more responsible path than staying invested in them,” said panelist Leslie Samuelrich of Green Century Capital. “Transitioning to a fossil free portfolio may prepare our pension fund and investors for future carbon regulation now, possibly reducing future risk.”

A growing body of evidence, she said, indicates that divesting from coal, oil and gas carries no discernable financial risk. And divesting allows you to then reinvest your money into the growing green economy.

Despite the arguments in favor of divesting, most individuals and institutions are still hesitant to sever financial ties with fossil fuel interests. “You have to get at what’s really in the way – it’s not the data and it’s not the legal arguments,” said Samuelrich. For the most part, she said, money managers and investors are afraid to try something new, reluctant to break from the status quo.

Chuck Collins, co-founder of Divest-Invest, referenced some of the common objections to divesting from fossil fuels. Those opposed to divesting argue that it’s meaningless and hypocritical, that it politicizes investment policy, and that it is financially risky or irresponsible.

In refuting these claims, Collins explained that divestment does matter and puts the industry on the defensive, that the industry is intentionally limiting consumer options to reduce our reliance on fossil fuels, that continuing to invest in fossil fuels is actually more risky and irresponsible, and that all capital decisions and investments are political.

As Collins explained, just as tobacco industry lobbyists prevented regulations and restrictions on smoking, the fossil fuel lobby today is blocking our political system’s ability to act on climate change.

“Just like tobacco, we need to weaken the political clout of the fossil fuel sector, revoke their social license to operate and lobby, to narrow our policy options and help us move forward,” he said. “For us to survive, that is part of the strategy.”

Laura Bentz of Williamstown attended the panel and rally at the Statehouse and sees divestment as a key tactic to addressing the climate crisis. “We’re not going to meet our carbon reduction goals unless we undertake all kinds of change on many, many fronts,” she said. “It’s the right thing to do, to divest. There’s evidence that it’s right financially, not just morally.”

A mother of two, Bentz said she is “absolutely” concerned about the future of climate disruption her children will live to see. “I feel a real urgency,” she said.

Some young people are refusing to sit idly by with their futures at stake. With active campaigns at hundreds of college campuses nationwide, the divestment movement is largely student-led. “The driving energy has come from young people who understand that business as usual can’t continue to operate,” said Collins.

The afternoon session, a rallying call for divestment, featured a lineup of more than a dozen speakers including youth and students, faith leaders, peace activists and climate justice advocates.

“For my whole life, our elected leaders have stood by, ignoring the science and ignoring my generation’s right to a functioning planet,” remarked high schooler Kerry Brock of the Student-Organized Climate Action Network (SOCAN). She spoke on behalf of youth-led climate action groups like SOCAN and the Alliance for Climate Education, groups where students are organizing under the mission of refusing to allow their futures to be destroyed. “We are ready to use our anger as fuel to fight for divestment and for justice,” she said.

Paul Shannon of Massachusetts Peace Action pointed out that fossil fuel exploitation and control is a primary driver of military action. “In the peace movement, if we want to stop war, we cannot stop war until we get off this fossil fuel economy,” he said.

Reverend Jim Antal of the Massachusetts Conference of the United Church of Christ explained that his congregation voted to divest.

“We’re here today to convince the elected leaders of the Commonwealth to do the same,” he said, “to lead the nation, by becoming the first state to declare that it is immoral to allow fossil fuel companies to carry out their business plan, because if they do it will wreak the Earth.”

Journalist and climate justice advocate Wen Stephenson took a bold approach in his remarks. “I’m here today to say a word for the radical,” he said. “The Arctic and the glaciers are melting, the oceans are rising and acidifying. The storms and the droughts are intensifying. Nations are disappearing. People are dying. And the fossil fuel industry, which holds the fate of humanity in its carbon reserves, is doubling down economically and politically. We are faced with an unprecedented situation, a radical situation. Radically threatening, radically unjust. It requires a radical response.”

Divestment is a key element of that radical response, according to keynote speaker Tim DeChristopher. “It’s time we admit that this is a radical movement and we are here to change everything!” he declared.

Divestment, he said, is about undermining the concentration of wealth and power and dismantling structures of privilege that stand in the way of change.

DeChristopher called for the divestment movement to reach out to those fighting for other types of justice and challenging the status quo. “We can’t play a small game anymore. It’s too late for that and that small game hasn’t worked.” To make a wave of change possible and grow the climate movement, he said we need a “big vision of dismantling the interconnected types of oppression that oppress people throughout our society.”

He concluded with a bold warning – “It’s time that people at the top of the power structure get scared of the climate movement, because they know we are working hand in hand with social justice movements around the world that are here to change everything.”