Mass Shootings: The most obvious manifestation of a much larger problem

Mass shootings! The media love them; great for ratings. And once the killer has been identified, there is always the question of what motivated him/her. But mass shootings are becoming a common happening. And rarely is a foreign terrorist involved. It is usually some American nutcake.

Table 1 is a compilation by Mother Jones tracing mass shootings back to 1982. In that period, there have been 903 deaths with 1,353 injured. These shootings get all the headlines. But the Gun Violence site counts 14,769 gun deaths and 28,238 gun injuries in 2018 with an additional 22,000 gun suicides. That means an average of 40 non-suicide gun deaths daily. 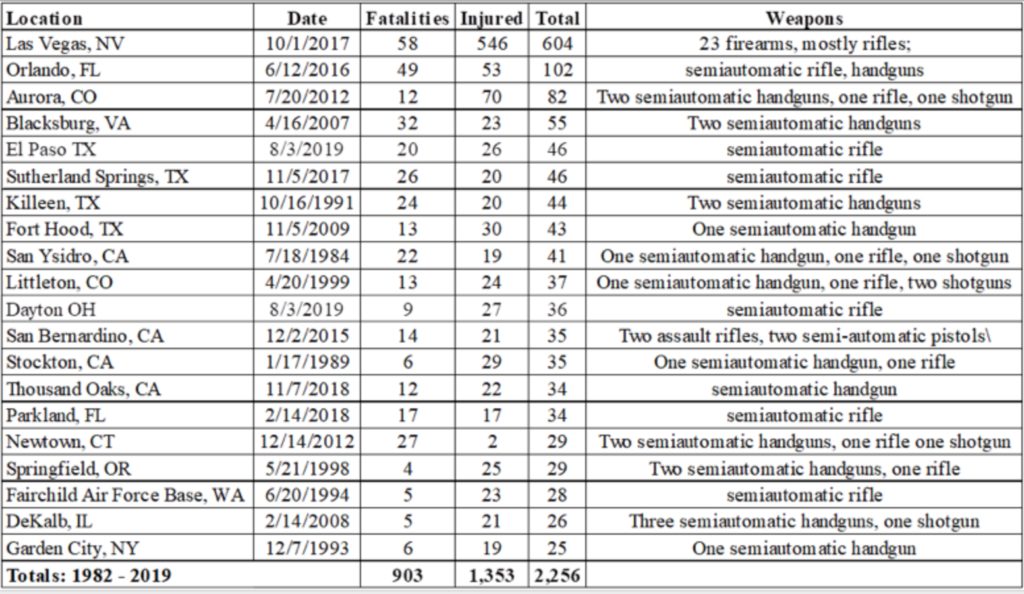 What follows provides some background on the situation with suggestions for next steps.

But the U.S. Second Amendment supporters do not agree. And while I believe the Second Amendment is totally anachronistic and should be eliminated, that will not happen in my lifetime. So what is to be done?

The first thing one has to accept is that corrective actions will take time. With the estimated nearly 400 million guns in the U.S. and most of them unregistered, this will be a major job that will not bear immediate fruit. That point should be obvious. But gun supporters always point to how the first steps taken to control guns would not have kept the last mass shooting from happening.

To start, it is worth asking how we regulate other killers. Experience tells us that banning a good for which there is a U.S. market will always lead to that good being supplied by a criminal element. U.S. experience with prohibition and currently with drugs makes this point. So the Second Amendment supporters are probably right (for the wrong reason). It is probably better not to ban guns.

480,000 Americans die every year from smoking. Cigarettes are legal but taxed heavily, have an age restriction with educational campaigns to spread the word. Gradually the deaths are coming down. The remedy is not perfect but things are getting better.

In an earlier piece, I identified the most important other preventable U.S. killers as alcohol, obesity and motor vehicles. Alcohol consumption is limited by age restrictions on sales and severe penalties for driver-related accidents. There are no restrictions on overeating.

But regulations on motor vehicles are interesting. They are far from perfect – 40,000 died and 4.5 million were severely injured in motor vehicle accidents in 2018. But these regulations might be a good starting point for guns.

Here are the regulations for auto owners/users:

Such regulations seem eminently reasonable for gun owners/users. Now, you might say how would this system be better than the current background check regime?

There is one more extremely important auto regulatory requirement: all cars must be insured. Again, it would seem quite reasonable to require guns to be insured, at least for liabilities. Would the insurance companies be willing to offer such insurance? Of course, they would love the new business. And they have plenty of data to make sound estimates of appropriate fees.

Of course, having to insure guns would add to their costs. Good. Fewer people would want guns. And that would mean fewer gun mishaps.

It would appear to be quite sensible to regulate guns as we regulate autos and their drivers. But let’s consider the arguments against doing it.

Claims that guns are used defensively millions times every year have been widely discredited. Using a gun in self-defense is no more likely to reduce the chance of being injured during a crime than various other forms of protective action. At least one study has found that carrying a firearm significantly increases a person’s risk of being shot in an assault; research published in the American Journal of Public Health reported that, even after adjusting for confounding factors, individuals who were in possession of a gun were about 4.5 times more likely to be shot in an assault than those not in possession.[1]

In light of the ineffective regulation of guns, this piece reviewed how leading preventable killers are regulated. The conclusion was that regulating guns as motor vehicle use is now regulated would be a marked improvement. I close with the following story:

Recently, a Florida man was arrested and charged with aggravated assault on his girlfriend. That arrest was the third domestic violence incident the man has been involved in during just the last 18 months and the fourth time during that period police have been called because of violent or threatening behavior. He also allegedly threatened to kill another driver during a road rage incident late last summer. Years earlier, the man was arrested for assaulting a police officer and was the subject of a temporary restraining order for another domestic violence incident. This man did one other thing: he shot and killed an unarmed teenager named Trayvon Martin.

The system is broken.