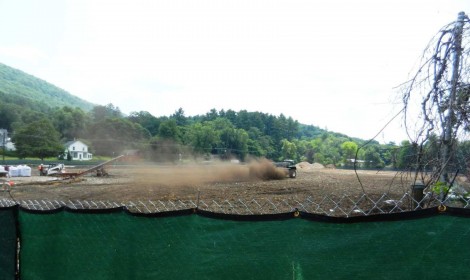 David Scribner
A tractor pulling a disc kicks up a cloud of dust as it applies BioTech Restoration's bioremediation materials last summer to the former New England Log Homes site at 100 Bridge Street in Great Barrington, in the first stage of a planned removal of dioxins from the 8-acre site.

Great Barrington — A $40 million development project envisioned for what is still a toxic waste site on Bridge Street had yet another setback last month when the state Department of Environmental Protection (MassDEP) told the Community Development Corporation of South Berkshire (CDC) that it would not allow “experimental bioremediation” efforts to continue without “empirical evidence” that they actually work.

In her May 15 letter to CDC Executive Director Timothy Geller, Eva V. Tor, MassDEP’s Deputy Regional Director of the Bureau of Waste Site Cleanup, said that all the data reviewed by her agency thus far is insufficient for the cleanup to continue on the brownfield site. MassDEP now requires “additional data” for the soil treatment to continue, citing “future risk to public health,” as a concern, “particularly given the proximity of the site to sensitive populations and current uncertainty regarding the effectiveness of this remediation method.” 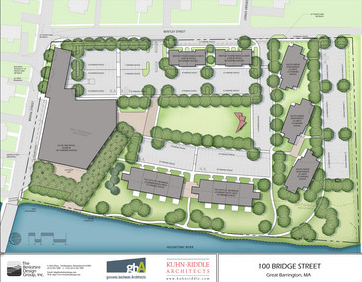 A rendering of the 100 Bridge Street project, with the Berkshire Co-op Market as an anchor tenant.

MassDEP is so concerned about the situation that Monday (June 8), agency representatives will meet privately with Rep. William “Smitty” Pignatelli (D-Lenox) and Sen. Benjamin Downing (D-Pittsfield), Pignatelli told The Edge, to debrief the two delegates and “bring Ben and I up to speed about what’s really going on [at the site].” Pignatelli added that MassDEP “raised the red flag with us,” expressing concern about recent media reports in which CDC’s Geller was quoted as saying that the bioremediation was moving forward.

“We need to strategize the next steps,” Pignatellli said, “and how much more money it will cost, and where the money will come from.”

Geller did not respond to repeated attempts to interview him.

The CDC has, for 12 years, been trying to develop the centrally located 8-acre site that sits next to the Housatonic River. Since the 19th century, the site has been home to several industries, culminating with the now-defunct New England Log Homes, which left a toxic cocktail of chlorinated compounds — dioxins and PCPs — in the soil, with leaking drums of the chemicals around the property, making the site difficult to develop. Log Homes went belly up in 1994.

The CDC bought the site from TD North Bank for $1 and began planning for site remediation and a development that may still include an expanded Berkshire Co-op Market as an anchor, surrounded by retail and office space, a restored park-like area along the river, and both market and affordable housing. The CDC and the Co-op have not yet signed contracts. 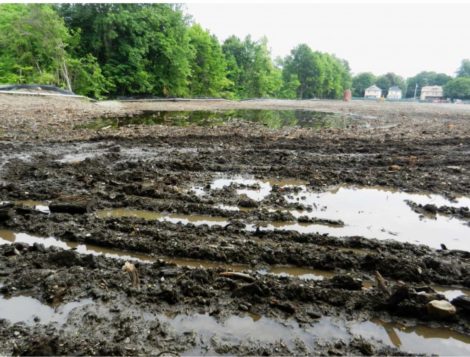 Bioremediation efforts, begun in June of last year by Biotech Restorations of North Carolina, have been bedeviled from the get-go, after unusually heavy rains last summer flooded the site, setting off a series of non-compliance notices from MassDEP.

The process, co-created by Biotech’s co-founder and president, Christopher Young, involves treating the soil’s own bacteria — using standard farming practices and Biotech’s own concoction — so that they will consume the contaminants, self-cleaning the site. Biotech has reduced pesticide levels at other sites in the United States, and has neutralized PCBs both in the lab and on a 5-acre property in California, among other cleanups.

The Log Homes site, however, is the first real-world test for dioxins. Soil from the site was bench-tested in the lab; the process reduced dioxin levels to almost nothing in 10 weeks, better than the 20 nanograms per kilogram goal mandated by MassDEP, according to Young.

But last summer’s flooding interfered with the process. Making matters worse, when MassDEP ordered the work stopped, the soil lay un-cultivated, raising ph levels which created a strong odor that initiated numerous complaints from neighbors near the site, and fears among some that the process may be a health hazard. Young says the process, and the formula Biotech applies and works into the soil, is harmless, and MassDEP agreed to its use, in part, based on toxicity studies conducted on water fleas and fathead minnows, used for their high susceptibility to all organic pollutants, according to Young. The formula also passed review by CDC’s licensed site professional, brownfields restoration specialist Ransom Consulting Engineers and Scientists, who, as Geller once pointed out, had their license “on the line.” 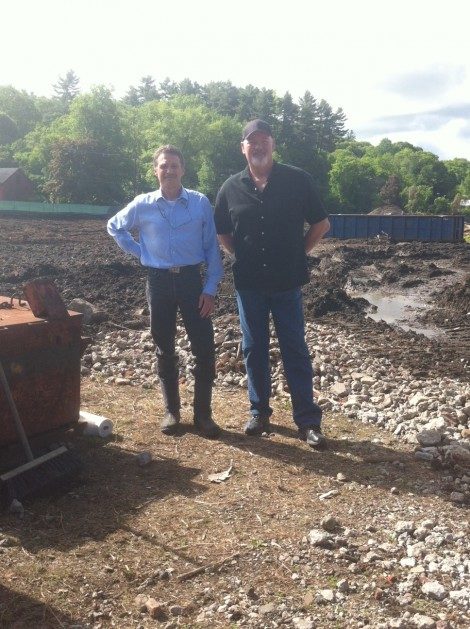 From his office in North Carolina, Young told The Edge that it is “not uncommon” for environmental regulators to step in when the process gets complicated. “This is normal regulatory speak,” he said, “that the six [soil] samples pulled in September don’t represent a sufficient body of evidence. It’s a totally understandable position.”

Those six soil samples, Young said, showed that “indications were good that we had significant reductions” in contamination levels, with some reductions reaching 70 percent. MassDEP said that indeed, “dioxin/furan concentrations decreased in three of the six samples and increased or stayed the same in the other three…” Another comparison test indicated “little variation…between baseline and interim samples.”

Young said that pulling samples is expensive: $1,000 per sample using EPA Method 1613. Adding a new, less expensive method was proposed. MassDEP, however, says the new method, an Immuno Assay, can only be used to “augment” the standard method.

Young says that Ransom will pull 20 samples, five of which will compare the two methods on the same soil sample.

“We want to know where we are in the remediation process,” Young said. “We’re not looking for a definitive result. Tests are a point on a road map to tell us where to go.” MassDEP, he added, isn’t sure if the Immuno Assay will “give us reliable data.”

“Once again we find ourselves losing valuable [soil] treatment time because the regulatory folks can’t make a determination.” Biotech’s process can only be undertaken when the soil is workable and the temperatures relatively warm. 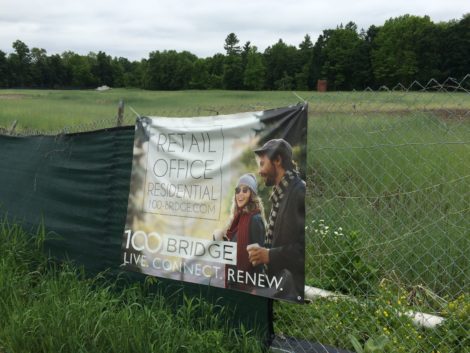 Bioremediation was seen as a less expensive and exciting alternative to the traditional approach of capping, or sealing off the soil, at the site. According to Biotech’s website, capping costs upward of $148 per cubic yard of soil. Because PCPs are more difficult to break down than the PCBs contaminating Housatonic River sediment, banks and flood plains, the hope was that the Log Homes site would provide evidence that this less disruptive and more economical approach could be used wipe up the PCB mess left by Pittsfield’s General Electric company.

Young says that MassDEP has, for some reason, pulled the Environmental Protection Agency (EPA) into the mix, and said he wasn’t sure why.

EPA spokesman Jim Murphy could not be reached to confirm the EPA’s involvement. Likewise, MassDEP did not return calls.

The CDC got a MassDevelopment Brownfields Redevelopment Fund grant to pay Biotech’s roughly $2 million price tag. Young said that the CDC made a partial payment for the initial work, but would not say how much. “The majority,” he said, “will be [paid] at the end of the project.”

Biotech Restoration’s website says the company “currently has more than $750 million in new business in the development pipeline.” 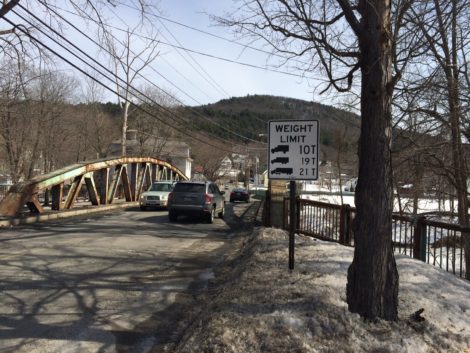 The Bridge Street bridge for whose repair $2 million had been secured in anticipation of the 100 Bridge Street development. Photo: Heather Bellow

The CDC’s plans for the site, known as 100 Bridge, have generated excitement in a town looking to increase its tax base, and to see a brownfield transformed into a central hub of activity on Bridge Street, which is seeing rapid progress, the most recent of which is a 95-room boutique hotel proposed for the former Searles High School building.

Tax revenues to the town from 100 Bridge were estimated by Geller to be in the range of $400,000 per year, and the project was considered important enough that the town voted to allocate a total of $500,000 in Community Preservation Act (CPA) funds to it: $200,000 for affordable housing, and $300,000 for open space on the site.

When informed of the halt to the Log Homes cleanup, and the possible delay in the 100 Bridge Street project, Karen Smith, chairman of the Community Preservation Committee that had recommended the CPA funding, noted that the setback might not necessarily jeopardize the allocations approved at the Annual Town Meeting, and that the funds could be preserved until such time as the 100 Bridge Street project gets under way. 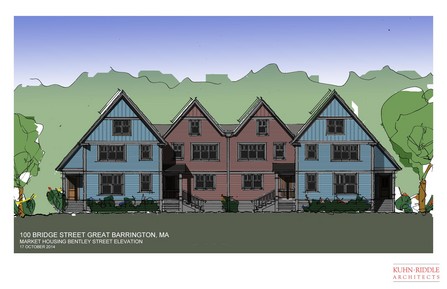 A rendering of the housing units that are a component of the 100 Bridge Street plan that includes a park and riverfront walkway.

The town was so enthusiastic about developing the Log Homes site that it formed a coalition with local businesses to ask the state for $2.4 million to rehabilitate the 65-year-old Bridge Street bridge, the weight limits of which are currently insufficient to handle an increase of large trucks and traffic that would be generated by 100 Bridge. The state said no, but after some tugging of political strings by Rep. Pignatelli and Sen. Downing, the state agreed to fix the bridge with the money it had set aside to paint the brown bridge on State Road.

CDC developer Benchmark Development did not respond to repeated attempts to contact them to confirm or deny reports that they had recently left the 100 Bridge project.

“It is a complicated site, with a complicated pollutant,” Young said. “Dioxins are the most complex and difficult pollutant to destroy. Had we not had that 60 day hiccup of rain and odor at the front of the process, I think we’d be done by now.”

Leave it to the hand-wringers to kill the golden goose. Fact is Great Barrington is blessed with a grandfathered-in race track, and warm-weather horse-racing combined with a year-r...

— Joe Wheaton
Read next: Berkshire real estate transactions: May 17 through 23