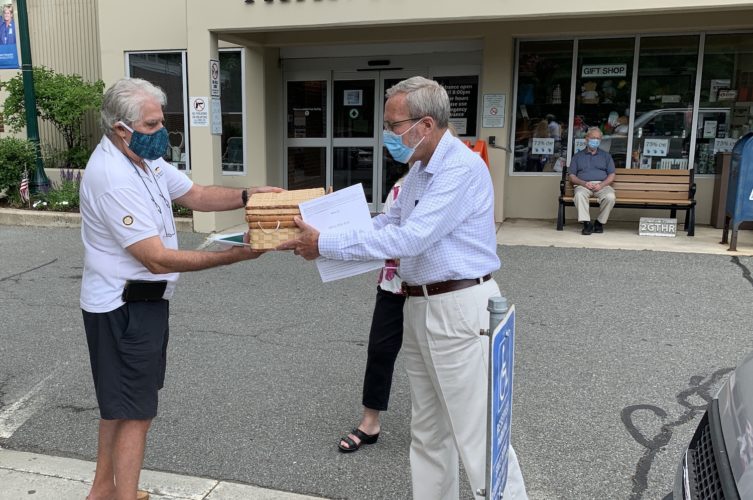 Great Barrington — They’ve become as common as the air we breathe. It seems almost everyone in an enclosed public place is wearing face coverings during the COVID-19 pandemic. But only a few weeks ago they were still in short supply.

He is a member of Puerto Vallarta Sur, the local rotary club in that city. One member started an afterschool program for disadvantaged youth that included a sewing school. Several women taught sewing to the children, contracted with outside organizations and then sold some of the garments they had produced.

“When the pandemic hit, only a couple of months ago, masks were in extremely short supply,” Stanley explained in a brief ceremony outside Fairview Hospital. “The school offered to make masks, so I asked if they could make some and send them to the Great Barrington area.”

See video below of Richard Stanley, Betsy Andrus and Steve Bannon as Fairview Hospital and the Southern Berkshire Chamber of Commerce accept the gift of masks on Friday afternoon:

The colorful masks are now in the hands of the hospital and the chamber, which accepted them in front of the hospital’s entrance on West Street in a brief media availability Friday afternoon.

The masks will be a part of kits the two organizations will prepare for local businesses as they prepare to reopen after the weeks-long shutdown per order of Gov. Charlie Baker. The kits will also contain hand sanitizer, posters and other goodies that businesses will need in order to reopen safely.

“The hospital came with a plan to create a reopening packet because the [state] guidelines are kind of loose,” said Andrus.

“We’re putting together these packages to give businesses to show support for them,” Fairview spokesperson Lauren Smith added.

Using one of his own businesses as an example, Stanley said tentative plans call for the reopening of the Triplex Cinema Monday, June 29. The cinema closed in mid-March after Baker’s order.

“We’ve been working on reopening for weeks, especially the seating aspect of it,” Stanley explained. “We’re going to want people to wear masks from the minute they come into the lobby.”

The idea for retail businesses is that most will require masks of customers for the foreseeable future. If a customer does not have a mask, businesses can offer them one because they will now have a supply.

“Not everybody will have a mask,” Stanley explained. “If you don’t have one, we’ve got one for you.”

“We want the community to have a consistent sense of health and safety,” Smith said of the masks. “We have to normalize it. Right now you’re going to see people who want to be outliers, who want to be free [and not wear a mask] and they’re putting everyone else at risk.”

Among the rotary’s many missions is to “promote peace and fight disease” and its motto is “service above self” Bannon said, so the donation of the masks fits right in: “We’re very happy with this donation because it benefits both ways.”

“This is an incredible example of the worst of times can become the best of times,” said Stanley. Andrus said the kits will be distributed to area businesses in the next few days and weeks. Click here to see Baker’s reopening plan announced on May 18, and here to see what we know about more recently announced details.