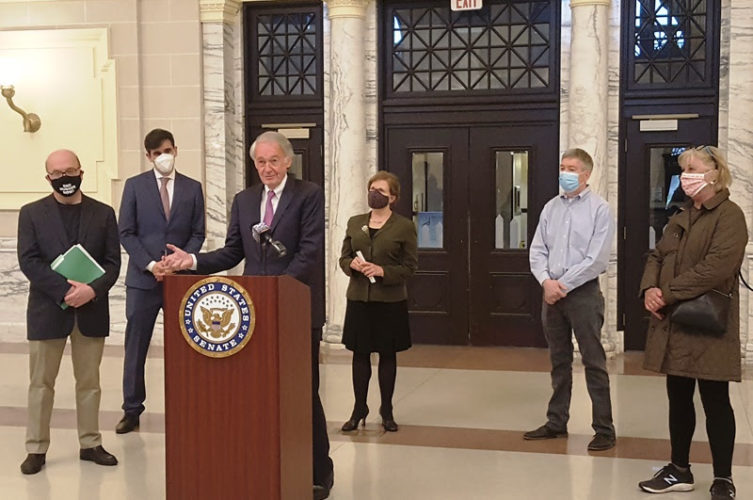 WORCESTER — Senators Ed Markey and Elizabeth Warren and Rep. Jim McGovern yesterday announced the reintroduction of the Building Rail Across Intercity Networks To Ride Around Interior of the Nation (BRAIN TRAIN) Act.

This Senate bill would authorize $5 billion annually, for a total of $25 billion over five years, to be spent in high-performance passenger rail projects that offer service to unconnected and under-connected communities across the country — such as those in central and western Massachusetts, Markey’s office said in a written statement.

Markey said passenger rail is an essential and popular alternative to highways or air travel. Studies consistently show that expanding passenger rail service will improve mobility, enhance safety, promote economic development, generate new jobs, and protect the environment. Yet despite these benefits, Congress has not dedicated the resources required to build a passenger rail network worthy of the 21st century, he said.

“Passenger rail is an essential ingredient for a healthy economy, a healthy environment, and a healthy workforce,” added Markey. “That’s why President Biden’s American Jobs Plan rightfully calls for a massive expansion of rail across the United States … We are reintroducing the BRAIN TRAIN Act to provide the focus and funding that will ensure every part of our Commonwealth is connected to the larger national rail network Congress is poised to create.”

Warren said she was “glad to join Senator Markey and Congressman McGovern in reintroducing the BRAIN TRAIN Act which would help fund critical infrastructure projects here in Massachusetts and across the country.”

“We have a once-in-a-generation chance to cut through the gridlock in Washington and build a more thoughtful, accessible, and inclusive transportation network that empowers communities and passengers throughout Central and Western Massachusetts to have a say in shaping the future of this country,” said McGovern.

The text of the proposed legislation can be found here. Key components are bulleted below:

“The Western Mass Rail Coalition strongly supports Senator Markey’s bill because investment in regional rail between smaller American cities and major urban centers will benefit communities like ours across the United States,” said the coalition.

“The Train Campaign’s supporters in Massachusetts, Connecticut, and New York have been waiting for leadership from Washington,” added Great Barrington resident Karen Christensen, founder of the Train Campaign, the regional rail advocacy organization. “The BRAIN TRAIN bill introduced by Sen. Markey is just the ticket! The bill promotes interstate and regional rail, and focuses on reducing climate emissions, as well. This initiative will help us build a healthy, equitable, truly 21st–century, rural-urban relationship.”

Markey first introduced the legislation a year ago with Rep. Richard Neal. The reintroduction of the legislation comes as Congress is considering President Biden’s American Jobs Plan, which includes $85 billion to modernize public transit. Markey said his proposal would build on Biden’s bill and work to ensure a more accessible rail system.

The Great Barrington-based Train Campaign supports rail initiatives and proposals, including the East-West Rail Study, the Pownal line, the Berkshire Flyer, and the Housatonic Line.