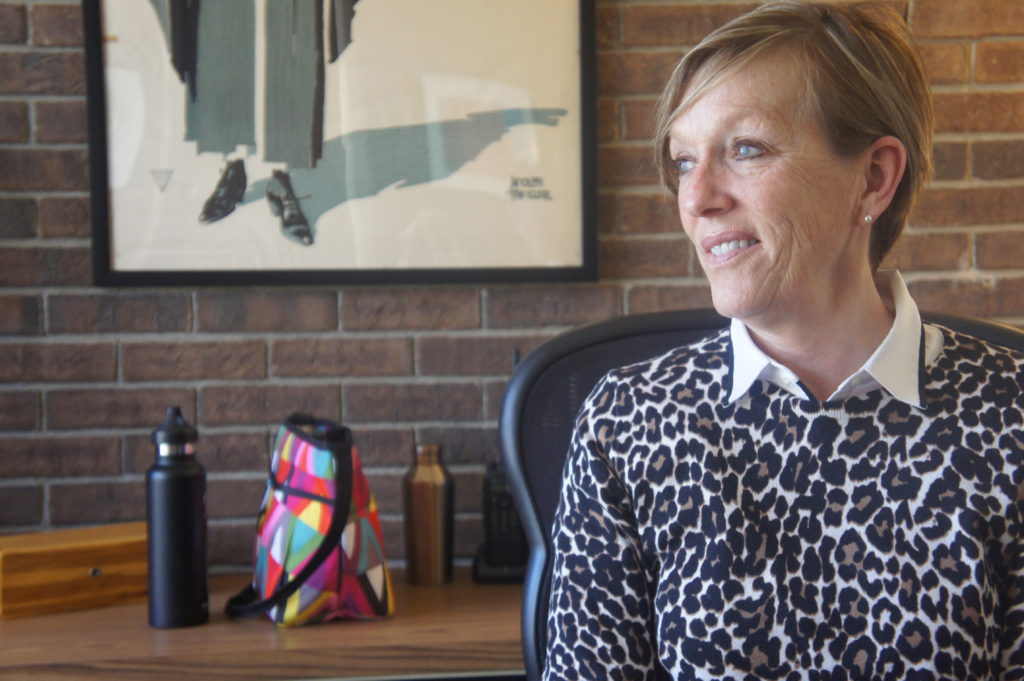 Hannah Barrett
Monument Mountain Regional High School Principal Marianne Young in her office. She will be stepping down this summer after 16 years leading the school's faculty and students.

Great Barrington — The timing is auspicious for Marianne Young, principal of Monument Mountain Regional High School, who has announced she will retire from her post at the end of the school year. Young’s departure will come at the close of her 16th year leading the faculty, staff and students atop the infamous grassy hill in Great Barrington. From an office with panoramic views of the mountain for which the building was named, Young cited the timing of her departure as being for “no big reason [in particular]” but fittingly coinciding with the school’s celebration of the 50th graduating class. “There is a moment here,” Young explained, “for MMRHS to take the 50th commencement and head into the next era of the school.” After a career spanning 32 years, both as an educator and administrator in Vermont and Massachusetts, Young sees this historic moment as an opportunity for new beginnings. 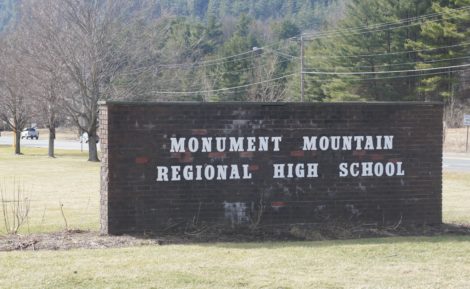 Young, who joined the Monument Mountain community in July 1999, served as principal for two periods of eight years each that were interrupted — between July 2007 and August 2009 — by a two-year stint as Superintendent of the Lenox Public Schools, an experience she acknowledges as “really positive” albeit brief. Young, who is 60, points to both the opportunity to help influence and to learn from the students at Monument – “young people who are in such an impactful time of their lives”– as the constant that has brought her back each day over the course of her tenure. She spoke candidly, albeit nonspecifically, of the challenges of her tenure, namely staying true to the school’s mission in the face of “varied outside demands and needs” of the community at large. She did speak to the “growing swell of expectations on public education” coupled with the needs of families and community members and how this often posed the challenge of “how to both respect and meet the needs of those outside [the building] while remaining true to those inside [the building].”

The answer admittedly lies in balance. Young recalled her first faculty meeting in 1999, and feeling so nervous. “How am I going to do this?” she thought. And then she met the faculty. She describes her colleagues as a “strong faculty, [of] smart people, talented people with ideas” as complementing her tenure as principal. She quickly realized that the journey was not about her, rather about partnering with the faculty and journeying together. “If I stayed with them” she explained, “asked questions, listened to their answers and built on their ideas…[I knew] we’d be OK.” 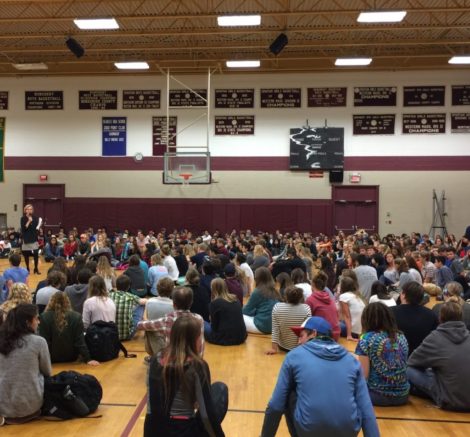 It is this spirit of collaboration with her peers that defined much of Young’s approach with the student body. Young gave voice to her model — one which placed emphasis on holding a foundation for the students while encouraging them to find their own way — as a place to start. In making it her goal to “give students space to create their own experience” she was at times met with misunderstanding. This often unconventional approach, one that Young admits can make some people very uncomfortable, “gave [the students at Monument] room to make it their school.” Young points to a student body that is largely “present…[one that] values the opportunity they’ve been given which means [for the most part they] are not chafing against it.” While she is quick to point out this approach was in no way free from challenges and tough decisions, in the end it created a sense of community, one defined by shared work and direction and to “be in it together” — no matter the issues.

As to what lies ahead, Young admits to being “a little tired,” something she carefully considered as one of her fears was “staying [in the principalship] too long.” She is a grandmother now and looks forward to spending time with her growing family; professionally she is looking ahead to the myriad opportunities that await her if she chooses to become involved in education from yet a different angle. She alluded to mentoring both principals and aspiring principals as possibilities on the horizon, but for the time being nothing is planned. “I will miss the people, for sure, as I did when I was in Lenox.” However, hands down, “a direct connection to a student’s story [and] seeing individual student stories unfold” is what she will miss most. 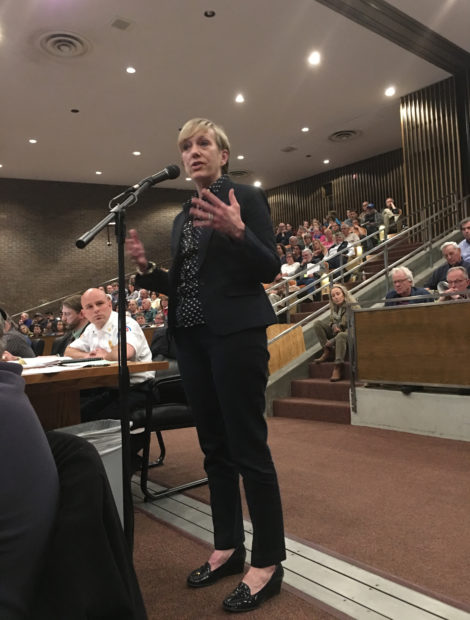 “Leading schools today takes a lot of courage,” Young said while gazing at the view unfolding beyond her window. She spoke broadly about the challenges facing today’s administrators, brought about in no small part by the “very public” situations occurring in today’s high schools that often leave principals “in the spotlight.” Young went on to address the fact that in public education, lots of time is spent on the management of kids. Movement between classes, movement to lunch, to assemblies. “It can be challenging” Young admits, but “in management we lose sight of what will bring kids to life. Sometimes, as a result, it gets noisy and messy.”

When asked about her eventual successor, Berkshire Hills Superintendent, Peter Dillon, was rife with praise for Young’s tenure, citing her “exceptional interpersonal skills” and a keen ability to “bring people together, really listen and build excitement about learning and work.” In their eight years working together, Dillon pointed to several moments that helped to shape the impact Young has made at MMRHS. She led a remarkable self-study that brought faculty, staff, parents and community members together to carefully reflect on Monument’s strengths and opportunities for growth. She created room for students and teachers to be innovative including Project Sprout, the independent project, and the Farm to School Stand; her collaboration with Jacob’s Pillow, the Fall Festival of Shakespeare, Kripalu, the Railroad Street Youth Project and dozens of other organizations allowed her understand the pulse of the community. She worked hard to make a potentially cumbersome evaluation process thoughtful for teachers through her commitment to spending time in classes and sharing meaningful feedback; she even went so far as to solve a scheduling problem by teaching a class which, by stepping back into the role of teacher, allowed her the opportunity to grow as an administrator. Outside of the building, Young has been a powerful voice on the MIAA board and as part of the Berkshire County Principals group. She has provided support to colleagues in leadership roles and been a well-respected professor at MCLA’s leadership program. 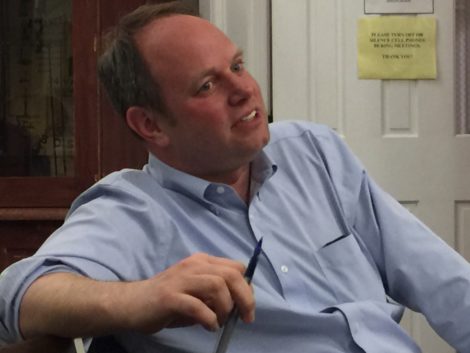 In short, according to Dillon, “the next principal will have big shoes to fill. Challenges will include sustaining our positive momentum, reexamining resource allocation, keeping our approach to learning current and progressive, and perhaps exploring additional opportunities for interdisciplinary learning and deeper connections outside of school. The search for Young’s successor will start with the position being posted this week, the formation of a 30-member search committee and the review of candidates followed by interviews and selection.” He hopes to have a new principal in place by July 1, with an announcement as soon as May depending on how the search process unfolds.

Dillon’s final comments were succinct: “Marianne has stepped into challenging issues including heated conversations about drug and substance use and abuse, race, gender identity and equity. She’s made room for her students, colleagues, parents and community to discuss, reflect and grow.” When asked if she had any regrets in her time at Monument, she was plaintive before answering. “No” she said. “There are a couple moments if I could do them over I would. But no regrets.” She instead focused on feeling fortunate: for having been welcomed to the school, to the community, and for the experience being “a good fit” one she does not plan to outgrow between now and June when she, along with the 50th anniversary Class of 2017, will commence their next chapters.