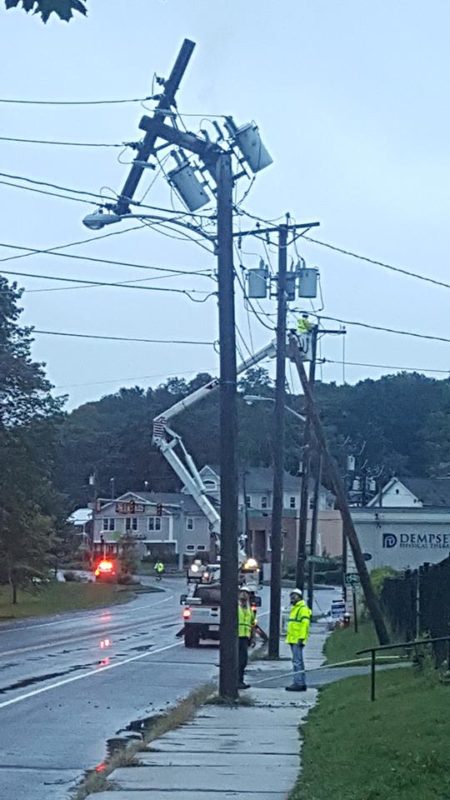 Editor’s note: This article has been updated with new information from Chief Burger.

Great Barrington — A transformer on a utility pole on Main Street caught fire this morning, causing a power outage and traffic headaches for the thousands who commute through downtown on a typical weekday.

Great Barrington fire Chief Charlie Burger announced on the department’s Facebook page at 6:45 a.m. that the northern portion of Main Street would be closed until further notice as linesmen from National Grid worked to repair the pole and the transformer.

A photo captured and posted on social media by Mill River resident Richard John Ball showed a utility pole on the west side of Main Street partially severed near the top. The pole is near Dempsey Physical Therapy and John B. Hull, just to the north of Cumberland Farms.

Traffic was being rerouted from State Road to East Street and Bridge Street, where motorists reported vehicles were moving very slowly, if at all. The bottleneck on East Street was surely made worse by the fact that the Bridge Street bridge is currently under repair and has been reduced to one lane with a traffic light.

At 8:16 a.m., Burger sent out an email blast that read, “Main Street between State Road and Cottage Street is closed for the next few hours while National Grid makes emergency repairs.” 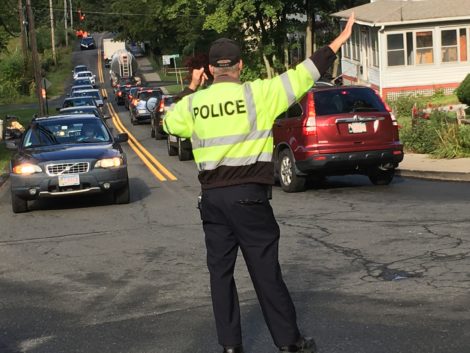 According to National Grid’s online power outage map, the outage began at 6:05 a.m. and, as of 9:30 a.m., was still affecting 17 customers. The company had estimated service would not be fully restored by 2 p.m.

In an interview at about 1:30 p.m., Burger said the pole has been replaced but that National Grid was still working to restore power to the 17 affected customers. Shortly after our conversation, the National Grid outage map said power had been fully restored.

Burger said the transformer did not ignite first, as he initially thought. Rather, it appears that the pole itself caught fire first.

“The pole itself actually burned through, which caused the top of pole and transformer to fall off,” Burger explained, adding that he guesses an electrical short must have been the cause.

When firefighters arrived at about 6:20, the pole was still burning. The fire department, however, can do little firefighting until National Grid cuts the power. Burger said firefighters promptly established a perimeter and began detouring traffic.

The detouring is not as easy as it might seem because numerous tractor trailers and other large vehicles had to be rerouted onto East and Bridge streets. Those vehicles cannot make the wide turn from one of those narrow streets to the other without stopping traffic in both directions, adding to the congestion caused by the one-lane Bridge Street bridge and to the complexity of the detour itself.

This article will be updated as more information becomes available.