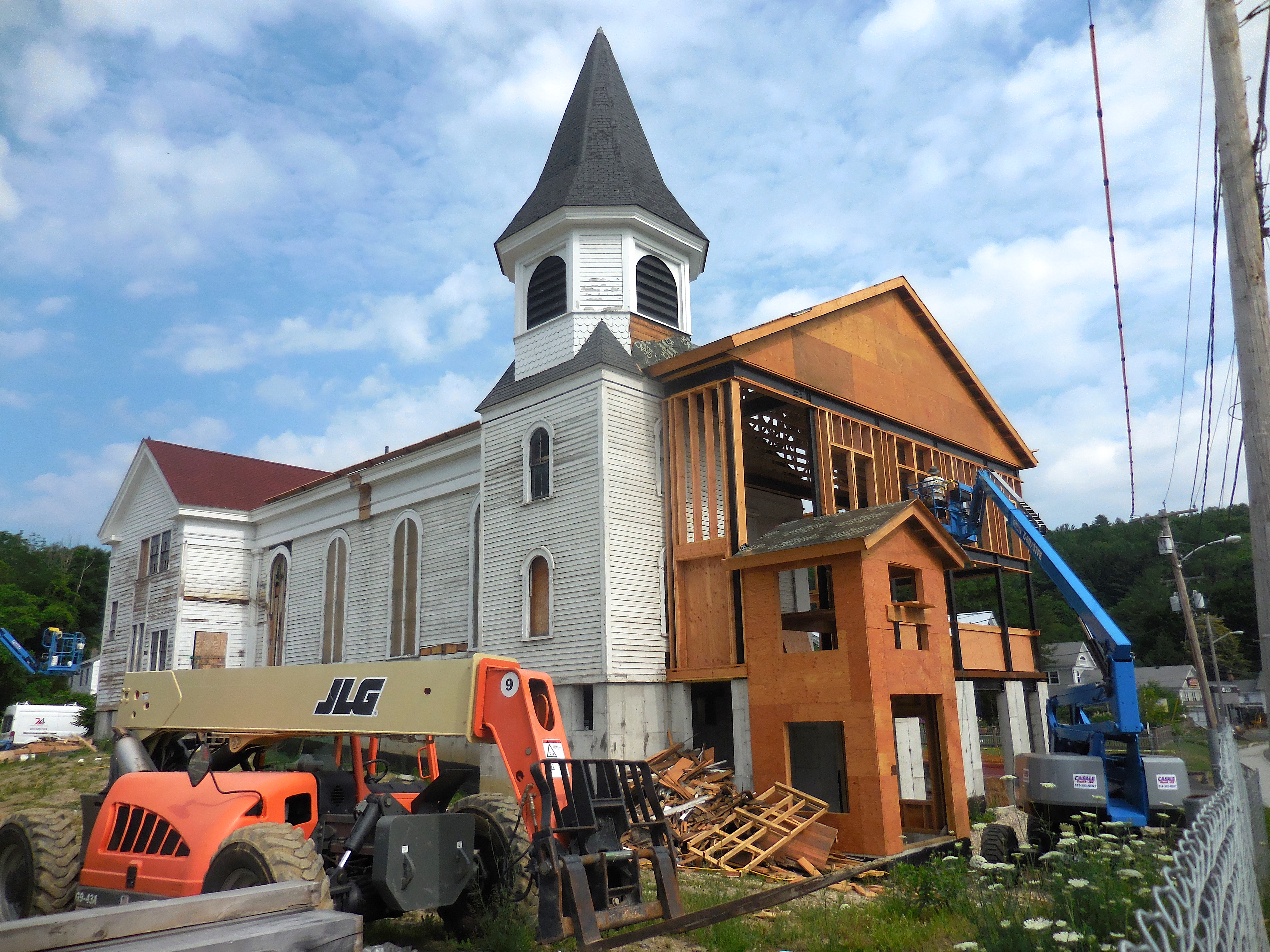 Editor’s note: this article has been changed to reflect the correct time of Highminded’s July 9 community outreach meeting. It is at 4 p.m., not 9 a.m.

Great Barrington —Even after it’s finished and brought down to earth, the so-called “flying church” could be flying even higher than expected.

That’s because the former United Methodist Church, which over the last three years has been undergoing an extensive renovation and repurposing, will likely count among its new tenants a retail recreational marijuana store.

Highminded LLC will join three other applicants in Great Barrington looking to open so-called adult-use cannabis stores aiming to sell weed and associated edibles. As their designation suggests, they will be open only to customers 21 years of age and older.

It’s hard to imagine what a recreational pot shop will look like since none of them has officially opened for business yet, even though adult-use was legalized in Massachusetts through a 2016 ballot initiative.

Theoretically, the shops can be opened this month, but as of yesterday, only one — an existing medical marijuana dispensary in the Worcester County town of Leicester — had been officially been awarded a license for adult-use.

On the surface, Highminded seems like a traditional adult-use cannabis company. It is a new limited liability corporation formed last month by Alexander Farnsworth, his partner Adam Lippes and Farnsworth’s older brother Brayden.

Click here to see the company’s filing with the secretary of state. Highminded will be a retail outlet only, though company officials say they are in discussions with potential “cultivation partners.”

But unlike other recreational marijuana stores, Highminded is attempting to carve out a market niche. In a news release announcing its intention to open a store in Great Barrington, Highminded says it wants to be “a destination of discovery with a playful intellect and an educational experience for adult audiences.”

While acknowledging that Highminded will not be a medical marijuana dispensary (medical marijuana was legalized in Massachusetts in 2012 through the same ballot initiative process), Farnsworth nonetheless says his “recreational product range will include strains associated with the treatment of pain, insomnia, and anxiety.”

“There are ways it can be ingested and used for targeted symptoms to get targeted results,” Farnsworth, Highminded’s managing director, said in an Edge interview. “There are certain strains, for example, that are best for sleeping and for anxiety.”

Lippes, an internationally known luxury fashion designer, and Farnsworth, founder of the social media consulting firm Studio AF Inc., say they’re looking forward to strengthening their roots in the Berkshires community. They own a home in Monterey and currently split their time between the Berkshires and New York City.

Brayden Farnsworth will manage operations and oversee compliance and product development. He has a degree in biochemistry from the University of Utah and experience in the retail recreational sector from his days in Portland, Oregon, which also legalized adult use after a 2015 ballot initiative.

Highminded, which plans to hire 12 additional full-time local staff, has also drafted a host agreement with the town of Great Barrington that includes the mandated annual $10,000 donation to a nonprofit of its choice.

That gift will go to the Railroad Street Youth Project, which will also receive an additional 1 percent of net sales to fund a campaign against adolescent substance usage and develop educational materials for parents and caregivers. State law allows municipalities to add 3 percentage points to the existing state sales tax of 6.25 percent, resulting in considerable revenues to the town.

As required by state law, Highminded will hold a community outreach meeting to brief members of the public on the proposal. That meeting is scheduled for Monday, July 9, at 4 p.m. at the Fairfield Inn and Suites on Stockbridge Road.

Farnsworth said Highminded will also make an appearance that evening at the meeting of the selectboard at Town Hall. At that time, Farnsworth hopes to have a signed host agreement, Farnsworth said.

Highminded joins three other proposed retail outlets in Great Barrington. Theory Wellness on Stockbridge Road opened its doors last year as a medical marijuana dispensary, but will also offer recreational after its license is approved. As required by law, Theory held its community outreach forum last month, also at the Fairfield Inn.

Two brothers from Connecticut, Brian Vincent and Andy Vincent, are looking to establish a retail outlet at 82 Railroad St., while another fledgling company, Calyx Berkshire Dispensary, is looking to open its first recreational store in downtown Great Barrington in the former Joe Dagget storefront at 307 Main St.

Next door in Sheffield, a pair of businessmen including Berkshire Mountain Distillers owner Chris Weld, has started construction on a combination cultivation and retail cannabis facility on Route 7 at the site of the former Shea’s Pine Tree Inn.

Asked whether he thought the market in southern Berkshire County could support that many outlets, Farnsworth said he was not sure it could, but the number of current applicants in South County will likely not be the same as the number of licenses actually awarded by the state.

“I think the state will weed some people out,” Farnsworth predicted, apparently with no pun intended.

As for the flying church itself, so-called because of how the structure has been elevated with a higher foundation, construction is proceeding nicely, said developer Paul Joffe.

There will also be a stand-alone food kiosk — perhaps a gazebo — near the intersection of Main and Rosseter. Highminded is interested in a space on the ground floor in the back. The spaces will be available for rent by late fall.

It’s been a long saga for the flying church and Joffe, who fell ill with Lyme disease last year, resulting in a halt in construction for almost a year while he healed. Some observers wondered whether he had simply run out of money — a charge he has denied.

“I was out for a year,” Joffe said in an interview. “I was in bed and couldn’t move for half that time. I wasn’t sure when I could continue.”

But Joffe is thrilled now that the end is in sight. He praised his contractors and town officials, whom he said had been encouraging. He also wanted to thank residents and passersby for their support.

Joffe bought the land and structures from the church in 2013 for $425,000. Total project costs are not yet known, Joffe said, though he told The Edge in 2015 he expected to spend $1.2 million when all was said and done.

In order to install a new foundation and create more space in the basement, Joffe had the 1845 wooden structure – Great Barrington’s oldest church – raised 6 feet, 9 inches in late 2015, with the expectation that the reconstruction would be completed in 2017. Earlier, he had demolished the parsonage. But Joffe’s illness delayed the completion of the project until this later year.