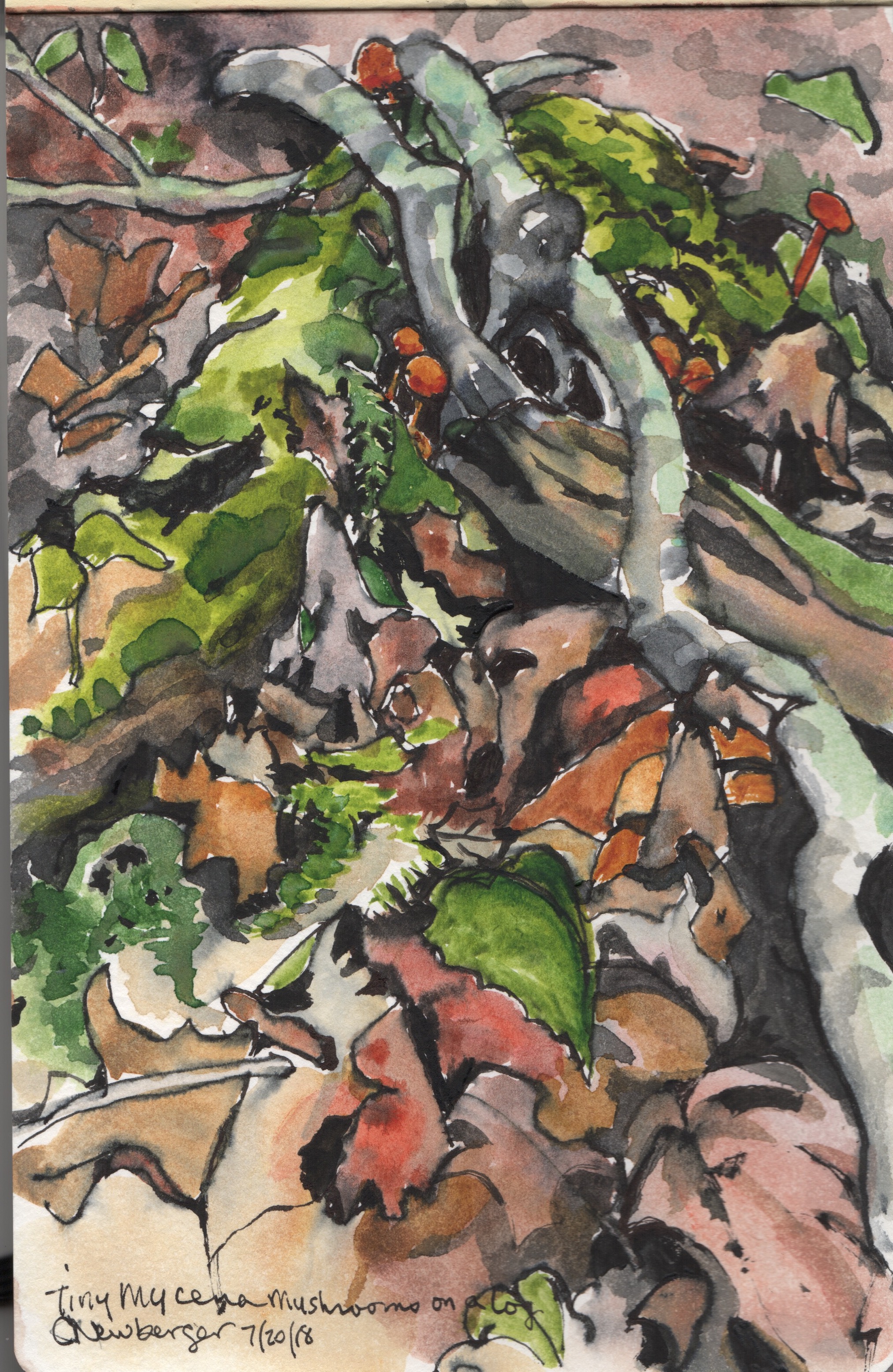 Leaves and Mushrooms on a log. Painting by Careolyn Newberger

Every so often now as I walk through the forest, I come to a bright red leaf on the ground.  When I look up into the canopy, the leaves are green, brightly shining in the sun.

Why have these few leaves chosen to redden and fall? I know, I know, autumn is in the air; the nights are cooler, the days shorter. But why cash it in so soon when these leaves brethren are still frolicking on high, and the woods are still busily producing mushrooms and even late summer flowers?

Sometimes I mistake a flash of red for a chanterelle mushroom, only to discover that it’s a leaf, prematurely red. Cruel fate!

And yet, I can relate to these leaves. Summer is such a busy time of chlorophyll making, tree feeding, rain funneling and root shading, not to mention fending off birds and bugs, winds and scorching sun. It’s not easy being green.

I’m feeling a little tired, too. In a world of inequalities and injustices it is the height of self-indulgence to say that I am tired after a summer of concerts, plays, friendships made and renewed, painting, writing, and walking in the woods with my dog, Lily. This is a fortunate human’s equivalent of making chlorophyll.

And yet, the coming to rest of those red leaves on the forest floor is so profound. No one disturbs them. They are not edible, not nest material, just themselves lying quietly on the ground.

In winter they will be covered in snow. They will ever so slowly fade and join their ancestors on and in the leafy, loamy forest floor.

Two nights ago, the Boston Symphony at Tanglewood performed Mahler’s third symphony, a large, rambling, ambitious work by a young composer who had recently lost his sister and mother, suffered poor health, and whose intense love of nature offered him meaning and comfort. His aim was to encompass all of human emotion in his symphonies, and indeed he did in this monumental one and one half hour work.

Some parts of this work were so searingly, ecstatically beautiful that it was hard to contain them in this finite human mind and body.  I’m thinking especially of the “Bimm, bamm” chorus of angelic child and adult voices and chimes in the fifth movement, and the plaintive, lonely, extended post-horn solo at the beginning of the third movement coming from a distance outside the concert hall.

It is no secret that this trumpet player has suffered a great tragedy, the loss of a son in the full promise of his young adult life. I could hear his sorrow in the deep plaintive lines of his simple, sublime solo. I wept as I heard them and I’m weeping now as I write, for Mahler and his shortened and turbulent life, which later included the loss of his own child, for the trumpet player enduring his unspeakable loss, and for all the sadnesses that remain curled up in little balls within me, and that unfurl from time to time when I happen on a red leaf in August or hear a trumpet call.

I doubt that the trumpeter was thinking about his lost son when he played, at least not consciously. I know from congratulating him later that he had been thinking about which horn to use. I suspect that if he were thinking about his son, he probably wouldn’t have been able to play. Rather, that loss is now a part of him, embedded in the DNA of his personhood, that mingles with the fibers of his heart, mind, lungs, fingers and lips, that, connecting with the alchemy of Mahler’s own soul, moves us, without knowing why, to tears.

Note: These illustrations are from the exhibition, Forest Revelations, at the 510 Warren Street Gallery in Hudson, N.Y., from August 31-September 30, with a reception on September 1 from 3-6 p.m.

You can also see Carolyn’s work at the Artful Mind Gallery at 22 Walker Street in Lenox.