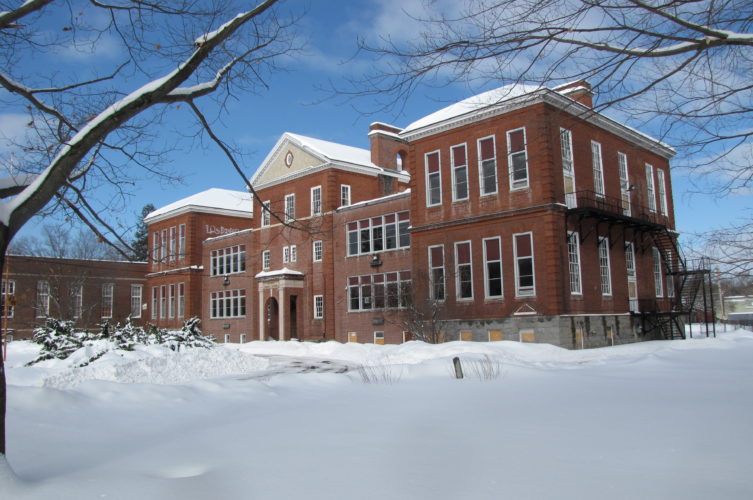 Great Barrington – The emergence of the Bridge Street corridor as an epicenter of significant commercial and residential investment is taking shape – and quickly.

In addition to the conversion of the former New England Log Homes site into a commercial and housing complex that will include the new home of the Berkshire Coop Market and that is expected to break ground later this year, a local hotelier is now eyeing the former Searles School along the banks of the Housatonic River, and across Bridge Street from the Railroad Street Youth Project, as the ideal location for a luxury hotel.

Chrystal Mahida and her husband, Vijay Mahida, owner of the Comfort Inn on Stockbridge Road, the Days Inn on South Main Street, and other hotel properties in Lenox and Pittsfield, appeared before the Historical Commission Monday (February 9) to begin the process of designating the school building, the annex and the adjacent gymnasium as a historic structure. With such a designation, the building is exempt from the 45-room limit imposed on hotels by a town bylaw that was originally intended to forestall a proposed convention center/hotel project at the Great Barrington Fairgrounds.

The Searles building is currently owned by Iredale Mineral Cosmetics, as the principal investor in Riverschool, the 2009 proposal to transform the dormant Searles and Bryant schools into a retail, business and residential complex. While the Bryant School on Church and School streets is being converted into Iredale’s world headquarters, the Searles School component has languished and remained undeveloped – until now, with this prospective sale of the former school to 179 Bridge Street Realty.

Originally, the Riverschool project that won the rights to develop the dormant, surplus school properties off Bridge Street consisted of a triad: Iredale Mineral Cosmetics, Community Development Corporation of South Berkshire, and New Jersey-based Canus Corp. Last year, Canus bailed out, failing to pay its portion of the sale price, and leaving Iredale on the hook for $640,000, which Iredale then paid in April.

At the 2014 Annual Town Meeting, town residents adopted a revision to the hotels bylaw that exempted hotel developers from the 45-room limit. It read: “The Special Permit Granting Authority may authorize a deviation from the room limits above [45 rooms] when hotels and motels are proposed as a component of a project that redevelops or reuses historic structures. Said structures are those listed on the State or National Register of Historic Places, a designated property in a Local Historic District, or determined in writing by the Great Barrington Historical Commission as historically, culturally, or architecturally significant to the town.”

Chrystal Mahida’s project – named 179 Bridge Street Realty LLC — is the first to engage the revised bylaw process, and although Mahida has not yet formally provided the Commission with detailed plans for the proposed hotel, it is likely to envision a facility with more than 50 rooms.

“You’re the test case,” declared Commission Chairman Paul Ivory, during the Commission’s session in the State Road Fire station. “I hope we get this straight.”

The commission scheduled a March 2 meeting to consider the proposed Searles School redevelopment, by which time the commission will have researched the historic, cultural and architectural legacy of the Searles building that was built in 1889 and renovated and expanded several times since.

At Commissioner member Bill Nappo’s insistence, Mahida will also have to submit a form confirming the historic nature of the property. A final draft of that form was one of the topics at the Commission’s meeting. Mahida’s attorney, Kate McCormick, that 179 Bridge Street would complete the form and submit further documentation of the project next week, in order to give the Commission a two-week window to review its plans.

“The judgment about determining the historic significance of the Searles School should be easy,” Nappo commented.

Ivory agreed, but he pointed out that “we have to have backup, in case someone challenges us. We are establishing policy, and it needs to be simplified. But it needs to be articulated.”

Commissioner Gary Leveille recommended the documentation as easy to fill out as possible.

“Businesses already have to jump through a lot of hoops, and to the degree we can, let’s keep it simple,” he said. “You can go the Mason Library and attach a Xerox copy of the historic narrative.”

As a first step, the project needs the Historical Commission to confirm – in writing — the historical, cultural and architectural significance of the former school building. The proposed hotel is taking advantage of a revised bylaw that allows hotels to exceed the current cap of 45 rooms, provided their projects involved the adaptive reuse and preservation of buildings of historic, cultural or architectural value. The final decision, however, rests with the Selectboard that would have to issue a special permit in order for the project to proceed.

But how much a project can alter the building and its annexes, and still meet the requirement of a historic preservation, is not clear.

Indeed, Commissioner David Rutstein pointed out that “the only reference to this building is in school reports.”

Rutstein continued: “Searles was designed by Searles [Edward Francis Searles of Searles Castle] architect Harry Vaughan, and it was the first and only school he ever designed. It was his vision of what a high school should be, but the rooms were too big. It was wrong from the start, and in 1938 it had to be renovated.”

He also recounted how the gymnasium was finally added in the 1930s – after several attempts to upgrade the school had failed to win voter support.

“The kids were having to play basketball in the basketball court that once occupied the second floor of Town Hall,” he reported. “At first the town said no to a gym, but finally it got approved. The school was renovated many times.”

From the audience came a question from Robert Tepper, owner of the Wainwright Inn on South Main Street.

“Do you have any authority over the historical character of the building,” he asked, “in case it is changed dramatically?”

“The style can be preserved,” responded Commissioner Malcolm Fick. “A good architect can sensitively prepare a design that will preserve the building. That’s the beauty of adaptive reuse, and it will add to the economy.”

In a phone conversation after the Historical Commission meeting, Town Planner Christopher Rembold clarified how far a developer could go in creating a viable economic enterprise that still maintained historical integrity.

“We deliberately wrote the new bylaw to be vague, so that each project could be evaluated on its own merits,” Rembold explained. “You could imagine that demolition is anathema to historic preservation. On the other hand, you could get a new structure that pays homage to history. It all depends on what the Selectboard is willing to do.”

And he added: “Given the fact of previous renovations to Searles, you could ask what exactly is historical about it. I hope the Historical Commission will say.”