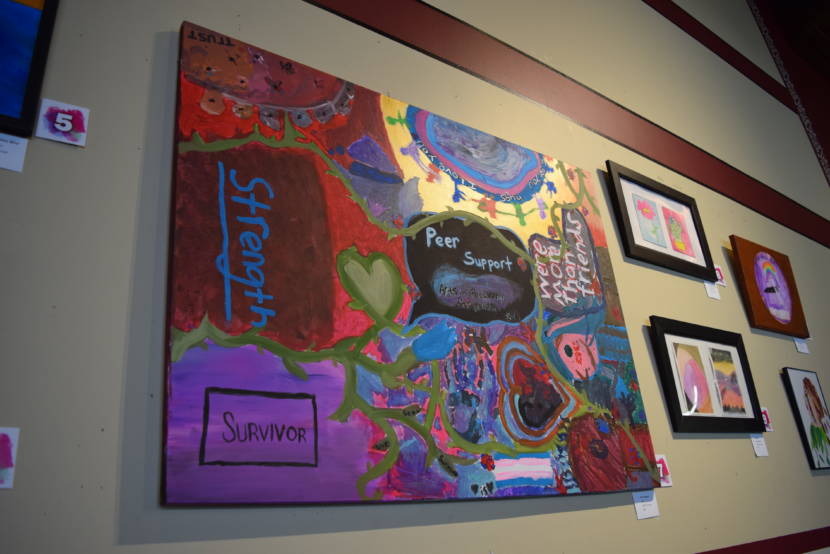 Artworks hang in the Colonial Theatre in Pittsfield as part of the 'Love Yourself' art exhibit, which supports youth suicide awareness and prevention. Photo: Katie Watts

Pittsfield — Raymond Brown has always had a keen interest in film; he grew up writing screenplays with his friends, “but no one ever wanted to give a group of 12-year-olds their camera, so I never got to film,” said the 26-year-old city resident in a recent phone interview.

Brown went on to pursue music instead, but that all changed after what he called “a rough summer, [one] that culminated in a handful of suicide attempts.” In October, Brown crossed paths with Arts in Recovery for Youth (AIRY), an arts- and skills-based peer support program for youth who struggle with suicidal thoughts or behaviors or who have survived suicide attempts. On Sunday afternoon February 10 at the Colonial Theatre, the fruits of his labor over the past four months will be on display for all to see.

“I gave it a shot,” said Brown, whose recovery led him not only to find out about this group for young artists, but also to Marney Schorr, the founder/director of AIRY. “If I’m being candid … I honestly don’t know if I would still be here if I’d not met Marney,” said the filmmaker, whose documentary “Messages of Hope” will have its premiere at the Colonial Theatre, 111 South St., this weekend. As Valentine’s Day approaches and overtures of love for others swirl through the air, Schorr is helping to spread a particularly poignant message: Love Yourself.

Schorr has spent the past two years at the helm of an organization aimed at offering therapeutic resources for suicidal youth. In fact, in a scant two years, AIRY has helped 57 suicidal young people to stay safe. On Sunday, Feb. 10, from 2 to 5 p.m., the community is invited to enjoy a day of celebration, community education and awareness in support of youth suicide prevention.

For Brown, of Brown Out Pictures, this is his first take at a documentary, a skill he has gleaned through his work with AIRY. “That’s how I met Marney,” he said. “I’m a second-year film student [and] she latched onto that,” he remembered. “She wanted to have a discussion about what I do and how it [can] help others.” At present, Brown has completed what he calls the “first cut” of his movie, which is not yet feature length; it currently runs 24 minutes and has great potential for expansion. “It’s going to continue,” said Brown. “I’m going to refine it.” Which, like all important work, is ongoing. After years working on music videos, Brown landed in this niche quite by accident. He explained the role of AIRY as instrumental to his creative process: “[The group] more or less helps to teach coping skills through the lens of artistic expression.” Brown went on to explain that he and his peers learn different ways to cope with suicidal ideation, which, Brown explained, is “when you have the impulses or ideas to end your life.” Participants then contextualize those concepts through different art projects they do together.

Sunday’s event, which hinges on collaboration, will feature opening remarks by Sen. Adam Hinds, D-Pittsfield; community talks by Schorr and Lee Watroba of the Berkshire Coalition for Suicide Prevention; Peggy Morse, a loss survivor; and various youth speakers, who will share stories about surviving suicide attempt. It will also feature an art show about recovery from suicidality, poetry, music and a dance performance by the Young Choreographers Initiative at Berkshire Pulse in which the choreographers interpret artwork in movement. YCI, which is under the direction of Susan Quinn, gives young people a voice and a forum to express their viewpoints through movement. “Young people need to feel that their voices are heard and that they can make a positive difference in their communities and in the world”, said Montano, founder/artistic director at Berkshire Pulse. “The YCI collaboration with AIRY artists was inspired by this need,” she added, “and supporting young artists in their process of creating and sharing their voices through dance in this way is a core value of the Pulse Performing Arts Program.” Since its inception in 2016, YCI has been instrumental in exploring the fact that today’s youth are faced with myriad landscapes that leave many feeling disempowered and unheard. The goal of this collaboration with AIRY is to aid in lessening the stigma associated with suicide and to raise awareness of the issue in teens and young adults both locally and nationally. Acoustic musician Grace Ida Marks and members of the BTG Kids Chorus will also perform.

“Marney pushes us to show up,” said Brown. “She is always there to help,” he added when asked what role AIRY has played in his life to date. “As a person trying to navigate life after a suicide attempt, [there is] a whole network to support you in need … that’s one of the lessons: to support each other. [AIRY] is certainly a huge part of my life now.”

The art exhibition, presented by Power of Art, will run through Monday, March 18, in the lobby at the Colonial Theatre, Berkshire Theatre Group’s Pittsfield campus. Sales of the art, created by students in AIRY, will benefit AIRY and BTG PLAYS!