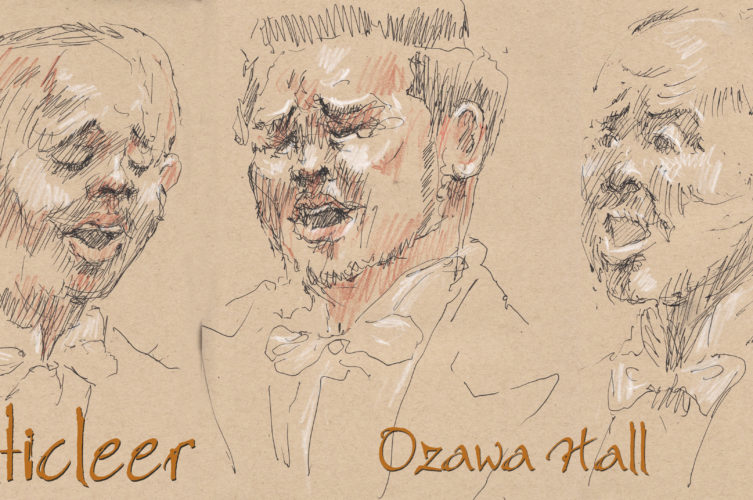 Here was at once a serious exploration of the harmonic and textural possibilities in madrigals written by female and male composers in the 11th, 12th, 15th, and 16th centuries, a revival of multicolored choral masterpieces by 19th and 20th century romantics, a sensual contemplation of passion and passage, a send-up of collegiate harmonizing, a celebration of the myriad marvels in folksong and gospel singing, and a contemplation of the differences in musical perspective in the lives of men and women.

The twelve-man group is composed of six countertenors (three altos and three sopranos), three tenors, one baritone, and two basses. Because of transportation difficulties in their six-concert tour, ranging from Ottawa through Ravinia to Rockport, they almost didn’t make it to Lenox. Perhaps, as frequently happens in the music world, their anxiety dissipated on coming on stage to a full and responsive house, giving extra energy to the performance. Whatever the stimulus, there wasn’t a dull or disappointing moment. 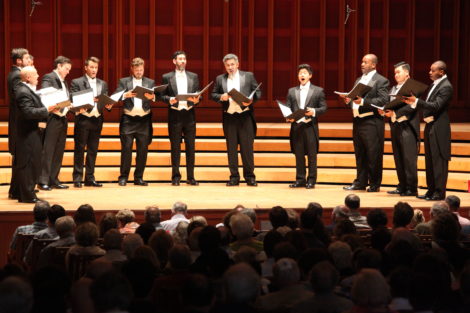 Between Giovanni Palestrina’s “Joy be yours, glorious one” and Tomas de Victoria’s “Queen of Heaven, rejoice,” eloquent in antiphonal exchanges and dramatic dynamic variations, one singer announced the group’s relief that the concert could start on time, adding, “We’re in the middle of an intense cross-USA tour . . . enjoy the conversation!”

And what a conversation it was! Where the opening two pieces, by male composers, featured antiphonal exchanges and the familiar sustained syllabic emphases of the madrigal canon, the third, by a nun, Hildegard von Bingen, gave insight into the beauties of convent singing.

Her “O virginous branch” featured a hummed F drone in the baritone and basses, supporting rich harmonic progressions. A gorgeous, vibrato-free, ornament-rich soprano solo delivered this text in Latin: “You grow and blossom with such nobility like the breaking dawn.”

Chanticleer’s ensemble sound shimmered, with seamless shifts in tonality and refined and accurate articulation of the texts. The high-to-low balance shifted as well, in coordination both with the 2-part counterpoint and the emphases of solo expression. These devotional anthems provoked an immediate and palpable spiritual elevation.

Francisco Guerrero’s “Hail, most holy Virgin” was uttered softly, its syllables more subtly defined, in a wash of coloristic harmony, with moving progressions such as F Aflat Bflat C Eflat, and F Eflat C Bflat. The music, versifying, and performance melded seamlessly. Two-part counterpoint graced the verse, “Hail, ever glorious precious pearl, like a beautiful lily, as full of perfume as the rose” across a harmonized top line and fast-moving unison baritone and basses.

“Moving from the reverent to the irreverent,” the next announcement, introduced “two sexually-charged 16th century madrigals.”

“Oime, if you are so fond of hearing ‘Oime’ spoken, why do you make whomever says ‘Oime’ die?

If I die, you’ll be able to hear only one languid and sorrowful ‘Oime.’

But, my sweetheart, if you will let me draw life

From you and you from me, then you will have

Thousands and thousands of sweet ‘Oimes.’” 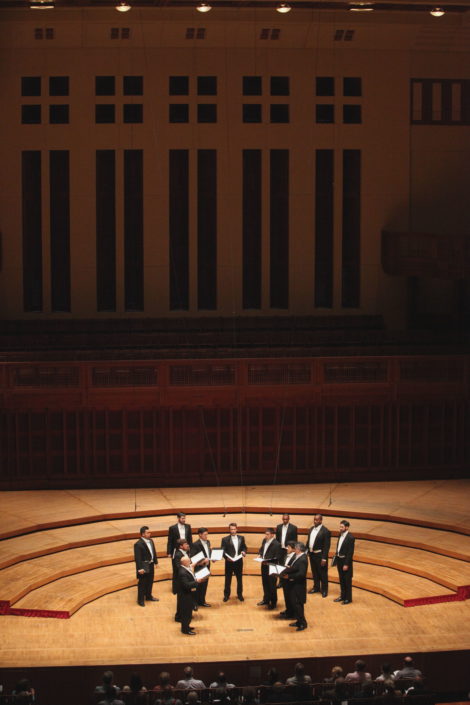 Here, the four sopranos and four altos were ranked in front of one another on the left, and the single baritone and three basses on the right. Back and forth went the ‘Oimes’ in a passionate and intense conversation across the “sexes,” as it were, underpinned by startling harmonic progressions, building to the lighthearted, final G, B, G cadence.

Fannie Mendelssohn’s “Handsome Stranger” and her brother, Felix’s, “Water Ride” (“Schone Fremder” and “Wasserfahrt”) were both written in gently-rocking, 6/8 time, the first including striking romantic harmonies descended from late Beethoven, and backing a splendid verse, “Here behind the maple trees, in secretly darkening splendor, what do you murmur, as if in a dream to me, fantastic night?” (text by Joseph Eichendorff)

The second song summoned metaphors of a lagoon and a loss, ending, despite the sense of sadness in the Heinrich Heine poem, in a philosophical major cadence:

“Appearing on the far horizon

A city, with its towers

Shrouded in the evening dusk.

A damp gust of wind eddies

The course of the grey water;

With a mournful rhythm

The boatman rows in my boat.

The sun lifts itself once more

Glowing upwards from below the horizon,

And shows me that place

Where I lost what is dearest to me.”

Chanticleer’s singing of both the Mendelssohn songs powerfully evoked of the sentiments of the text, with accruing and diminishing volume, precise and emotional articulation, and a sweet palette of accents on the most affecting melodic turns.

The female and male compositional qualities bespoke respectively the fear and hope of the mysterious nighttime encounter and the allusive and unarticulated identity of the beloved: squirreling lines and hushed contrapuntal passages alluding to the love’s mysterious grip; as opposed to melodic metaphors reflecting the boat ride, and an inchoate, ambiguous, and veiled emotionality, and, perhaps, even, his difficulty in clearly characterizing his feelings. “Venus and Mars, anyone?” the evening’s title would seem to ask! In reply, this reading listener would say, “Who knows?”

Still more ambiguity pervaded Chanticleer’s Johannes Brahms’s “Vigil I [Nachtwache I], ” Opus 104, No. 1, to the text “If you open an ear, open a loving heart and, if none opens to you, let the night wind carry you sweetly back to me.”

Lush harmonic sweeps gave Chanticleer the opportunity to celebrate Brahms’s vividly-expressed emotional registers that, in association with the poem, resonate to contemporary speculations about his sexuality and its attendant conflicts in his time.

Notwithstanding, this was a committed, beautiful performance, glowing in its attention to musical and textual subtleties.

There were no answers to the sexuality question in this concert, and by no means is it evident that Chanticleer intended to alert the audience to this discourse. But, dear reader, these are singing men from San Francisco, with open eyes and hearts, as well as ears and mouths!

Apropos the “He Said/She Said” theme, here is musicologist Jan Swafford, the author of “Brahms: A Biography” (Macmillan), on the freighted relationship between musician Clara Schumann, accomplished pianist and composer and friend Robert Schumann’s wife, and Brahms. In the linked Guardian article, Brahms’s complex sexual history is delineated less allusively.

“After a protracted decline, Robert died in 1856, whereupon Brahms and Clara were free to declare their passion, to marry. The couple went on holiday to Switzerland to sort it all out. Exactly what he said to her we will never know, but it amounted to this: Cheerio. I’m off to Hamburg. Write if you get work.

Clara put him on the train, staggered home, and told her journal: “I felt as if I were returning from a funeral.” Daughter Eugenie later said that Clara could never understand why Brahms so ruthlessly turned away. Clara took up her performing career with a vengeance; it was her solace and, she would tell Brahms, “the very breath of my body.”

Moving to another, lighter emotional palette, the first of Maurice Ravel’s “Three Songs,” describes a young woman, “Nicolette,” who with sagacity and humor, evades a growling wolf in a compressed version of the familiar story line: the creature invites her to Grandmother’s house.

After running away, Nicoette then meets a most attractive page “with blue shoes and grey doublet”, and soon thereafter, an old lord, “twisted, ugly, stinky, and fat.” The latter offers her gold coins, and “good Nicolette” runs to his embrace, “never to return to the field.”

This delicious bit of agrarian nonsense was offered with precisely articulated, staccato syllables. The delightful final verse counterpoised the pesante plodding of the rich old man with the chirpy, flighty delight of the security-seeker, or, should you prefer, gold-digger.

After admission, the concert’s most astounding technical feats took place during meditations on love and death by two young American composers. Both works were commissioned by the Chanticleer ensemble.

“Let me go to the window,

Watch there the day-shapes of dusk

And wait and know the coming

Of a little love,”

the pedal point and the intense choir executed a phenomenal gradual crescendo from pianississimo to fortississimo on the word, “window.” You had to hear it to believe it!

In the program notes, the composer explained the meaning of this technique in her program notes: “In my piece . . . I reflect Sandburg’s enraged voice with a relentless ostinato (a repeating gesture) coupled with dissonant chords; for the poem’s softer side, I employ lush harmonies to anticipate the “coming of a little love.”

In Eric Whitacre’s (b. 1970) hymnal “A Boy and a Girl,” sustained, syllables gave elongated emphasis to seamless ensemble. His harmonizing thoughtfully tracked the sensuous exhilaration of the first two stanzas, but the word “underground’’ was wracked with sudden dissonance, and the last four lines were separated by long pauses of, say, three seconds, and then, astoundingly, without visible cues, another dense chord, at a precise interval.

“Stretched out on the grass

As the waves exchange foam

Stretched out on the beach

The effect was spellbinding. You could hear a pin drop in Ozawa Hall.

As an antidote to this nearly unbearable turn of fate, Chanticleer offered a sentimental balm for the crowd, a send-up of collegiate a cappella. A Whiffenpoof-y treatment of Rodgers and Hart’s “My Romance” from the musical, “Jumbo,” was amiably adorned with barbershop and jazz modulations and inflections, blowing its seams on the succulent phrase, smoothly set forth by the choir:

The way my most fantastic dreams come true

“I Feel Better,” (with overlaid jazz, gospel and barbershop harmonies);

“Everything Has Changed” (featuring the charming phrases, “We kissed like we invented it “ and “We make the moon a miracle,” stomping, and clapping on the offbeats);

“Plenty Good Room (In My Father’s House),” with a deep blues sensibility, and preachable moments intoned in falsetto by alto Cortez Mitchell over clapped offbeats;

“Keep Your Hand on the Plough” ending with a stunning sequence of half-step modulations on F, F#, and G major chords, tossed off with such a casual aplomb that the impossible sounded easy.

Chills went up many spines, and a prolonged ovation followed, The chorus of twelve good men emerged from the Green Room immediately to meet the audience under the Ozawa Hall portico. Many enjoyed the opportunity to chat and to purchase one of their large selection of CDs. Disclosure: your reviewer was among the happy buyers.