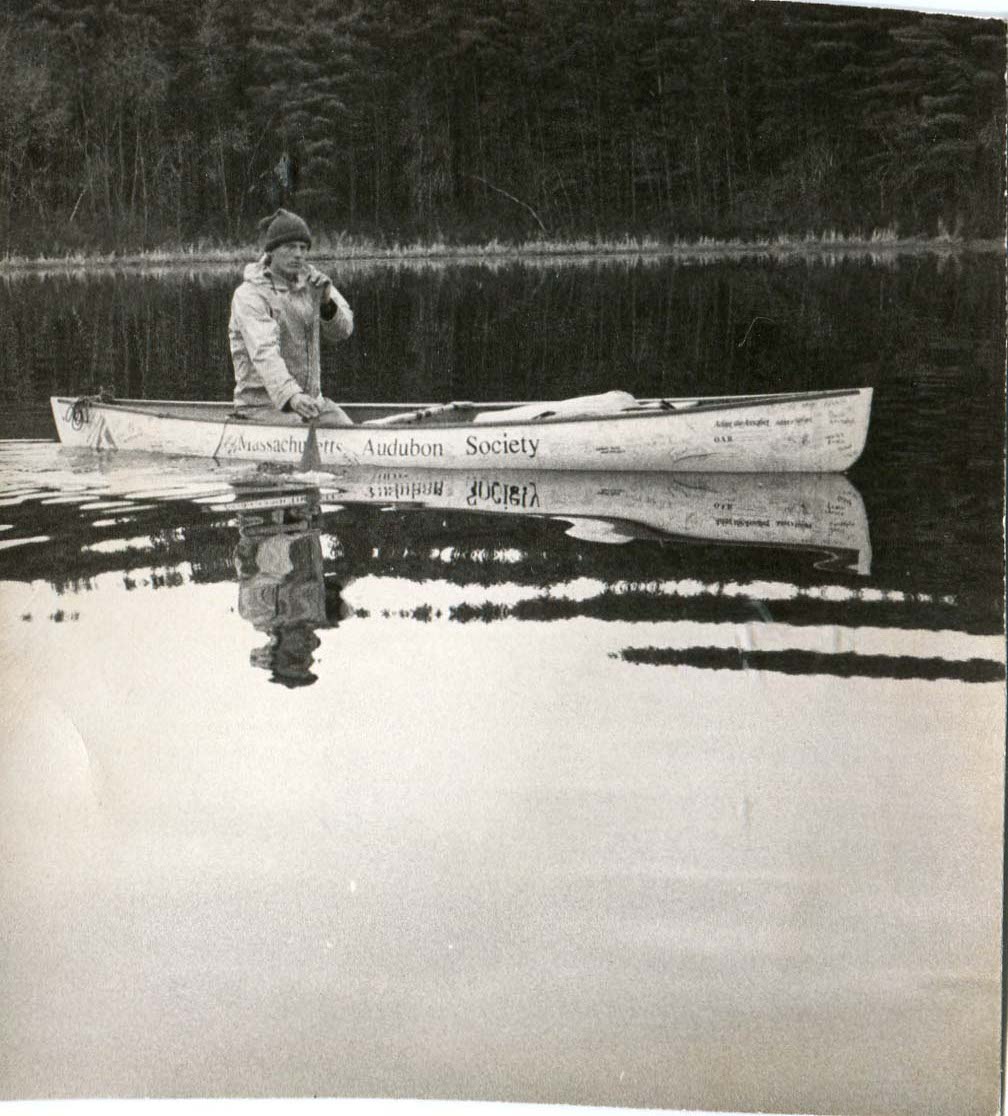 Stockbridge — Denny Alsop is about to give a gift to the Housatonic River, and rivers everywhere, without using money or anything else except the spirit of odyssey and love, using a white canoe as a petition, and a 69-year-old body.

It will be the second time for Alsop, who will travel the Housatonic and other waterways from the Connecticut border to Boston, one at a time. That was in 1988, and he did it as a winding and moving meditation on his love of clean water, and to say something, not with words but with action.

Alsop calls it a “journey of conscience” for an embattled river, and for water everywhere.

Nearly thirty years have passed, and Alsop will again launch a canoe from a Trustees of Reservations property at Bartholomew’s Cobble on March 21, prompted by the most recent struggles, he said, over the Environmental Protection Agency’s (EPA) proposed “Rest of River” cleanup of polychlorinated biphenyls (PCBs) from the Housatonic, discharged there by the General Electric Company (GE), and the agency’s struggle to get GE to remediate the toxic pollution.

“This is not about me,” Alsop said. “It’s all coming to a point where I feel like I can do my little thing — a symbolic push — bringing attention to what all the warriors along this river have done and what they are doing. I’m the messenger not the hero.”

It is a political message, carried to the Statehouse quietly and with a peaceful heart.

“What I discovered is it’s not what happens when you get there,” Alsop said. “When you start you declare where you’re taking the message, and along the way it’s the idea that you would dare to carry a message for people to Boston or New York or D.C. Along the way is where the magic happens.”

A lifelong Stockbridge resident, outdoorsman and retired logger, Alsop said he will need to get another canoe — the one he used in 1988 is too beat up. And while it is a “solo journey,” his family helps him launch a canoe that people along the way can use waterproof markers to sign messages. His daughter has promised to bring two granddaughters to the beginning of this trip, and he’s hoping a grandson will come too. His grandson, he said, is the same age his son was when he helped his father push the canoe into the river in 1988.

“A generation has passed, and it’s time for action,” he said.

Photographer and Housatonic River Initiative (HRI) board member Benno Friedman says Denny’s voyage is not just about Housatonic river. “PCBs are ubiquitous in the world,” he said. “We all carry body burdens of PCBs.”

Friedman, who with others birthed HRI at his Sheffield kitchen table in the mid-90s, says while Alsop is representing HRI he is making the trip to shine a light on the idea of clean water everywhere.

Friedman likens the EPA’s proposed Rest of River cleanup to an operation on an accident victim. “It is possible to bring things back to a relatively pristine condition despite the difficulty and momentary pain.”

Indeed, it will not be pretty. GE will have to dredge contaminated, toxic sediment and dispose of it. The possible economic effects and disruption worries some residents and business owners.

“Body parts opened up, the blood and guts,” Friedman said, before the patient is “sewed up, and a time of healing.” He said it is critical to take the long-view, and to know different sections of river can be enjoyed while others are being remediated.

Friedman is in it for love too, something both he and Alsop developed during their 1950s childhoods near the Housatonic, so polluted they couldn’t go in. Alsop used to cross the river on the walk to school in Stockbridge. “In those days you could look off the bridge and see what color the dye lots were in the paper mills in Lee,” he said. “So much of that has been improved with the Clean Water Act. Now we’re dealing with something else.”

At his parents’ second home in Sheffield, a six-year-old Friedman asked to swim in the river. “No, it’s dirty,” his parents told him.

Alsop says his voyage across the state, in which he will have to portage here and there, isn’t a “protest journey.” Even on his 1988 trip, when a Boston watershed bill was under attack in the senate, he “made a very strange decision not to mention PCBs once, and the reason I did that was because I felt the river was thought of as being an appliance, an industrial appendage, a depressing place, and what I wanted to do was communicate how beautiful it was and how exciting it is to travel on a river that size in our own communities. Why go to the Arctic when you can canoe up the Housatonic?”

He also thinks we should “celebrate our successes on this river,” particularly the “EPA/GE mitigation of the first mile and a half below the [GE] plant.” He’s had a look at it. “I can’t tell the difference from before. They’ve done a really good job, which means if we all pulled together we can do powerful things for the river.”

Housatonic River Walk’s Rachel Fletcher told The Edge that when Alsop got to Boston in 1988, “he reported to state officials and anyone who would listen that the only clean water he encountered along the way was the water in his 5 gallon jug.”

Fletcher said Alsop inspired her work to restore and care take the Great Barrington sections of the river, and create a place where people can enjoy it.

“At the time I didn’t even realize there was a Housatonic River. But Denny’s odyssey captured my imagination like lightening and I found myself following each step of his journey on a map. Without understanding why, I was totally obsessed.” She was working at Community Land Trust, which was next to the present Rite Aid on Main Street, she said, when she looked out the back window. “I discovered a riverbank choked with trash and the remains of Melvin’s [Pharmacy] fire. How can we be a land trust and not address this mess in our own backyard, I wondered. That was the beginning of River Walk.

We began with a small section of riverbank cleanup in honor of Denny.”

The hard work of paddling this time of year, especially upstream, is symbolic, Friedman said. “It defines the journey that HRI and the other groups are facing to go against the current of inertia and indifference.”

Many Berkshire County residents are joining an effort to stop GE from dumping the contaminated sludge in landfills in Lenox Dale, Lee and Housatonic, rather than shipping it out of state to certified landfills as the EPA has proposed. The company says it will cost $250 million more to take it away. Friedman says the “squeaky wheel” grassroots method is the one that will work here.

With GE’s “largesse” strewn about to the larger, more polished, influential organizations and businesses, Friedman says, its just regular people, “grassroots and unpaid volunteers,” who are the “engines of change in our world.”

“Grassroots has nothing except bodies,” he said. “Bodies are the cleanest, most direct representation of what it is that the people want. And if the bodies show up and say this is what we want, that’s probably the only time politicians might reverse their course.” But, he added, “people have to get off the couch.”

While Denny is just one, Friedman says he might be “pivotal…by doing something difficult and uncomfortable.”

While Alsop’s journey may help the growing Berkshires movement to make GE clean up its mess, he’s not coming at it from outrage.

“It is inspired by my own recognition many years ago that I was happy when I was around clean water, and I looked around me and realized that clean water was slipping away from us…I’m not a poet, I’m not a writer, but I do know how to paddle a canoe, and this time, I know how to reach Boston.”

It’s also springtime, season of “rain and hope,” and people are “getting out into their gardens,” he said. “We’re suggesting the connection to rivers that so many people feel. This comes from love.”

Alsop will provide the Edge with dispatches from his trip. Stay tuned