Sheffield — Louise Mudge Halstead passed away peacefully at home on April 3, 2017, at the age of 91.

Louise was born November 18, 1925 in German Flats, N.Y. Her parents, Erwin and Florence (Minton) Mudge, predeceased her as well as her husband, Irv H. Halstead, and son, Gary D. Halstead. 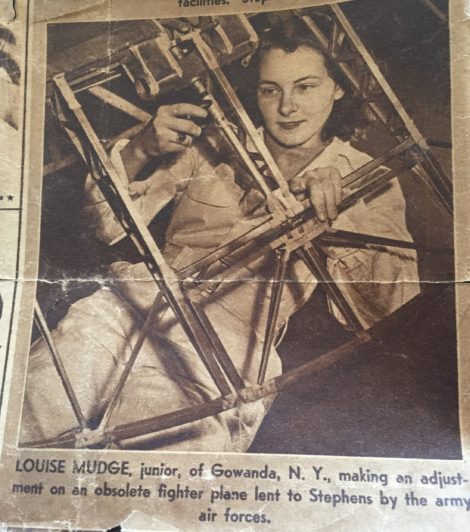 Louise was very ambitious. She graduated from Gowanda High School in 1943. She then went on to study aviation at Stephens College in Colombia, Missouri, where she learned to repair and pilot airplanes.

On July 29, 1946 Louise married her husband Irv, and they began a life together raising three children, Gary, Pamela and Wendy. Once the children were older, Louise attended Westchester School for Medical and Dental Assistants in New York, where she graduated in 1974. She then studied nursing at Phelps Memorial Hospital in North Tarrytown, N.Y., and became a private duty nurse. Later in life, Louise and her husband moved to Venice, Fla., where she continued her career as a nurse. Louise and her husband spent many summers at their second home in Monterey, Mass. In 1999, they sold their house in Monterey and moved to Florida as full-time residents. In 2004, Louise moved to Sheffield to live with her daughter and son-in-law, Wendy and Richard Hill, after the passing of her husband.

Louise was an avid tennis and golf player for many years. She also loved reading, game shows, crosswords, and some would say she was a professional tag saler. Louise loved her family, and they loved her right back.

There will be a small private family service at the home of Wendy and Richard Hill for the family members.

Donations in memory of Louise M. Halstead may be made to Hospice of Western Mass through FINNERTY & STEVENS FUNERAL HOME, 426 Main St., Great Barrington, MA 01230, who is caring for the arrangements. To send remembrances to her family please go to www.finnertyandstevens.com