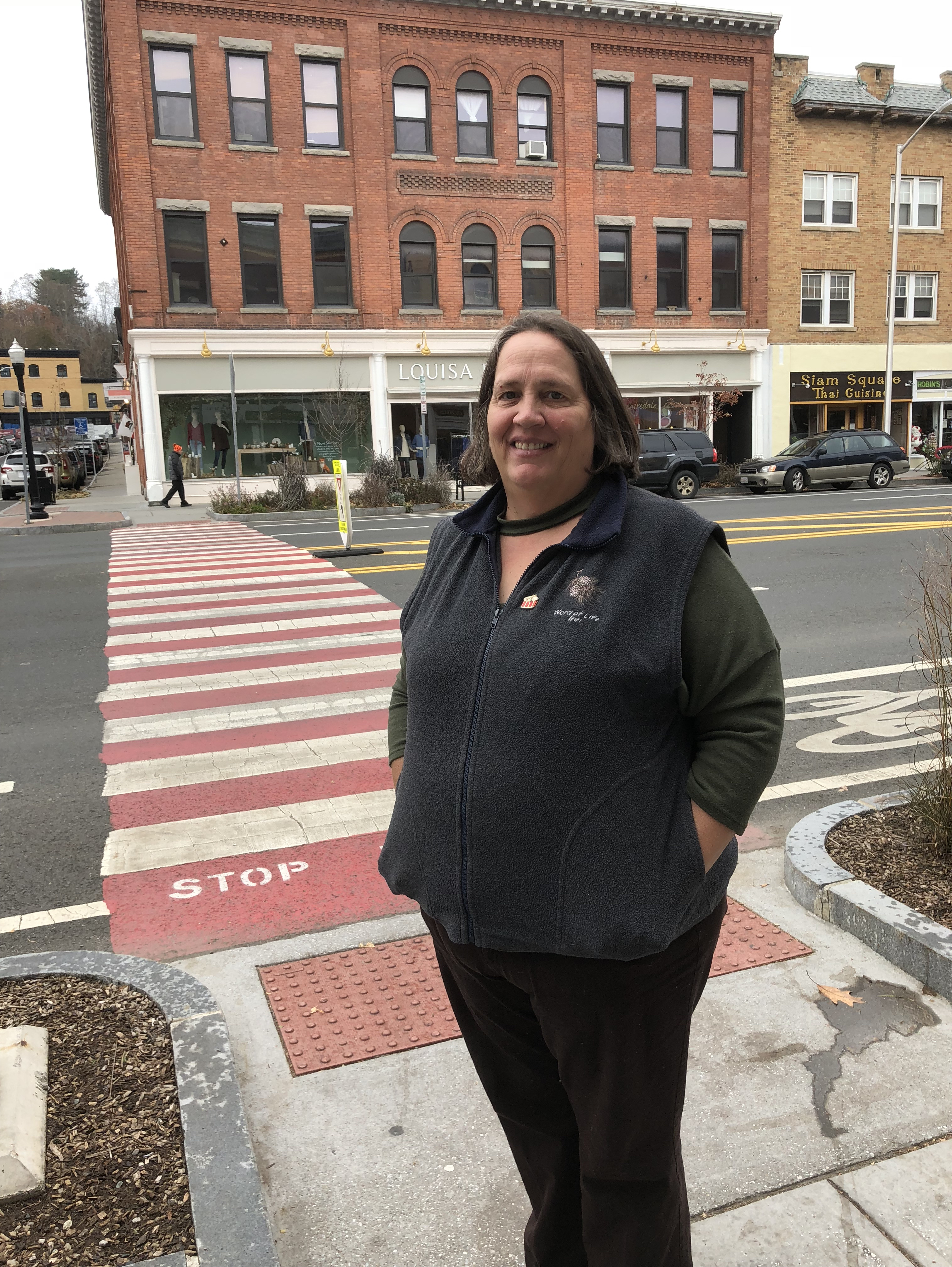 Gifts can be delivered in unusual ways. I received two recently — one in a plastic evidence sleeve, the other over a cup of coffee.

It was a week ago Friday, a grim, gray November afternoon in Great Barrington, that I was in my studio when I received a call from the Great Barrington Police Department. I had just settled down at my desk with another cup of coffee from Fuel Coffeeshop across the street, ready to dig into another feature for The Edge, when my cell phone lit up. The screen said it was a call from GBPD.

“Mr. Scribner,” said the officer the other end of the line. I was expecting information about an accident or some other emergency. “This is Sgt. Adam Carlotto of the Great Barrington Police Department. We have your wallet.”

I straightened up, reached for my back pocket. Empty. How did that happen? And when? I thought.

“Where did you find it?”

“We didn’t. A woman found it in the crosswalk in front of Fuel, and brought it down here a few minutes ago” he said.

I walked to the studio window overlooking Main Street three stories below. The red and white lined crosswalk was luminous in waning late afternoon light.

The police station is an unassuming one-story brick building, across from the intersection with Route 23, south of town, next to Aroma, the Indian restaurant. The windows of the station were dark, but there was a light showing through the station’s recessed entrance. 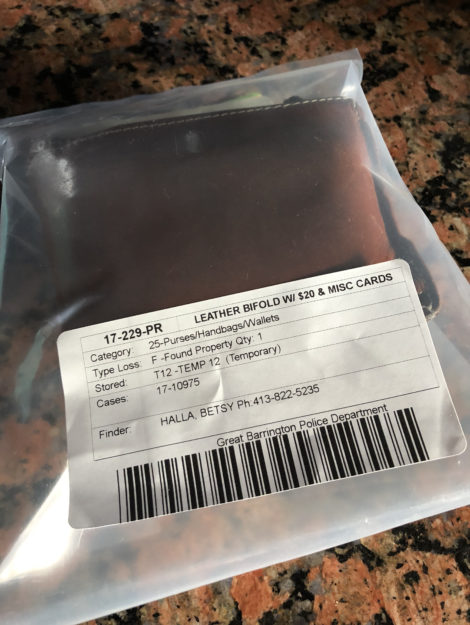 Inside, at the desk, Sgt. Carlotto placed a plastic bag on the counter, labeled, bar coded, with a description: “Leather bifold w/$20 & misc. cards.” I checked. Credit cards, driver’s license, even my passport card were in it.

“Who brought it in?”

“Her name is on the label,” the sergeant said.

Betsy Halla, I read, was the finder.

“I’m going to call her to thank her.”

“You’d be surprised how many people don’t make that call,” Sgt. Carlotto remarked.

As I left the station, with my billfold once again tucked into a back pocket, it struck me again how desperate I would have been had Betsy Halla not taken the trouble to rescue that wallet into which were stuffed the essential elements for navigating life.

I did call her the next day and told her I wanted to thank her in person. She lived in Pittsfield, she explained, and is working as an intern at Monument Valley Regional Middle School for Dom Sacco, part of her requirement to earn a bachelor’s degree in social work.

We agreed to meet at Fuel on Monday. I told her I’d be wearing a black worker’s hat.

“I see things out of the corner of my eye,” she said, as we sat down at a table with our coffees and I had told her how grateful I was that she took the wallet to the police. “I was on my way to the Big Y, and stopped at the crosswalk for you to walk across. I saw your wallet drop out. And I said to myself, ‘I can’t not say anything. It’s a person’s life.’ So I started looking for a parking place. I did a U-turn, then another at the Berkshire Bank, came back and finally found a place to park. I went back to the crosswalk and picked it up. I asked a few people on the street if they knew you, where you might be, and then I took it to the police. Some people would say it’s not their problem, but not me.”

How lucky I was, I thought, that this was the person who happened to be driving on Main Street at the moment I was walking back to work.

Betsy Halla has lived in Berkshire County for 37 years — currently in Pittsfield — and is the mother of six children, ages 11 to 34. Her 17-year-old is a senior at the Milton Hershey School in Pennsylvania. She’s enrolled in Elms College, through Berkshire Community College.

“He’s a senior and I’m a senior. We’ll both be graduating next year,” she noted.

“I love it here,” she said of the Berkshires. “It’s so beautiful. The only thing that frustrates me is the cultural events are too expensive. But I love to hike.”

She and her eldest son have hiked most of the Maine leg of the Appalachian Trail, negotiated 200 miles of the Long Trail in Vermont, and they’ve taken part in the Greylock Ramble since his son was three years old.

Companionship is not the only experience she looks forward to on her hikes. “My own favorite thing to do is to take photos on a hike, snacking on my own baked goods, climbing to an overlook where I can play my trumpet. I generally play ‘Amazing Grace’ and other hymns. That’s me in a nutshell.”

She recalls how one August she was on the Appalachian Trail with her son, near what they knew as Constellation Peak in Massachusetts, when it started to rain. They walked until they came to a shelter, and there they met the filmmaker Scott Herriott who was shooting his 2011 film ‘Flip Flop Flippin: One Man’s Search for Character(s) on the Appalachian Trail.’ When the rain stopped, she played ‘Amazing Grace’ for the camera. 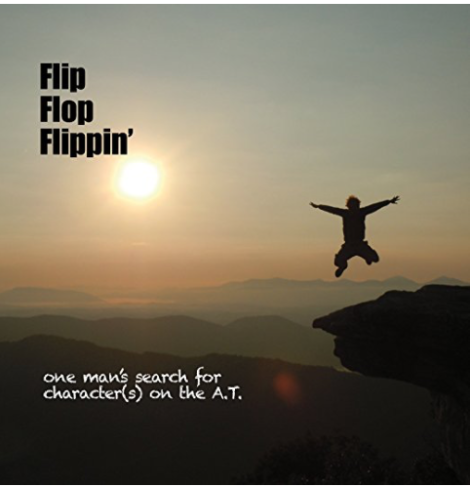 She also plays the trombone, baritone and French horn, and has been playing in churches for 45 years, and for 20 years she’s been playing her trumpet at baseball games at Wahconah Park. “I do ‘Take Me Out to the Ballgame,’ ‘God Bless America,’ and the ‘Star Spangled Banner.’ ”

When not on the trail, or at the ballpark, she accompanies services at the Living God Fellowship church behind the Jenifer House in Great Barrington.

“Here’s how I started playing the trumpet,” she went on. “In fourth grade, the music teacher gave everyone a flute, and if you did well on it, you got to choose an instrument. I picked coronet because I like the name and the photo of it.  Then I went to the baritone horn and trumpet.”

For now, however, she’s working toward a degree in social work. She was named Caregiver of the Year by the Home Instead Senior Care Center in Pittsfield. “I was reading a story for a client,” she recalled, when the client said, ‘You need to go back to school.’ So I did. First, I went to Berkshire Community College, where there is an arrangement with Elms College. So I spent one year at BCC, then enrolled in Elms in 2016.”

Betsy looked at her watch.

“I have to go back to work,” she said. We shook hands, and again I thanked her, this time not only for retrieving a wallet but also for being a most remarkable, giving person. Meeting her and learning a little of her life was a more significant gift than receiving a belonging I hadn’t realized I’d lost.