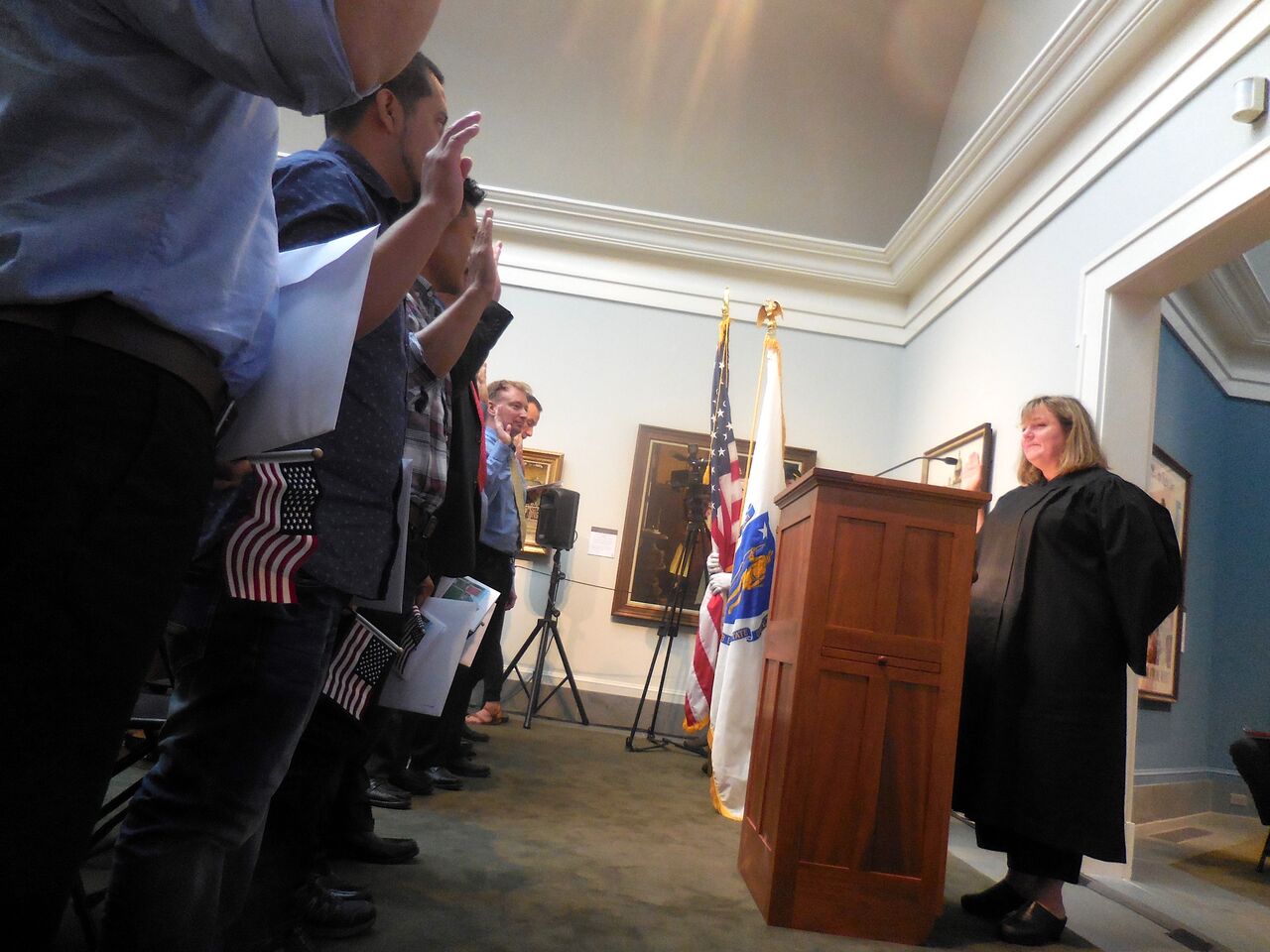 Stockbridge — The newly minted citizens were beaming. Their families and supporters were either smiling or, in some cases, crying as 23 western Massachusetts immigrants from 16 countries and five continents took the oath of allegiance and became citizens this morning.

And you could hardly have chosen a more suitable location for the ceremony. The Norman Rockwell Museum celebrates the work of perhaps this nation’s most iconic painter, one whose images of small-town America have become touchstones of a simpler time.

Before the immigrants raised their hands and swore to “defend the Constitution against … all enemies foreign and domestic,” the museum’s center room had to be turned into a courtroom, as per state law.

For the seventh year, the museum has partnered with the Berkshire Immigrant Center for the event. The ceremony, held under the auspices of the U.S. Citizenship and Immigration Services, is for residents of western Massachusetts who have immigrated to the United States from around the world. The special event gave members of the community the opportunity to greet fellow residents as they were sworn in as new naturalized citizens.

See video below of the citizenship ceremony held at the Norman Rockwell Museum, in partnership with the Berkshire Immigrant Center:

“I know I speak for all of us when I say we look forward to this all day long,” said Brooke Mead, who heads the immigrant center. She added that the museum is “the most inspiring of backgrounds for a naturalization ceremony.” Click here to read an Edge story from last year when Mead was first appointed to lead BIC.

Joan M. McMenemy, first justice of Berkshire County Juvenile Court, was on hand for the third year in a row to preside over the ceremony and swear in the new, naturalized citizens. She offered words of wisdom for them.

“A good citizen would never be afraid to welcome people from all corners of this planet and never forget the vital role that people who have immigrated to this country … have played throughout history in building this nation, in service to this country and enhancing the life experience of all,” McMenemy said, with a VFW color guard at her side.

Lina Orozco Grillon, a Pittsfield educator and herself an immigrant from Colombia, sang “The Star-Spangled Banner” and “America the Beautiful.” Joseph Forte, supervising officer for the U.S. Citizenship and Immigration Service’s Lawrence field office, then made an announcement:

“We have some welcoming remarks from the president of the United States,” Forte said, eliciting barely audible gasps from some members of the audience.

In a videotaped statement of about two minutes, President Donald Trump welcomed the new citizens. When he finished, Trump, who has limited support from the immigrant community, got only scattered polite applause from the 250 or so attendees in the three center rooms of the museum.

Before the swearing in, Forte advised the candidates to proofread their certificates carefully. A typo or mispelling could delay their final swearing in by days or weeks.

After the 45-minute event concluded, the Edge tracked down a couple of new citizens. Taha Bouras hails from Morocco and has been in the U.S. for five years. Most of his family members still live in Morocco. He works at Kripalu, the yoga and wellness resort in Stockbridge. Bouras was accompanied by several of his fellow co-workers.

“It’s a big day,” he said in a brief interview.

Asked if he felt relieved that his day had finally arrived, Bouras replied, “It’s been a long process. It took almost, like, six months. Finally becoming a citizen is a really big thing. Most of the people are looking forward to this day. So here we are.”

Asked if he wanted to live in America for the rest of his life, the young man laughed: “Well, yeah. Why not?”

The journey to citizenship had been longer for Magdalena Mieczkowska, who is originally from Poland. She’s been here for 16 years, having originally come to America to attend the City University of New York.

Mieczkowska runs Magdalena Events, an event planning and design company, out of her Egremont home. She has also worked in London but loves the Berkshires.

“I am relieved,” Mieczkowska said. “It’s been a long process.”

Asked if she was ever worried about the outcome during the citizenship process, Mieczkowska replied, “All the time. The system is awful. The system is broken. It is hard to navigate.”

Mieczkowska said she was told she would get her citizenship about a month ago. Asked if she jumped for joy, Mieczkowska said, “I did. And I cried.” Mieczkowska has a sister who lives in New York City. The rest of her family lives in various locations in Europe.

But there was nary a dry eye in the house when Justice McMenemy quoted the great author and Holocaust survivor: “A good citizen truly embraces the meaning of the words spoken by Elie Wiesel when he said, ‘No human being is illegal.'”