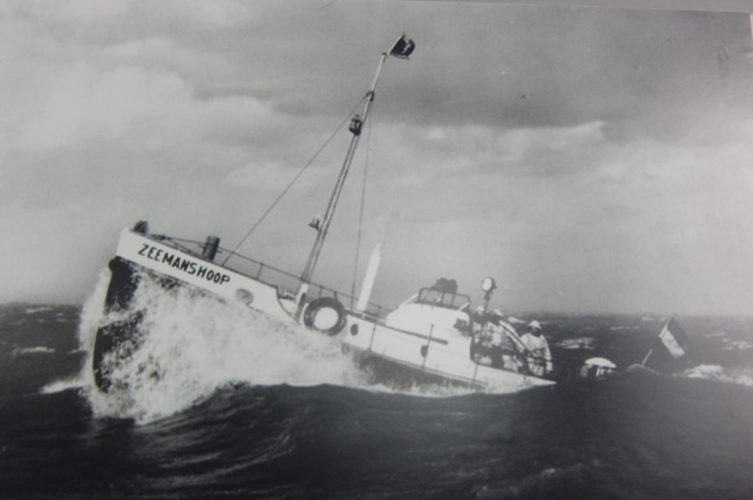 Seventy-five years ago, on the day the Dutch army capitulated to the Germans, four Dutch students had the bright idea of hijacking a lifeboat in the harbor of Scheveningen just as the enemy tanks were rolling into their town. It was the only boat to make it out of the harbor that day. As the students were trying to start the engine, dozens of desperate refugees jumped on board as well, and the Zeemans Hoop, meant for a crew of no more than four, set off for the coast of England with 46 passengers packed on deck like sardines. Avoiding mines and evading German U-boats, they were finally rescued by the British destroyer HMS Venomous 26 hours later. The naval captain told them that the tides had been taking them hopelessly off course: instead of England, they had been headed for the Atlantic Ocean.

Of those 46 brave but foolhardy souls, only two are still alive today: Sheffield resident Loet Velmans, 92, and his friend Karel Dahmen, 96, of Texas. The two men were honored on Thursday, May 14, on the 75th anniversary of their escape, in a dockside ceremony attended by Dutch and British dignitaries, their own children and grandchildren as well as the families of the other passengers who had flown in from as far afield as Australia, the U.S. and the UK, and the crew of a British Navy vessel. The original lifeboat, so aptly called The Seaman’s Hope, had been lovingly restored just in time for the occasion. Loet and Karel were taken for a spin in her around the harbor, marveling at how the little boat could possibly have held so many people. After hearing an engineer’s lengthy account of how close the boat had been to capsizing, Loet said, “I had no idea of the danger, I don’t know if many of us did. I just wanted to get away and fight the Nazis.” He added that he couldn’t help comparing his own plight to that of today’s boat people in the Mediterranean and elsewhere, risking their lives for a chance at freedom.

Loet Velmans has described the memorable voyage in his memoir, Long Way Back to the River Kwai.