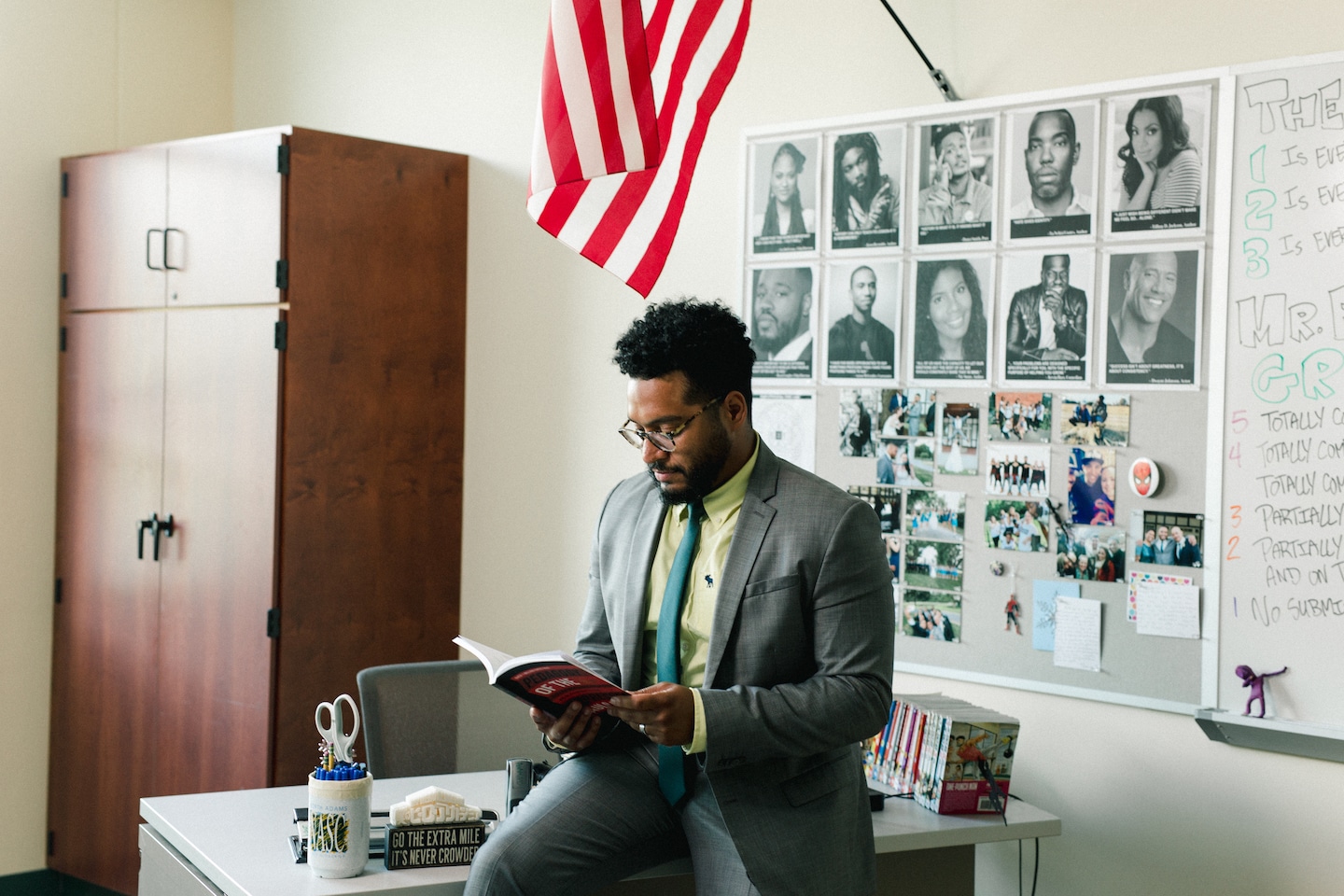 Sandisfield — I was reading “Salvage the Bones” by Jesmyn Ward when the pandemic hit in mid-March. The 2011 novel, part of the ninth-grade English curriculum at the school where I tutor, explores the plight of a working-class African American family in Mississippi as they prepare for Hurricane Katrina and follows them through the aftermath of the storm; when my paperback copy got stranded in Sheffield, I turned to an audiobook. I’ve not looked back since. Suffice it to say, my library card quite possibly saved me during the past six months. A quick tally reveals that I’ve read about 25 titles, many of which came on the recommendation of Jamal Ahamad (the teacher of African American literature at Pittsfield’s Taconic High School whom I profiled here last week). Ahamad, who joined hundreds of teachers across Berkshire County in getting back to school this week, spent much of his summer connecting with his Instagram following as a means of sharing book picks and his rationale behind said suggestions.

“Adultifying our Black youth in classrooms effectively strips them of their childhood, which then normalizes the pressures and stress that they experience,” he shared via Instagram back in March. Ahamad went on to tag two short story collections — “145th Street” by Walter Dean Meyers and “Look Both Ways” by Jason Reynolds — both of which “capture what it’s like to be young, Black, unique, respected, understood and embraced by a community.” My 13-year-old daughter and I quickly made our way through Reynolds’ book, thoroughly enjoying the 10 stand-alone stories that chronicle 10 different journeys home from the same school, each told from the perspective of a different middle-school student and informed by their unique challenges. While little of the landscape was familiar to us — from an urban school and apartment complexes to city blocks and crossing guards — the challenges are universal and therefore resonated: the death of a sibling and divorced parents to bullying and homophobia.

When an email from the Southern Berkshire Regional District arrived in July inviting students to participate in a community summer read, I was ecstatic: “Stamped: Racism, Antiracism and You” by Jason Reynolds was the middle-school read. “Let’s get something straight,” Reynolds says in the book’s opening lines, “This is not a history book. I repeat, this is not a history book. At least not like the ones you’re used to reading in school …This is a present book. A book about the here and now. A book that hopefully will help us better understand why we are where we are as Americans, specifically as our identity pertains to race.” During this time of acute national turmoil — as the senseless death of unarmed Black people at the hands of police continues — a theme erupts: Amplifying marginalized voices is imperative. Furthermore, those of us whose privilege precludes our being targeted due to the color of our skin — when jogging through our neighborhoods; sleeping in our own beds, in our own homes; driving in a vehicle with our children — have a responsibility to listen carefully at present.

“You don’t know what you don’t know,” is Ahamad’s stance, one that led him to create #StoriesWithMrAhamad (you can follow him on Instagram @misterahamad_c213). In Season 1 he covered more than 10 books with a goal of “working on representation [of Black authors]”; in Season 2, he introduced movies to complement his book picks, all of which was cut short by the pandemic; Ahamad is currently working on Season 3, which he is curating in response to a central question: “What books can we read to inform us about what’s happening in the world that can challenge our thinking and move us to action?” Each 15-minute episode hinges on Blackness, Black culture and Black history, and includes titles ranging from “The Narrative of the Life of Frederick Douglass” (the 1845 memoir and treatise on abolition written by famous orator and former slave Frederick Douglass during his time in Lynn, Massachusetts) to “Articulate While Black” (the 2012 book by authors Geneva Smitherman and H. Samy Alim, the subtitle of which is “Barak Obama, Language and Race in the U.S.”).

“Even though I love doing this series [from] my classroom … I just couldn’t wait to get back to my classroom to bring more books because — here’s the thing I learned — while reading over the course of the pandemic …and watching everything that happened in the news,” Ahamad explained, “It came to my attention that I really had to take the time to study books that were going to inform me about the world that I live in.” Ahamad’s insights on life, both in and out of the classroom, have absolutely helped me to navigate my own parenting during this difficult time, and I’m really grateful to him for that. Furthermore, I am in awe at the tremendous understanding he holds for others. “No one is going out of their way, I hope, to not know — it’s just that they’ve got other things happening. If I can slip it into someone’s news feed, why not?”

When we spoke by phone early last week, Ahamad was getting acclimated to “school hours” and had been up reading for several hours when we spoke at 9:30 a.m. In his hands? “Black Kids” by Christina Hammonds Reed, a novel that explores issues of race and class through the eyes of a wealthy black teen caught in the LA riots following the beating of Rodney King at the hands of LAPD officers in 1991). It carries hints of “The Hate U Give” by Angie Thomas, which captures the uneasy balance between the poor, mostly black neighborhood where Starr Carter lives and the wealthy, mostly white prep school she attends. The novel’s title, inspired by Tupac Shakur’s activism, references Shakur’s “The Hate U Give Little Infants Fu@#$ Everyone” concept and provides a crystal clear image of the systemic racism currently plaguing our system. After witnessing the fatal shooting of her childhood best friend, Starr suddenly finds herself — and her Black community — on trial while the white police officer responsible for Khalil’s death goes free.

Ahamad remains committed to his students, many of whom identify as Black and Latinx. The pandemic has brought to light issues of equity surrounding access — to technology, to internet, to time and space to pursue their studies when many young people are being asked to step up and care for younger siblings or get a job to contribute to household expenses. This, for Ahamad, is what has been so difficult. “[In these] unprecedented times, [we have been] making it up as we go,” he explained of the scramble to go online in March when schools closed. For the diverse demographic Ahamad serves in Pittsfield: “The kids had to keep on living; they weren’t gonna wait for us to make a decision and figure things out; a lot of my kids were old enough they wanted to work to help provide for their families and put money in their own pockets. By the time we decided it’s time to get back to school, they were well into their routines. So you know, that was an issue; and I’m never going to fault my kids for making clean money.” With school slated to open remotely on Monday, Sept. 14, he’s got his work cut out for himself and his students, twice as many of whom he will reach this year by teaching African American literature as a stand-alone subject while a colleague teaches the history portion.

Ahamad’s recommendations run the gamut from Professor D. Watkins — the drug dealer-turned-writer whose memoirs include “Living And Dying While Black in America” and “We Speak for Ourselves: A Word From Forgotten Black America” — to Nic Stone (whose YA books include “Dear Martin,” “Odd One Out” and “Dear Justyce”). Stone has taken to addressing anti-racism and abolitionism in daily Instagram posts. “When you look at those who suffer from police brutality, when you look at those who we rally for, they are not the Black people who are in the academic sphere,” Ahamad pointed out, adding “it’s not like Cornel West is the one being beat up; [or] Angela Davis, even though she was, right now she is not the one being beat up.”

Ahamad acknowledges the “gateway between the Black community that comes with education,” one he is often asked to comment on as the only Black teacher at Taconic. “But it’s not really me who is suffering, it’s the kids,” he explained, “which is why we should be listening to them and letting them speak.” This is why, over the course of 170 days this year, Ahamad will present myriad authors from disparate backgrounds offering varying perspectives. His doing so is absolutely deliberate: “I am trying to get my students to see that 1) Black people are not monolithic, and 2) You really have to be diligent in trying to hear other people’s stories or else you are going to be in a position where you don’t even know what you are fighting for, [or if] what you are doing is right.”

NOTE: Want to check out any of the titles mentioned here? This list, culled by Oprah Magazine, lists 125 Black-owned bookstores across the country that could use our support right now.