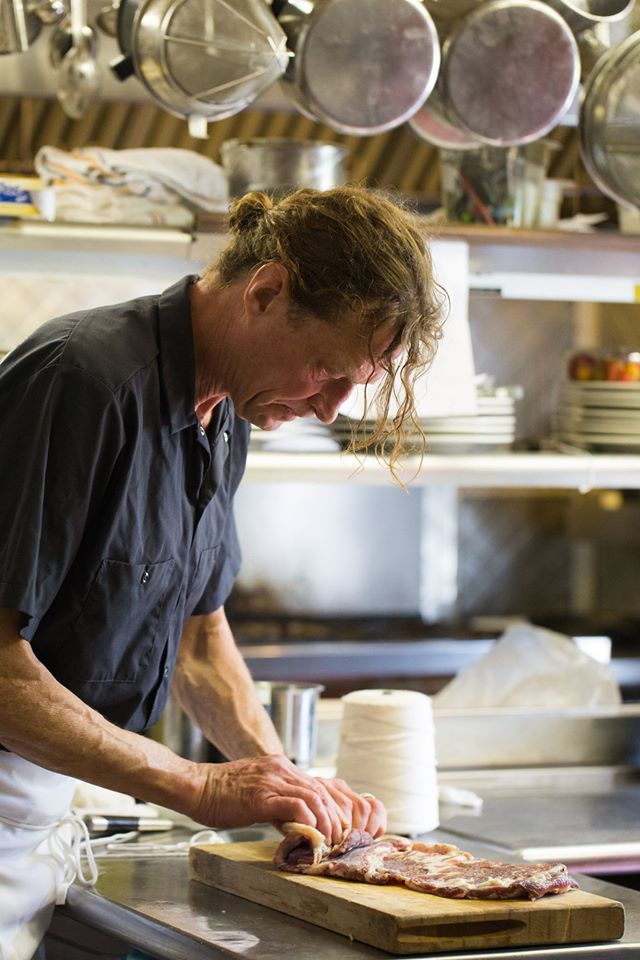 South Egremont — Some local restaurants call to mind candlelight — others, carry-out containers. A full three weeks into the state’s “new normal,” which precludes the luxury of sitting down to dinner at local establishments, restaurant owners and chefs have gotten creative out of necessity. “Restaurants rely on cash flow,” said Dan Smith of John Andrews Farmhouse Restaurant, who was leafing through a stack of online orders when we spoke by phone Saturday morning. “Most run on a very tight margin, [so] when cash flow stops, business grinds to a halt,” he explained. Smith, whose staff was accustomed to handling two or three takeout orders on a usual weekend night, is now juggling up to 40, which creates a mutually beneficial scenario: His restaurant doors stay open, his employees remain paid, and local farmers and food purveyors continue to receive his business. In short, ordering takeout, equatable to some as nothing more than a splurge, has become an essential cog in the economic wheel of the Berkshires during the unprecedented COVID-19 pandemic that continues to sweep the nation.

“The only way to keep employees paid was to bring in some income,” said Smith, who has been able to keep three out of four full-time kitchen employees on payroll; this past week, he brought another back who had been part-time. Counting these hands, plus several dishwashers working reduced hours and some waitstaff answering phones and assembling takeout orders, Smith has kept about 60% of his staff employed. Unfortunately, his bartender and bussers are not getting any work. Still, he is putting dollars back into the bigger picture. Last week Indian Line Farm had kale and spinach for sale; Rock City Mushrooms in Ghent, New York, is in full swing; and Smith is still sourcing eggs, dairy and some meat from local producers. These items, plus beets, potatoes and dried beans in cold storage from last year’s growing season, are finding their way into the trio of family-style menu offerings like spaghetti Bolognese, meatloaf and fried chicken currently on his menu. That said, fried chicken doesn’t necessarily pay the bills.

“You can’t support a business like ours on these things,” said Peter Platt of the Old Inn on the Green in New Marlborough. “We’re sort of just treading water until we can get back to normal business,” Platt told me in a recent phone interview. In the past three weeks, Platt has established somewhat of a cult following for his famous buttermilk fried chicken — available in small or large buckets, for $20 and $30 respectively — simple comfort food he regularly prepares for family and staff meals. He has kept his full kitchen crew, albeit with reduced hours, and they are busy “in one sense.” Takeout orders are coming in at a swift clip, around 50-60 each day, but with the average check being $20 or less, the profit is slim. “Every business is a little bit different,” Platt pointed out, in a nod to the fact that he relies heavily on lodging and catering clients, both of which have evaporated, to keep business humming. This, coupled with the fact that Jacob’s Pillow has cancelled its summer season, has pulled the plug on another $500,000 worth of revenue for Platt. “The whole business model is turned upside-down, which, in the Berkshires, is not unusual,” Platt said. Still, his bills remain, like $50,000 worth of insurance on his various buildings — including the Southfield Store, which remains open seven days a week — and his mortgage. “These bills do not go away,” he said.

Josh Irwin, of Cantina 229 in New Marlborough, continues to build his super-creative menus around what’s available. Ten days ago, that was chicken from neighbor Tom Brazie at the Farm New Marlborough. “We’re trying to keep the pricing down and not take a huge hit,” said Irwin, who is committed to building around those who surround him and his business. He could do it differently, particularly in these trying times, but that would be “going astray from our ethos, what our true values are,” Irwin explained. So he is staying the course. Last week Irwin approached Brazie and communicated that he was going to buy chicken from Jan Johnson at Mill River Farm to spread his business; Brazie was running out, down to legs and wings, and happily agreed. Johnson, as luck would have it, was sold out of chicken and directed Irwin to Sean Stanton of North Plain Farm, who reported that his farm store had never been busier. “We’re accustomed and willing to be creative with what’s available,” said Irwin, who hopes current times will create new ways of life for many. “Buying local is not just a hashtag, but a microresponsibility of [all of] ours,” he said. As people buy in excess from farm stores — as, for many, it feels safer than the grocery store — the local economy begins to work. Irwin sees it like this: If people were to consistently support their farmers in the same way they support restaurants, he imagines farmers could give better breaks to wholesalers, which could bring the price of meals down for the customer. “The reason [dining at many restaurants is expensive] is that we are paying a premium to support local,” he said. Looking ahead, Irwin envisions a world where consumers can go to the grocery store AND buy a local chicken on the way home “even if it’s twice the price.”

Irwin’s goal, since March 16, has remained constant: to get his staff paid as close to usual as possible, to break even and to time his next steps. “What needs to happen today so that, come Day 99, we’ve hit a trampoline and [can] spring forward?” is where his thinking begins most days. “I’m doing my best, [but] it’s not easy,” he said of navigating the new normal, which, ironically, he’s not pining to move on from entirely. “I hope that people just don’t go back to what they did before,” Irwin said, imploring individuals to “actually look at their new behaviors and try to adapt some of them [going forward].” In the meantime, Irwin and his team, who continue to don gloves and masks when preparing to-go orders from the Cantina kitchen, are using this time to create social credit, give back to the community, and think about our collective responsibility that goes beyond money “to ensure that when this is all over, we can propel ourselves into the world, [understanding that] the restaurant landscape will be completely changed.”

For Smith, the last few weeks have reminded him of the support that abounds. “It is a really great community here,” he said. “The outpouring of local traffic, from people buying takeout meals [for dinner] and gift certificates for the future, [has been] overwhelming.” And he has a feeling that takeout will continue to be a big part of his restaurant’s picture going forward. In this way, he is aligned with Irwin in his thinking that, in these challenging times, we will create a new normal. For Irwin, this results in teamwork; specifically “committing to the common goal, which can’t be money driven; especially in these dark times, there has to be a bigger picture of survival and positivity.” This community is nothing new, of course. But Smith summed it up well: “[This spring has been] a reminder of what a great place [the Berkshires are] to be in good times and bad.”